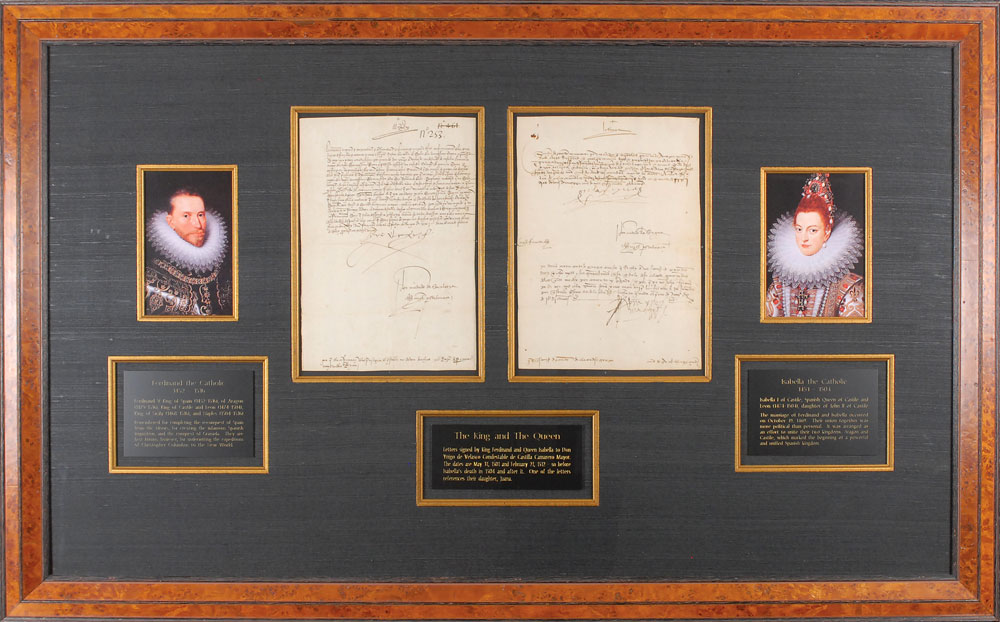 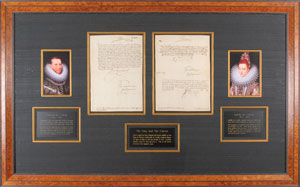 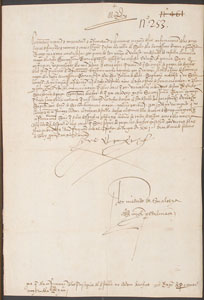 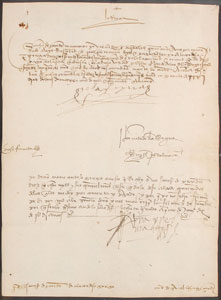 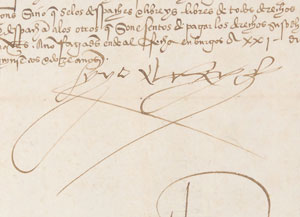 Pair of boldly penned letters in old Spanish. First, an LS signed by King Ferdinand at the center, "Yo el Rey,” [I the King] one page 8 x 11.5, dated February 21, 1512. Letter to the senior accountants of his daughter, Queen Joanna of Castile, in full (translated): “Senior accountants and reconcilers and confirmers and senior scribes of confirmations of privileges and chancellor and notaries and other officials who are in the office of the seal of the most serene queen and princess, my very dear and very beloved daughter: I have been informed by Don Yñigo de Velasco, constable of Castile, senior chamberlain of the said most serene queen and princess, my daughter, that he wished to have copied and confirmed the privileges of maravedíes in the form of bonds and other things that he has, and that if he had to pay the fees for the said privileges and confirmations, he would receive great injury, because due to the fact that he holds the said office of senior chamberlain of the said most serene queen, my daughter, he ought to be relieved of them. He petitioned me to order that he not be charged them, and taking into consideration the fact that the said constable holds the said office of senior chamberlain, and that the senior chamberlain has the same grounds to be exempt from paying fees of this sort as the others who are exempt in virtue of the ordinances of these kingdoms, and that already on a previous occasion I and the most serene queen, my wife (may she rise in glory), ordered that his father, the constable Don Pero Fernandez de Velasco, not be charged the said fees, on the grounds that he was our senior chamberlain, I thought it right. Therefore I order you not to charge the said constable or consent that he be charged any fees from the fees for his privileges and confirmations, but rather that you dispatch and issue them to him free of all fees, as and in the manner that they are issued and dispatched to the others who are exempt from paying the aforesaid fees in virtue of the said ordinances, and that you not do otherwise. Done in Burgos on the 21st day of the month of February of the year one thousand five hundred twelve.” Unable to cope with the tragic death of her husband Philip six years prior, ‘Joanna the Mad’ was deemed mentally ill and confined to a nunnery, with a large staff responsible for her day-to-day business.

Second, an LS signed by Queen Isabella towards the top-center, “Yo la Reyna,” [I the Queen] one page, 8.5 x 11.75, dated May 31, 1501. Letter ordering a Grecian countess be paid a large some of money, in part (translated): “I order you, from any maravedies you have received in any way by my order, to give and pay at once to the Greek countess eighteen thousand seven hundred fifty maravedíes, of which I make her a grant. And obtain a receipt, with which and with this my warrant I account you free and quit of the said eighteen thousand seven hundred fifty maravedies. And I order my senior accountants to admit and include in your accounts the said eighteen thousand seven hundred fifty maravedies. Done in Granada on the 31st day of the month of May of the year one thousand five hundred and one.” At the time of this letter, Spain was lending military help to the Republic of Venice in the Second Ottoman-Venetian War, fought over the contested territories surrounding the Aegean, Ionian, and Adriatic Seas.

Both letters are in fine condition, with some expected light handling wear; Isabella’s exhibits a rusty paperclip impression to top left corner which has resulted in a small hole (all writing remains unaffected). A gorgeous pairing of correspondence from Spain’s most sought-after royal couple. Pre-certified PSA/DNA.