As president of the Continental Congress, Hancock orders a “March to Albany” in 1776 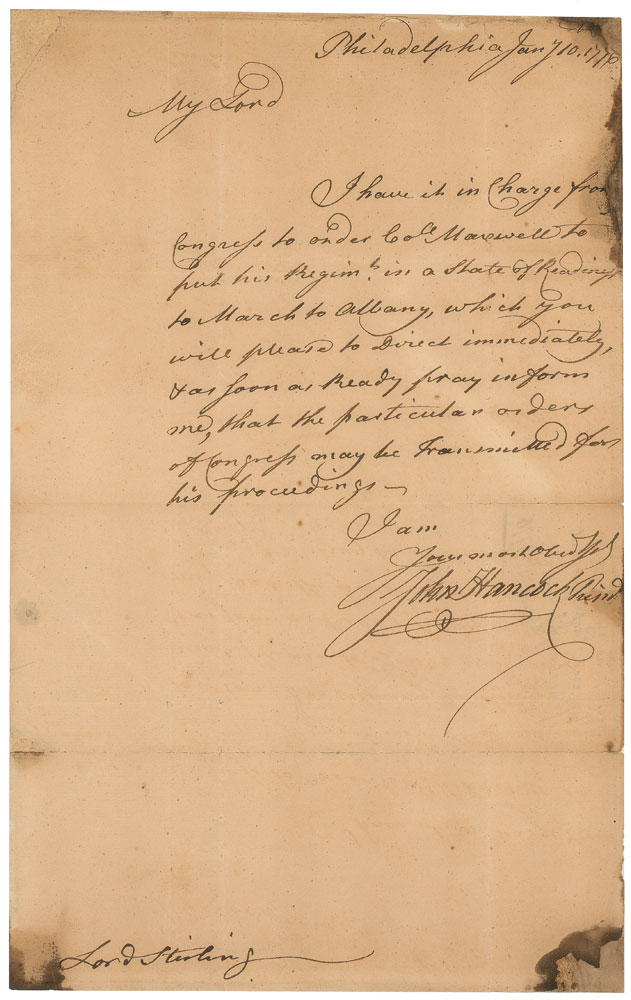 As president of the Continental Congress, Hancock orders a “March to Albany” in 1776

Revolutionary War-dated ALS signed “John Hancock, Prest,” one page, 8 x 12.5, January 10, 1776. Letter to Lord Stirling, in full: “I have it in Charge from Congress to order Col. Maxwell to put his Regimt in a State of Readiness to March to Albany, which you will pleased to direct immediately, & as soon as Ready pray inform me, that the particular orders of Congress may be Transmitted for his proceedings.” Letter is removably encapsulated in acid free Mylar. With intersecting folds, one through a single letter of signature, some areas of restored paper loss to reverse edges and corner tips, and some staining to upper and lower corners, otherwise fine condition.

With the Revolution underway, Hancock arrived in Philadelphia in 1775 and was unanimously elected president of the Continental Congress, the first national government of the United States. As public support for independence strengthened and Congress prepared to officially declare, Hancock dealt with their official correspondence, including select military orders. In this letter to the 2nd New Jersey Regiment’s Colonel William Maxwell, through Lord (General William Alexander) Stirling, he orders their preparation for a march to Albany, from whence they would begin their role in the investment of Quebec. This regiment and both men noted remained active through the entirety of the war, participating in such noted battles as Brandywine, Germantown, and the final Battle of Yorktown. Sending orders to two loyal Patriots who saw the war through to the end, this is a wonderful early Revolutionary War-dated letter in Hancock’s hand, penned just six months before he placed his famous signature on the Declaration of Independence. Pre-certified PSA/DNA.