Anticipating the 1824 election, Jackson denies his worthiness as commander in chief 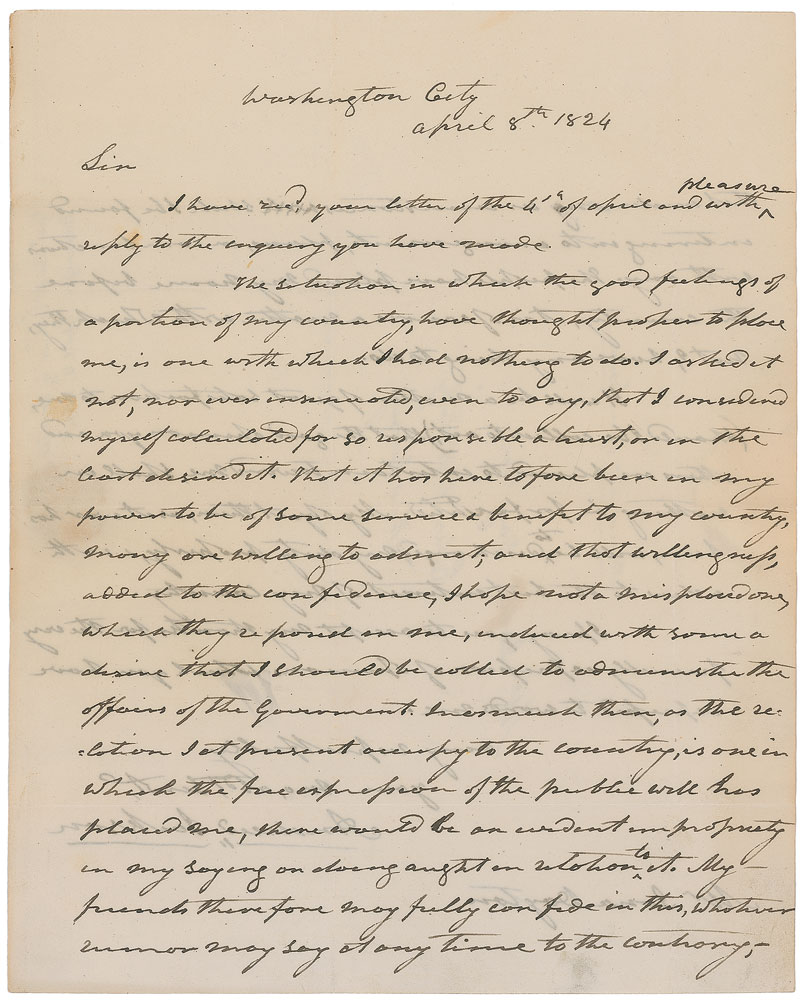 Anticipating the 1824 election, Jackson denies his worthiness as commander in chief

Boldly penned ALS, one page both sides, 7.75 x 9.75, April 8, 1824. Letter to Iona Dayton of New Jersey. In part: “The situation in which the good feelings of a portion of my country, have thought proper to place me, is one with which I had nothing to do. I asked it not, nor ever insinuated, even to any, that I considered myself calculated for so responsible a trust, or in the least desired it. That it has heretofore been in my power to be of some service & benefit to my country, many are willing to admit; and that willingness, added to the confidence, I hope not a misplaced one, which they reposed on me, induced with some a desire that I should be called to administer the offices of the Government. Inasmuch then, as the relation I at present occupy to the country, is one in which the free expression of the public will has placed me, there would be an evident impropriety in my saying or doing aught in relation to it. My friends therefore may fully confide in this, whatever rumor may say at any time to the contrary, that under no circumstances shall I be found entering in to arrangements, plans, or combinations with any. The people have placed my name before the country, it is of course a matter with which they, not I, have anything to do. It will be a matter of great satisfaction to me, (should I be called to act,) that the good opinion you and others are pleased to entertain toward me, shall in nothing be forfeited. My object then, as it ever has been, will be to discharge my duty properly, & with a view to the best interest of my country.” The reverse of the second integral page is addressed in Jackson’s hand and franked in the upper right, “Free, Andrew Jackson.” In fine condition, with intersecting folds, light scattered toning, show-through from writing to opposing sides, and expected paper loss to the second integral page from seal removal.

Widely viewed as a champion of the common man, Andrew Jackson was nominated as the Democratic-Republican candidate for the 1824 election with his chief competitor being John Quincy Adams, as well as the less formidable candidates Henry Clay and William H. Crawford. The election took a dramatic turn when Jackson led the popular vote and received the most electoral votes but—with the race split between four candidates—did not attain the 131 votes needed to win. The House of Representatives voted to determine the winner and selected John Quincy Adams, who appointed Henry Clay as his secretary of state. Jackson and his supporters were outraged and suspected collusion, calling the decision a ‘corrupt bargain.’ Jackson was determined to right this wrong, and unlike his sentiments in this letter he took an active role in his 1828 campaign, which became a brutal battle of mudslinging between parties and candidates. Jackson was successfully voted into office and served two terms, fulfilling the will of the people who called for him “to administer the offices of the Government.” Pre-certified PSA/DNA.