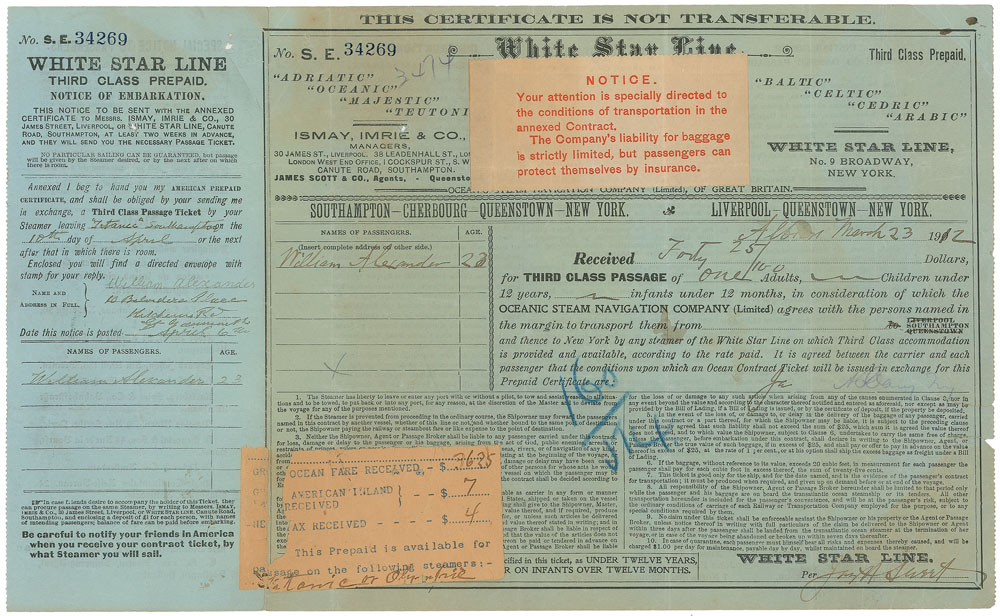 Partly-printed White Star Line certificate of receipt for Titanic passenger William Alexander’s prepaid third-class ticket, one page, 14 x 8.5, March 23, 1912. The receipt, issued at Albion, New York, indicates the name and age of the passenger, “William Alexander, 23.” The primary text reads, in part: “Received Forty 25/100 Dollars, for Third Class Passage of One Adults…in consideration of which the Oceanic Steam Navigation Company (Limited) agrees with the persons named in the margin to transport them from Southampton and thence to New York.” Attached to the left side is the notice of embarkation, number S. E. 34269, filled out with further details, in part: “Annexed I beg to hand you my American Prepaid Certificate, and shall be obliged by your sending me in exchange, a Third Class Passage Ticket by your Steamer leaving ‘Titanic’ Southampton on the 10th day of April.” A printed notice concerning conditions of transport and baggage liability is affixed to the upper portion of the certificate, and an additional detached receipt is filled out, “Ocean Fare Received—$36.25, American Inland Received—$7, Tax Received—$4, This Prepaid is available for passage on the following steamers:—Titanic or Olympic.” Receipt is accompanied by a small archive of correspondence concerning remuneration for the Alexander family after the tragedy. In very good condition, with scattered creases and toning, and several small edge tears.

The correspondence included is between William Alexander’s sister, Helen, who paid for the ticket, the White Star Line, and their lawyers. It seems that Helen filed a claim for reimbursement of the fares she paid for his passage, while her parents filed for compensation for his loss of life. One of her letters, dated February 3, 1916, in part: “I hope now the Titanic case is settled something will be done for me in regards of refunding my money to me at least the fares I paid for my brother Wm. The claim mentioned is for fares paid by myself nothing to do with life claim whatever.” According to the letters from the White Star Line and retained carbon copies from their law firm Hill Dickinson, the White Star Line had reimbursed her a total of $11 in 1913, accounting for the $4 tax and $7 train fare from New York to Albion; however, they did not refund the cost of the ticket itself. Alexander, a general laborer, was traveling to the United States in hopes of finding a well-paying job to support his parents back in England. The family would suffer further tragedy in 1917, when they lost two more sons in action during World War I. These Titanic certificates of purchase are quite rare, particularly with the ship identified in both the notice of embarkation and attached receipt. An outstanding grouping representing both the passage of the Titanic and the compensation struggles families faced in the wake of the disaster.