Recommendation to President Madison for the future Washington Monument architect 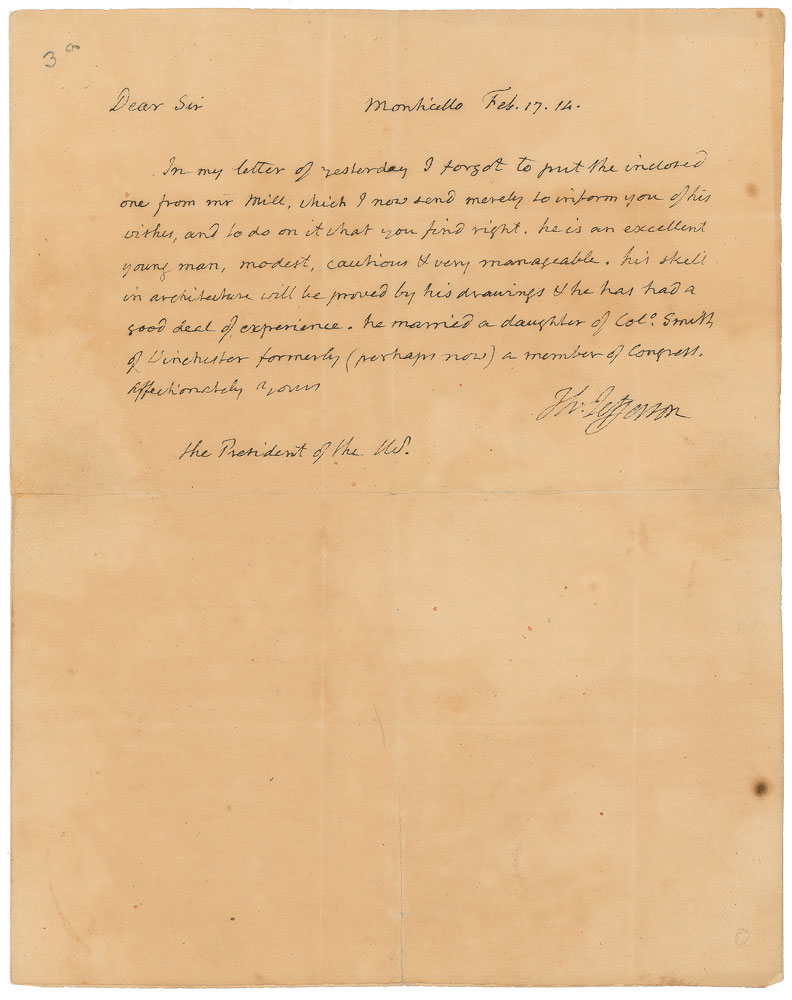 Recommendation to President Madison for the future Washington Monument architect

ALS signed “Th: Jefferson,” one page, 7.75 x 9.75, February 17, 1814. Letter to President James Madison, written from Monticello, in full (spelling and grammar retained): “In my letter of yesterday I forgot to put the inclosed one from mr Mills, which I now send merely to inform you of his wishes, and to do on it what you find right. he is an excellent young man, modest, cautious & very manageable. his skill in architecture will be proved by his drawings & he has had a good deal of experience. he married a daughter of Colo Smith of Winchester formerly (perhaps now) a member of Congress.” Reverse of second integral page is addressed in Jefferson’s hand to “James Madison, President of the US, Washington.” Professional restorations along intersecting folds and slightly irregular overall toning, otherwise fine condition.

When he was about nineteen years old, Robert Mills went to Washington to work with his mentor James Hoban on the construction of the White House. He met and befriended Jefferson during this time, who introduced him to the prominent British architect Benjamin Latrobe. In 1814, Mills won an architectural competition for the design of the first major monument honoring George Washington, to be situated in Baltimore. The cornerstone was laid in 1815 and construction continued for fifteen years, resulting in a colossal 178-foot tall marble column topped by a sculpture of Washington. In 1836 he won another competition, this time for a monument in Washington, D. C., with his stone obelisk design for the now-iconic Washington Monument on the National Mall. In the present letter, Jefferson supports Mills’s application to fill the position of Surveyor of the Public Buildings at Washington, recently vacated due to Latrobe’s retirement; however, it appears that Mills did not receive the appointment. Connecting three important presidential founding fathers—George Washington, Thomas Jefferson, and James Madison—with an architect who played a role in establishing the iconic neoclassical style of the Washington landscape, this is an absolutely extraordinary letter. Pre-certified PSA/DNA.