Remarkable WWII–era archive: “It is but the hors d'oeuvres to the big meal to come when the Germans are able to release their machines from the Volga” 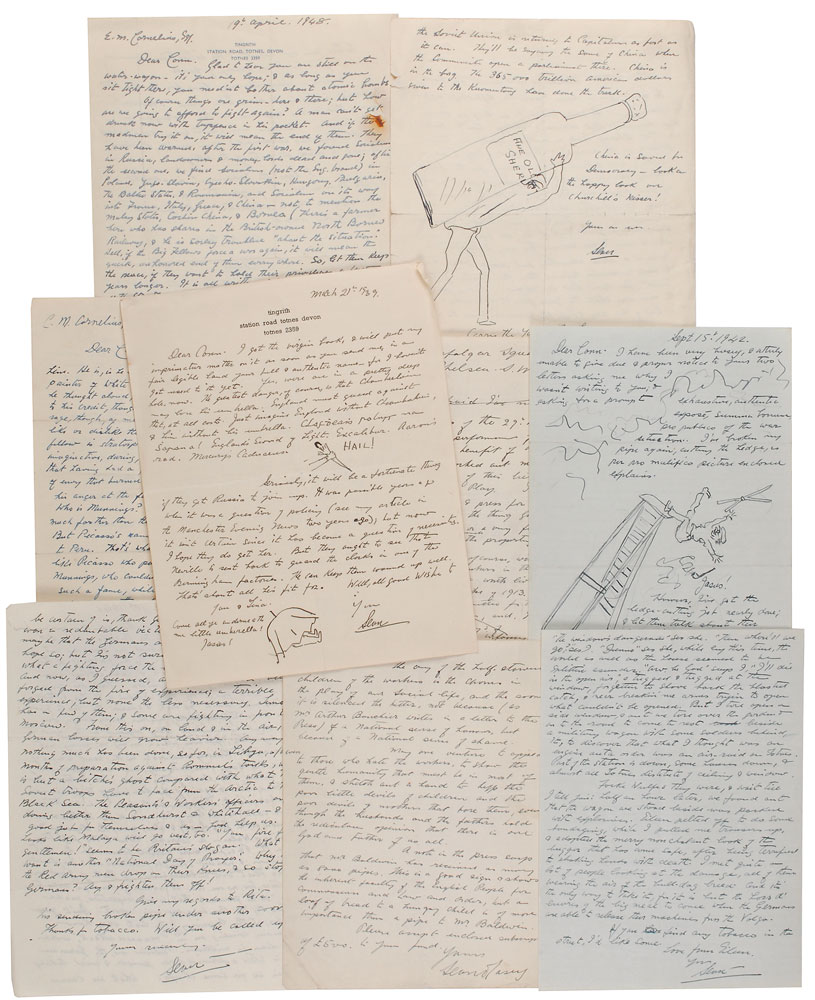 Remarkable WWII–era archive: “It is but the hors d'oeuvres to the big meal to come when the Germans are able to release their machines from the Volga”

Exceptional archive of approximately sixty autograph and typed letters, most signed “Sean,” ranging in date from 1933-1952. Letters are to MacDonald Ebenezer Cornelius [formerly McElroy], the son of O’Casey’s close friend, former business manager, and best man at his wedding, Billy ‘Mac’ McElroy. Mac was a coal merchant who had invested money in the 1926 London runs of both Juno and the Paycock and The Plough and the Stars; he was the inspiration for O’Casey’s play The Silver Tassie.

Many of the letters were written from Totnes during World War II, while his correspondent endured the Blitz in London, providing a running commentary on news coming in from the front, with lively pen-and-ink sketches in some of the letters.

One especially interesting letter describes his experience of an air raid on Totnes, dated October 1942, while news of the breakout at El Alamein was coming in. In part (spelling retained): “Last Wednesday, the sun shone cheerily here. I was helping Eileen to wash up a collection of crockery, when with a whizz and whizz, that made the house shake, an airoplane swept about over the house. Aha, says I, looking out of the scullery window, & catching a squint of the boyo going over the garage roof, aha, ses I, your engines outa order; & went back to the washing again, when a whizz & a whiz & whiz-bang went over us again, & this time where we were rocked like a cradle in the deep. We rushed into the front part of the house for safety, but that was rocking worse than the back, so back with us again, holding hands, to the back, but that was rocking more than the front; so off with us again—asking each other where'd we better go? quick like—to the front, but this part seemed to be splitting over our heads, before our faces, and behind our backs…the world as well as the house seemed to be splitting asunder. 'Aw, be God' says I, 'I'll die in the open air', & tugged & tugged at the window, forgettin to shove back the blasted catch, & near breakin' me arms trying to open what couldn't be opened. But I tore open a side window, & out we tore over the garden & on to the road to come to rest beside a military wagon with some soldiers behind it, to discover that what I thought was an engine outa order was an air-raid on Totnes. Part of the station is down, some houses down, & almost all Totnes distitute of ceiling & window. Focke Wulfes they were, & wait till I tell you: half an hour later, we found out that the wagon we stood beside was packed with explosives. Eileen pelted off to do some bandaging, while I pulled me trousers up, & adopted the merry nonchalant look of the bugger that has come safe, after being terrified to shaking hands with death. I met quite a lot of people looking at the damage, all of them wearing the air of the bull-dog breed. And it's the only way to take it, for it is but the hors d'oeuvres to the big meal to come when the Germans are able to release their machines from the Volga.”

Another, in part: “The dissolution of the 3 International has no significance just now. A hell of a lot of things have dissolved since this war began, & one thing more doesn't count a lot. This war is a big enough thing with which to grapple, without having to bother about an International. Should Shitler win, it would mean the dissolution of everything, including the International.” A third offers a straightforward glimpse into O’Casey’s shifting opinion of Churchill: “I was terribly mistaken in this man. I thought he wasn't what he is. He is undoubtedly a great man.”

Several letters also contain interesting content on subjects other than the war. One on the writer G. K. Chesterton, in part: “What a charlatanic shit he was to be sure. What a gay goboy he was! The Bell Branch of the Roman Catholic Church; the Bell Boy in the porch of heaven. God hid nothing from Chesterton…He was ably encouraged by Belloc. The greatest genius that ever lived, who carried about with him a penny catechism in one pocket and a fourpenny thriller in another.” Another on painter Alfred Munnings, in part: “Munnings? I didn't read about him. He is, is he not, as Joyce would ask, the painter of white & black and brown horses? Anyway, he thought aloud, and said his say. That was something to his credit, though he said it in a rage. It was the rage, though, of mediocrity against genius. Whether we like or dislike the forms Picasso's genius takes, the fellow is a stratospheric height above Munnings as an imaginative, daring, and prophetic artist."

In overall very good to fine condition, with edge tears and creasing to many letters, some dampstaining, and general wear. Accompanied by many carbons of Cornelius's letters to O'Casey; about thirty letters by Sean’s wife, Eileen O'Casey; and a few letters by Augustus and Dorelia John.