“The enemy under Forrest have crossed the Ten. below Clifton,” writes Grant in a tactical letter to McPherson as "the Vicksburg expedition” commences in 1862 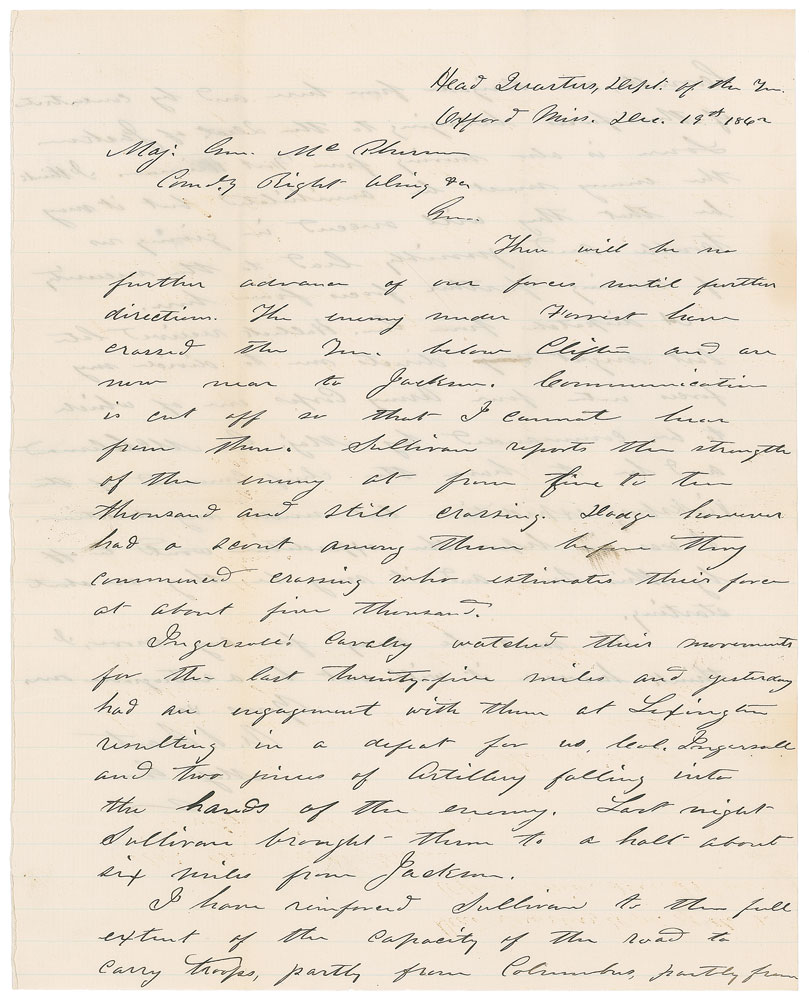 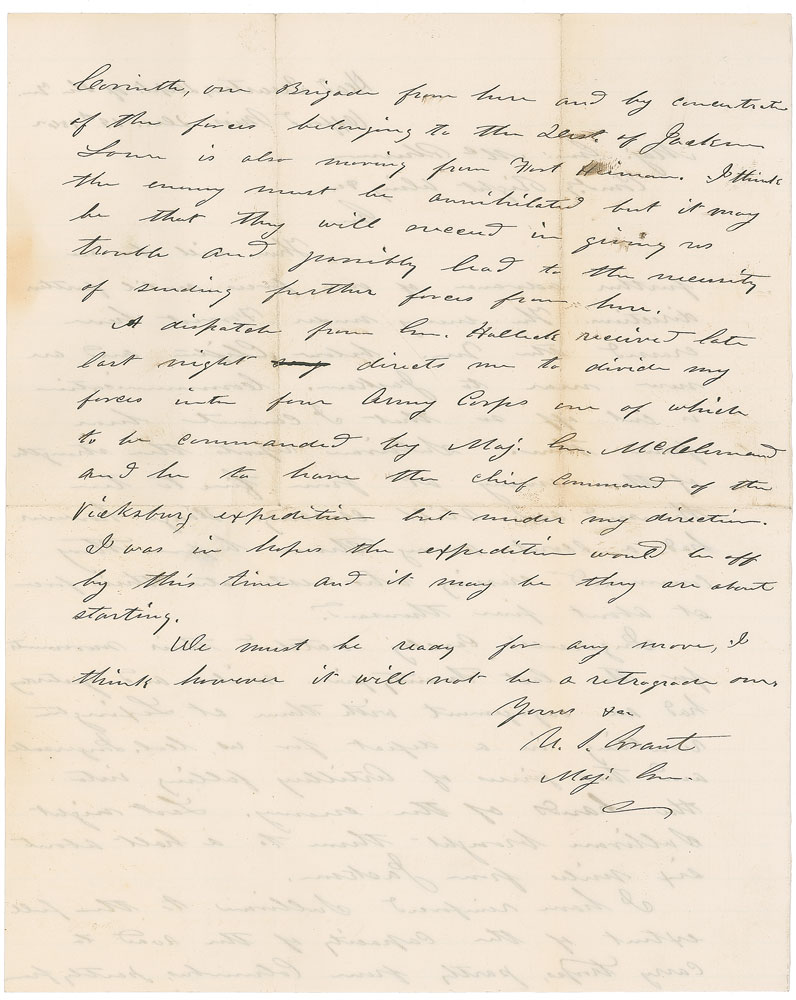 “The enemy under Forrest have crossed the Ten. below Clifton,” writes Grant in a tactical letter to McPherson as "the Vicksburg expedition” commences in 1862

Superlative Civil War–dated ALS signed “U. S. Grant, Maj: Gen.,” one page both sides, 8 x 10, December 19, 1862. Letter to Major General James McPherson. In full: “There will be no farther advance of our forces until further directions. The enemy under Forrest have crossed the Ten. below Clifton, and are now near to Jackson. Communication is cut off so that I cannot hear from there. Sullivan reports the strength of the enemy at from five to ten thousand and still crossing. Dodge however had a scout among them before they commenced crossing who estimates their force at about five thousand.

Ingersoll’s Cavalry watched their movements for the last twenty five miles, and yesterday had an engagement with them at Lexington, resulting in a defeat for us, Col. Ingersoll and two pieces of Artillery falling into the hands of the enemy. Last night Sullivan brought them to a halt about six miles from Jackson.

I have reinforced Sullivan to the full extent of the capacity of the road to carry troops partly from Columbus, partly from Corinth, one Brigade from here and by concentrating of the forces of the District of Jackson. Lowe is also moving from Heiman. I think the enemy must be annihilated, but it may trouble and possibly lead to the necessity of sending further forces from here.

A dispatch from Gen. Halleck received late last night, directs me to divide my forces into four Army Corps one of which to be commanded by Maj Genl. McClernand, and he to have the chief command of the Vicksburg expedition, but under my direction. I was in hopes the expedition would be off by this time and it may be that they are about starting. We must be ready for any move, I think however it will not be a retrograde one.” In fine condition, with intersecting folds (one vertical fold passing through a single letter of the signature), scattered soiling, and a bit of brushing to ink.

This remarkable letter comes from the beginning of the important Vicksburg Campaign in which Grant hoped to cripple the Confederate Army by taking its key fortress on the Mississippi River; Jefferson Davis observed its strategic importance, saying, ‘Vicksburg is the nail head that holds the South's two halves together.’ In planning the attack, Grant’s forces were reorganized into four corps. In addition to McClernand, the other commanders were Sherman, Hurlbut, and McPherson himself. Grant planned a two-pronged attack to begin the day after this letter, with Sherman’s forces advancing down the Mississippi River to Chickasaw Bayou while Grant advanced overland with reinforcements. However, Sherman’s forces—despite outnumbering the rebels two-to-one—were repulsed by John C. Pemberton as they approached. Meanwhile, Grant’s troops were being defeated in their overland campaign. As foreshadowed in this letter, Nathan Bedford Forrest’s efforts in cutting off his lines of communication, coupled with Earl Van Dorn’s capture of the Union’s chief supply depot at Holly Springs, proved too much to take and Grant had to abandon his expedition south. Despite this embarrassing failure, the stubborn Grant was determined to take Vicksburg and revised his tactics, continuing his operations until finally taking the city in the summer of 1863. Pre-certified PSA/DNA.