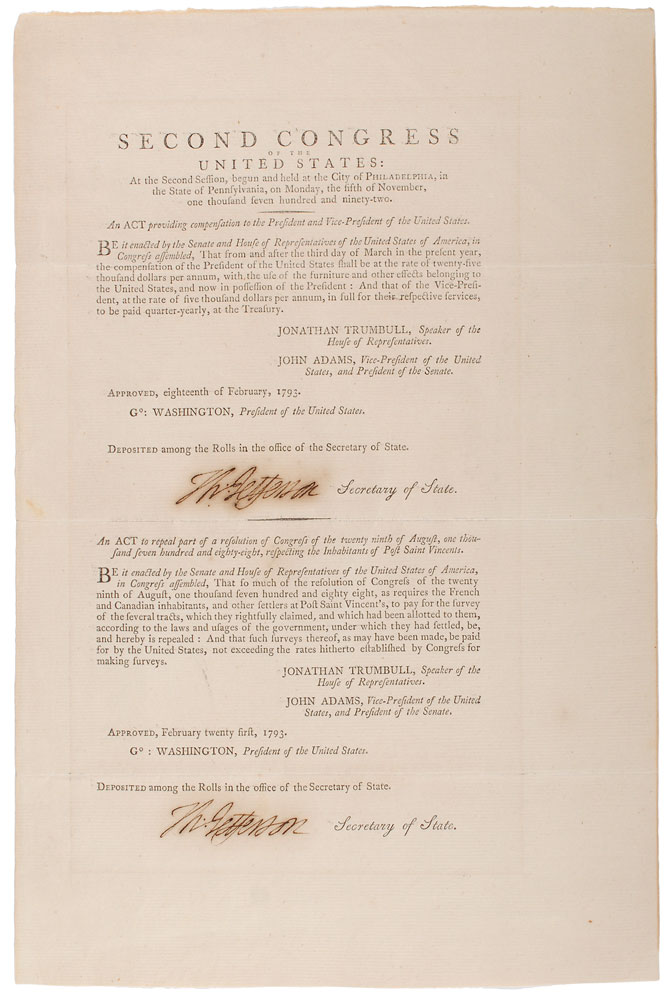 Printed DS, signed twice, “Th: Jefferson,” one page, 9.5 x 14.25, February 1793. Congressional broadside publishing two acts passed by the Second Congress of the United States. The first, entitled “An Act providing compensation to the President and Vice-President of the United States,” approved by President Washington on February 18, 1793, states that “the compensation of the President of the United States shall be at the rate of twenty-five thousand dollars per annum…And that of the Vice-President, at the rate of five thousand dollars.” The second, an act to repeal a 1788 resolution “respecting the Inhabitants of Post Saint Vincents,” approved by President Washington on February 21, 1793, concerns payment for land surveys conducted by “the French and Canadian inhabitants, and other settlers at Post Saint Vincent’s.” Each of these acts is signed at the conclusion by Secretary of State Thomas Jefferson to confirm they were “Deposited among the Rolls in the office of the Secretary of State.” In fine condition, with expected document wear and some haloing to ink.

In addition to its rarity as a well-preserved document boasting a pair of prominent Jefferson signatures, this already extraordinary piece presents a remarkable connection to the founding of the United States of America. The act concerning compensation is directly associated with Article II of the Constitution, which establishes and defines the offices of president and vice president. The first section of this article outlines what are arguably the most defining elements of the presidency—terms of four years, the electoral college system, age and citizenship prerequisites, order of succession, and the oath of office. Just prior to offering the text for the oath, Article II states: ‘The President shall, at stated times, receive for his services, a compensation, which shall neither be increased nor diminished during the period for which he shall have been elected.’ On September 24, 1789, the First Congress set the yearly salaries for the president of the United States at $25,000 and for the vice president at $5,000. With George Washington and John Adams ready to begin their second terms in these offices on March 4, 1793, Congress passed the present act to approve their salaries at the same rate. A museum-quality document offering an excellent association between three founding fathers—all of whom served as president—and the fundamental document of American governance. Pre-certified PSA/DNA.