Rare 1965 letter from the boys to their US tour biographer 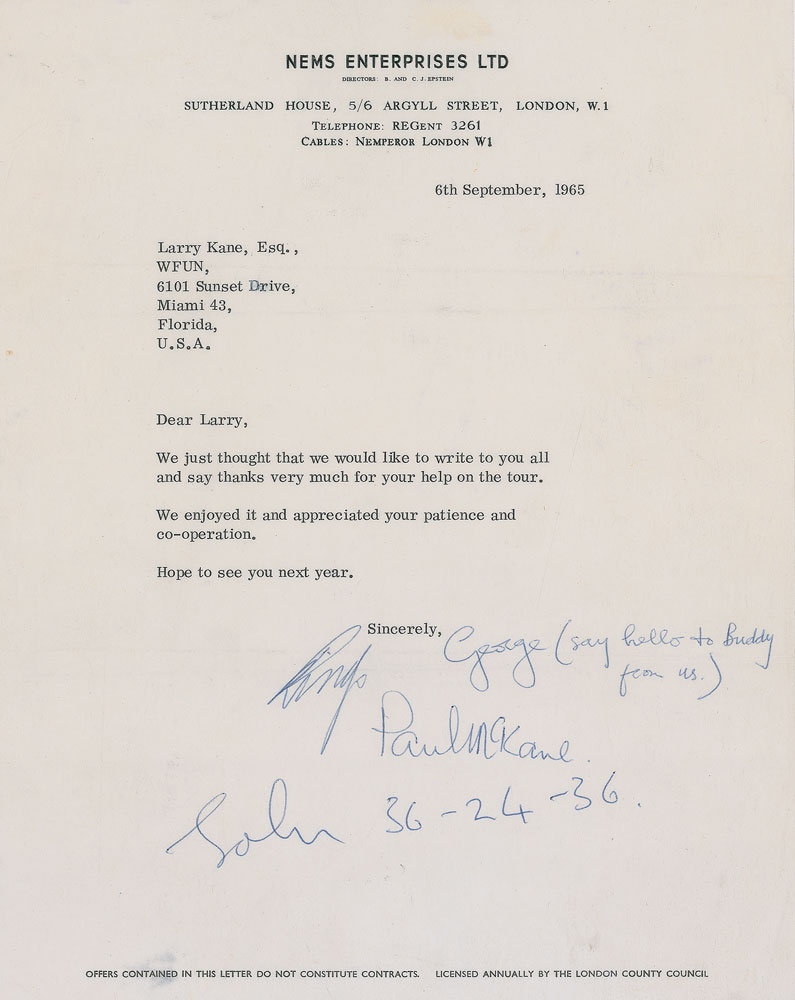 Rare 1965 letter from the boys to their US tour biographer

TLS signed by all four, one onionskin page, 8 x 10, NEMS Enterprises letterhead, September 6, 1965. Letter to WFUN Miami disc jockey Larry Kane. In full: “We just thought that we would write to you all and say thanks very much for your help on the tour. We enjoyed it and appreciated your patience and co-operation. Hope to see you next year.” Signed at the conclusion in blue ballpoint by John Lennon, “John 36-24-36,” Paul McCartney, “Paul McKane,” George Harrison, “George (say hello to Buddy for us),” and Ringo Starr, “Ringo.” In fine condition, with light mailing folds passing through Harrison and Starr, and a soft diagonal vertical crease passing though the text but not affecting the signatures. Accompanied by a certificate of authenticity from Tracks, as well as a letter of provenance from Kane, in part: “I was 21 and a friendship based on journalistic fairness from the beginning, forged a genuine bond...Prior to 1965, through their appearance at Shea Stadium, and with Ed Sullivan Productions, they invited me to do all the pre-and post audio interviews used on the movie ‘The Beatles At Shea Stadium,’ a documentary...I received the letter 5 days after the end of the of the 65 tour. With the exception of Ringo, there are all personalized references.”

Kane got to know the band quite well as the only broadcast journalist to travel to every stop on the Beatles’ 1964 and 1965 tours, and has since authored several books on the band. This friendship is evident in the present letter—they are on a first name basis, and McCartney playfully adopts Kane’s surname when signing. Harrison’s parenthetical refers to Sgt. Buddy Dresner of the Miami Police Department who was assigned to guard the Beatles when they visited Miami in February 1964. It was here that they made their second television appearance on The Ed Sullivan Show, with a February 16, 1964, performance broadcast live from the Deauville Hotel in Miami Beach. A superlative fully signed letter to the foremost witness of Beatlemania. Pre-certified REAL.