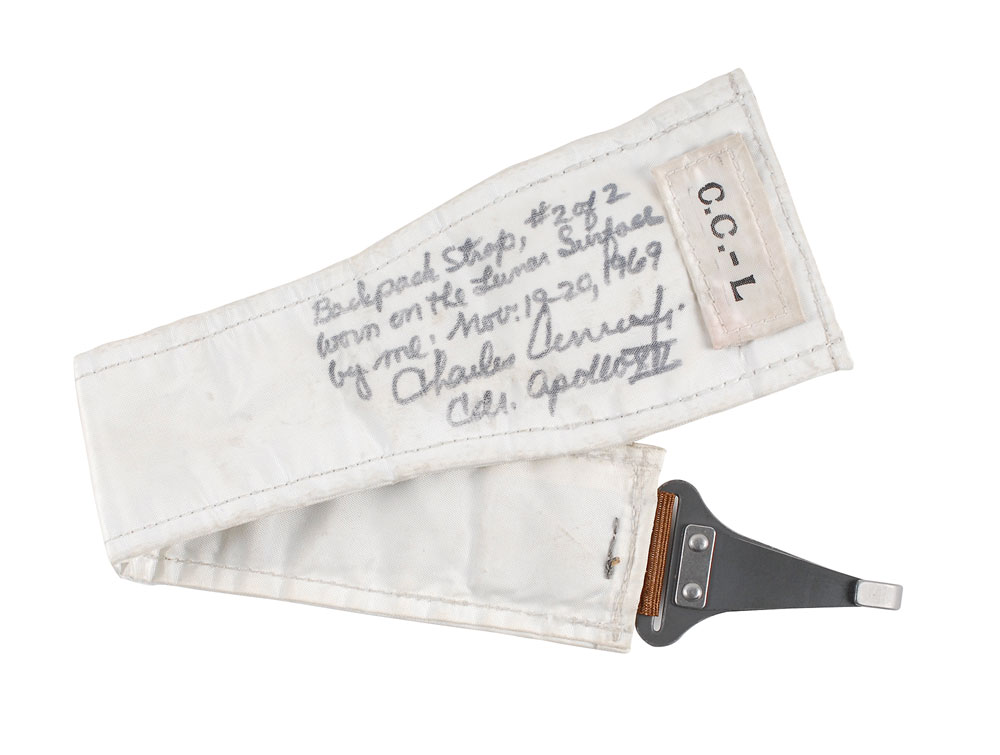 Amazing and incredibly rare backpack strap from Conrad’s Personal Life Support System (PLSS), used on the lunar surface during both of his moonwalks on the Apollo 12 mission, signed and certified on the front in black felt tip, “Backpack strap, #2 of 2, worn on the lunar surface by me; Nov. 19–20, 1969. Charles Conrad, Jr., Cdr. Apollo XII.” Strap measures 16″ in overall length, with a metal clip to lower end numbered "B ISIS V723617-2, S/N 168." A similar clasp is contained within a pocket at the opposing end of the strap. A label sewn to this end of the strap reads “C.C.—L [Charles Conrad—Left].” In fine condition, with expected light wear and soiling from use. Also includes a satin-finish 14 x 11 photo of Conrad next to the American flag during his EVA, signed in silver ink, "Backpack strap S/N #168 on 'The Ocean of Storms, Moon!' Charles Conrad, Jr., Cdr. Apollo XII," drawing an arrow to the location of the strap on his spacesuit.

Accompanied by a signed letter of authenticity from Conrad, in part: “I certify that the accompanying Backpack Strap, identified by NASA Part Number B ISIS V 723617-20 [sic, D], Serial Number 168…bearing the stenciled letters C.C.—L…was worn during both my moonwalks on the Ocean of Storms, Moon, on November 19–20, 1969…This strap helped support the 'PLSS' Backpack on my spacesuit during my historic four-hour moonwalks, becoming directly exposed to the lunar environment as a result! These straps were individually fitted to each astronaut, and designed for one-time use only due to their customization, for later discard with our backpacks on the Moon. We were allowed to keep, and return, a few personal mementos from the Moon as keepsakes, and I included these disposable straps among mine. After this strap’s release from quarantine, and return to me by NASA, it remained a treasured part of my personal space collection until 1992…Today, it remains among the largest, and finest, fully-documented tools in private hands ever used by Man on the surface of another world!” A photo of Conrad with the strap and letter is affixed to the lower right. Conrad became just the third human to step onto the lunar surface when he began his first moonwalk accompanied by his fellow astronaut Alan Bean. They conducted two EVAs while on the moon, each almost four hours long, during which they collected lunar samples, inspected the Surveyor 3 probe, and deployed the ALSEP, among other experiments and activities. As a vital piece of Conrad's spacesuit that helped carry the life support system during his nearly eight hours of exploring the lunar surface, this is a truly remarkable piece. Any artifact from an Apollo EVA is incredibly scarce, highly sought after by collectors, and represents the pinnacle of space collecting. Pre-certified Zarelli Space Authentication.