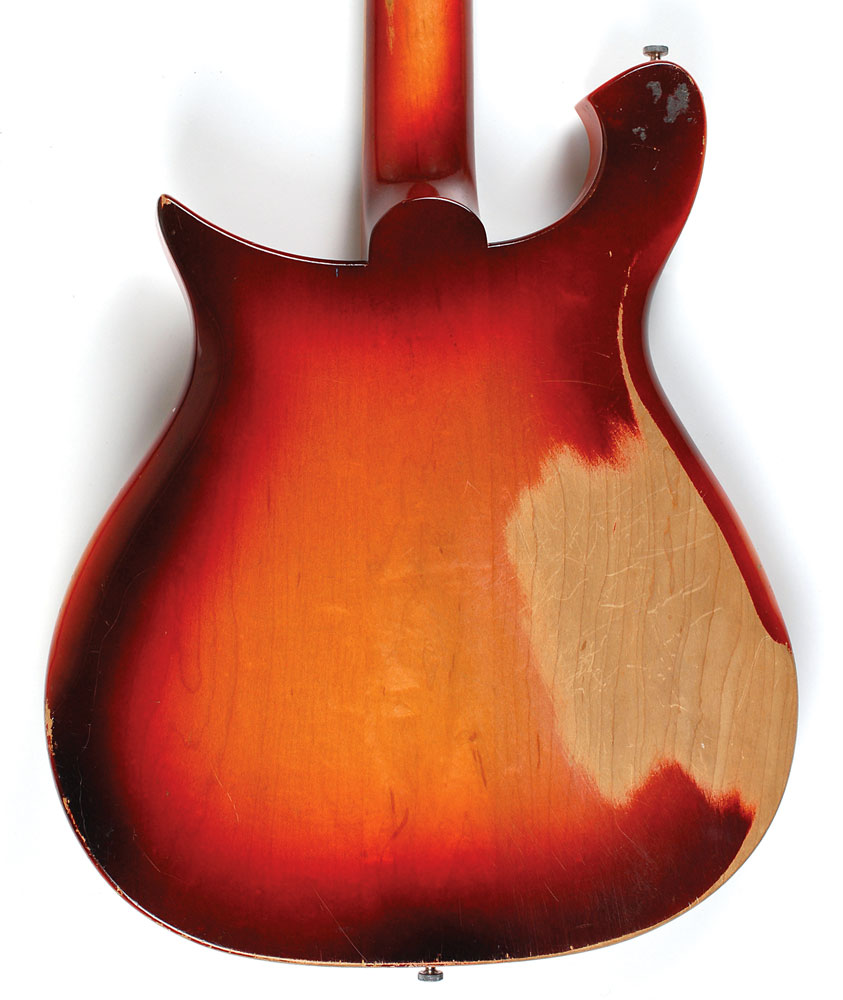 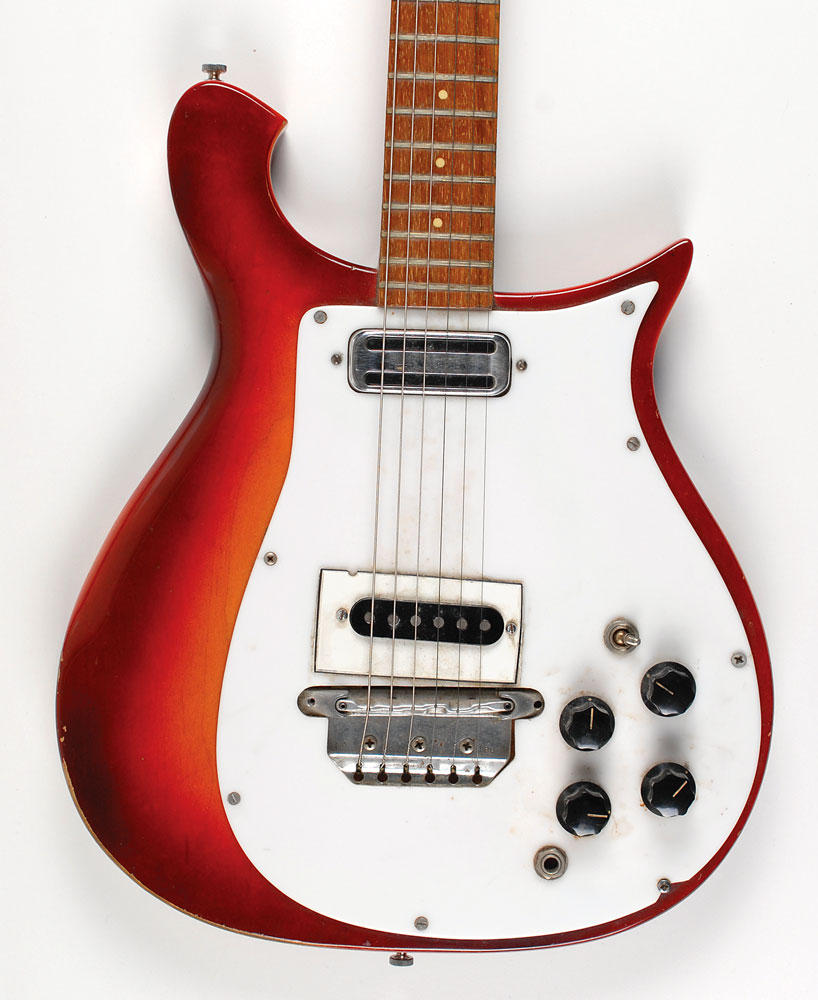 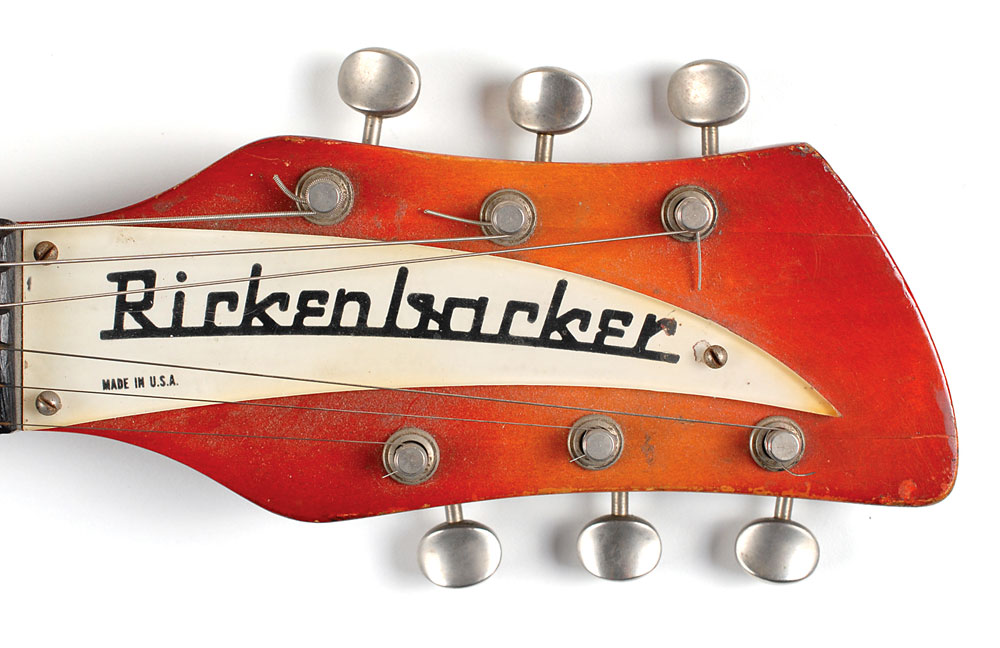 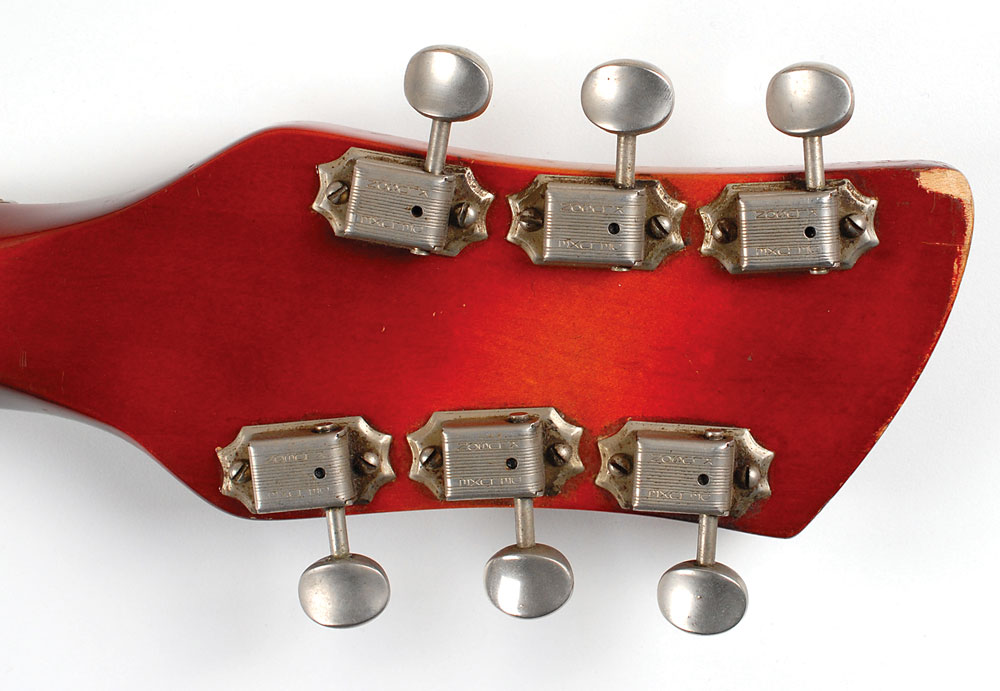 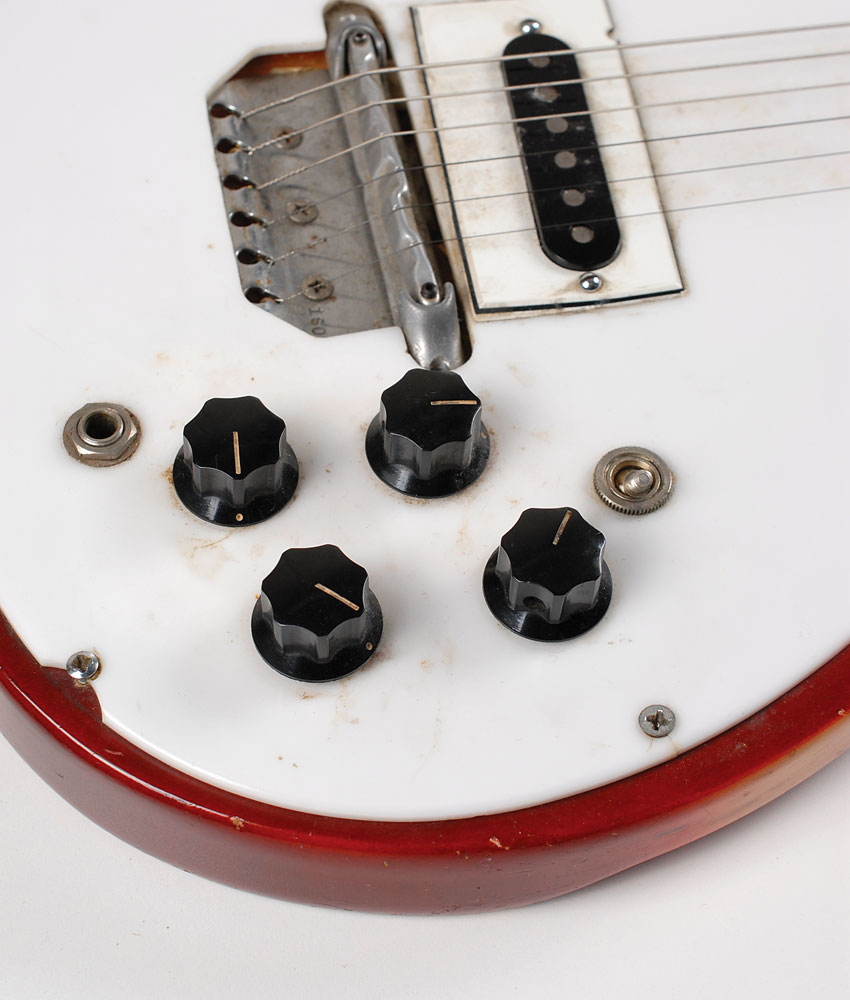 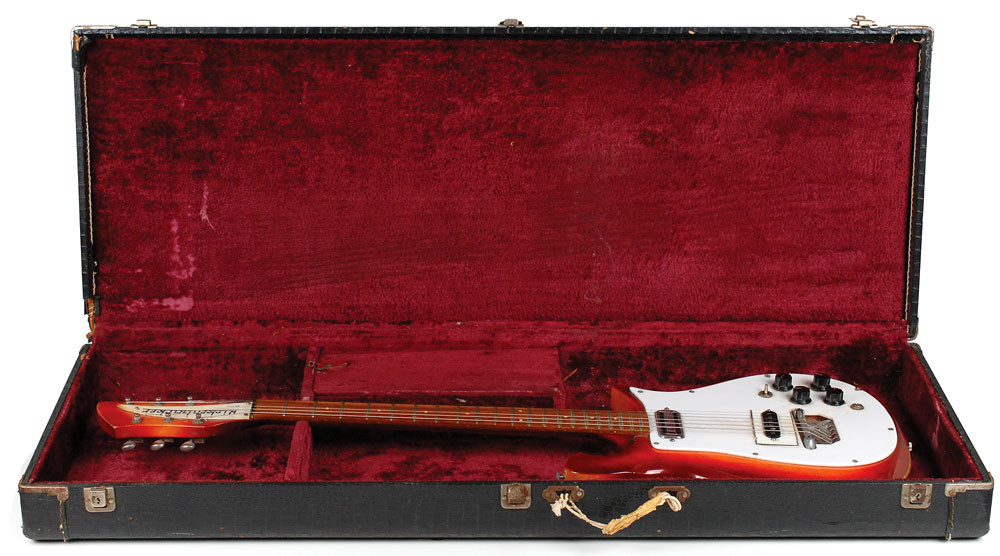 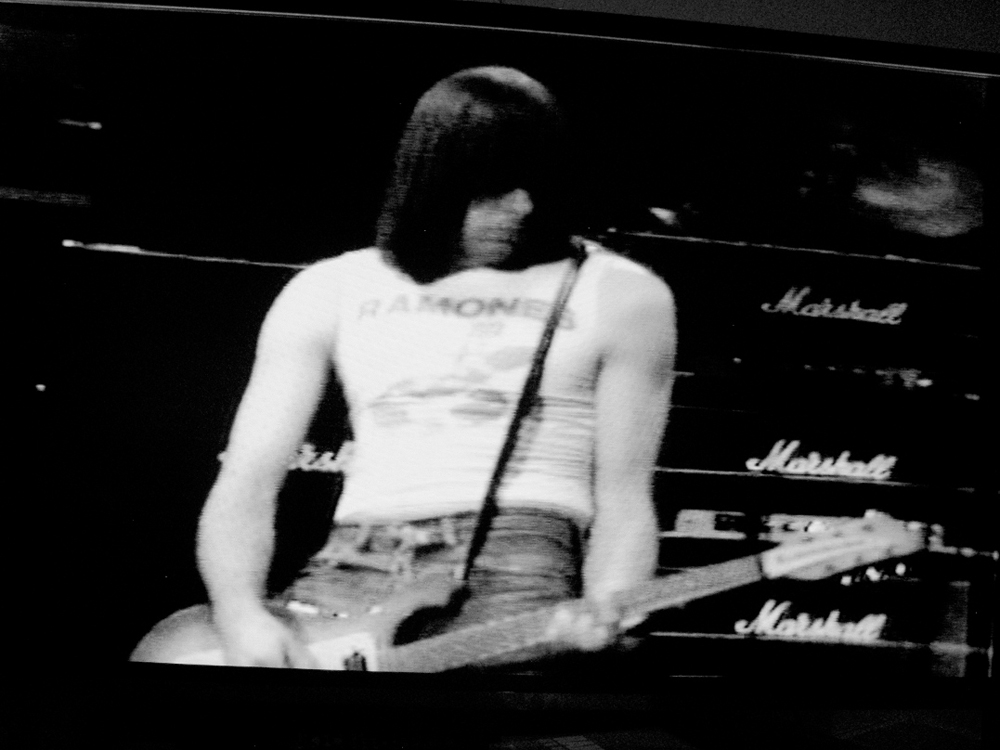 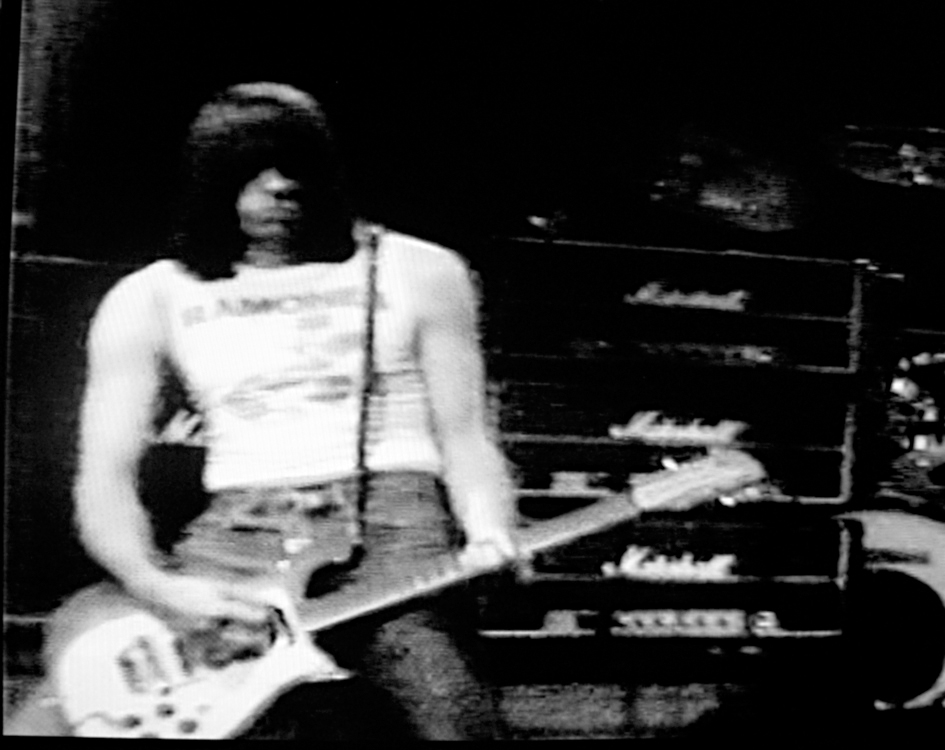 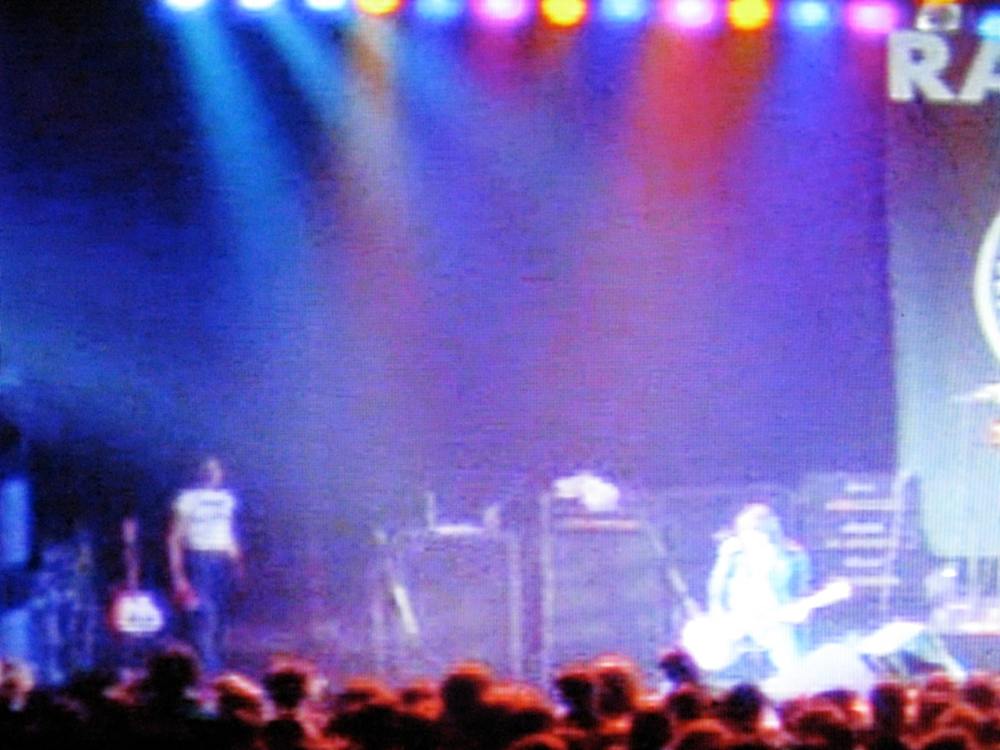 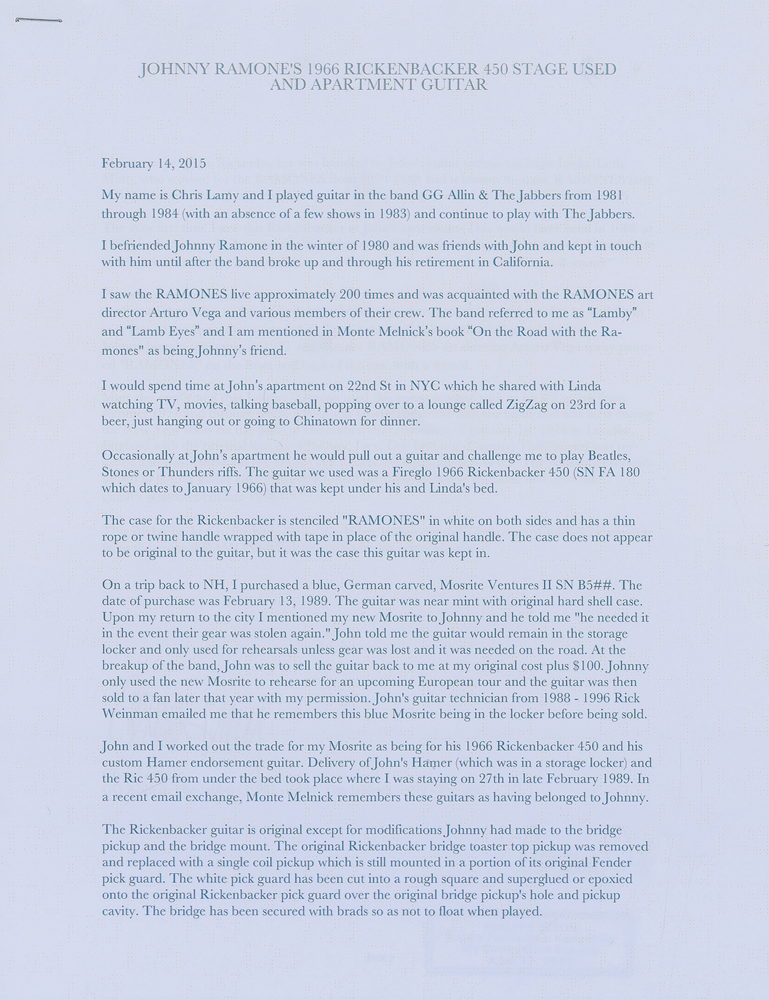 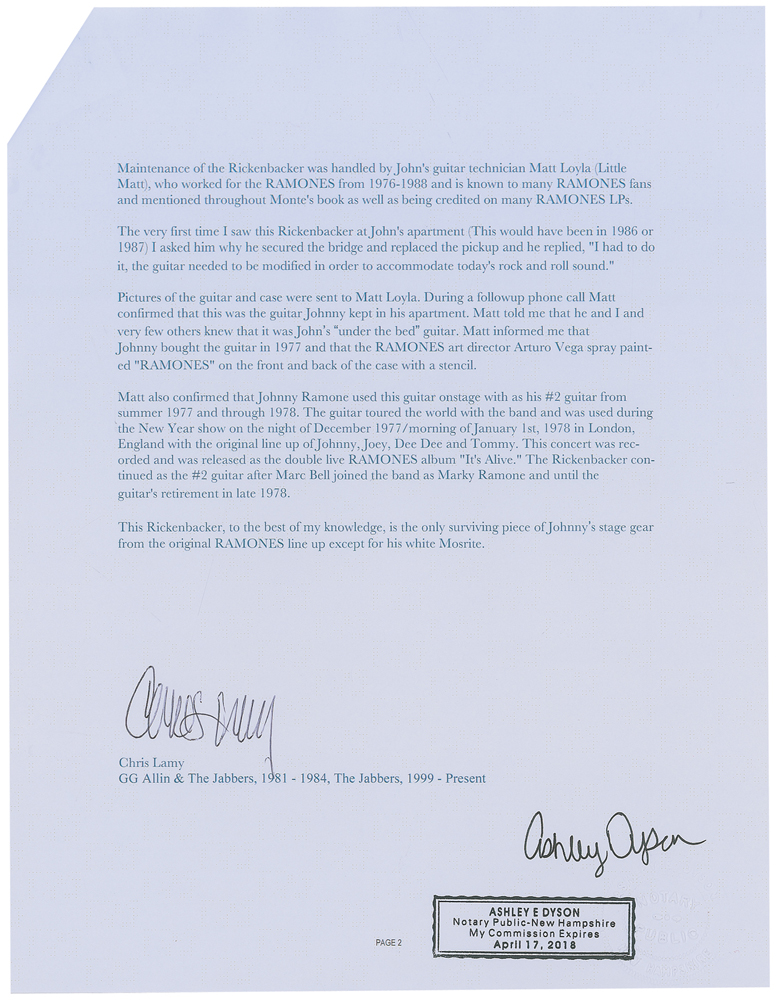 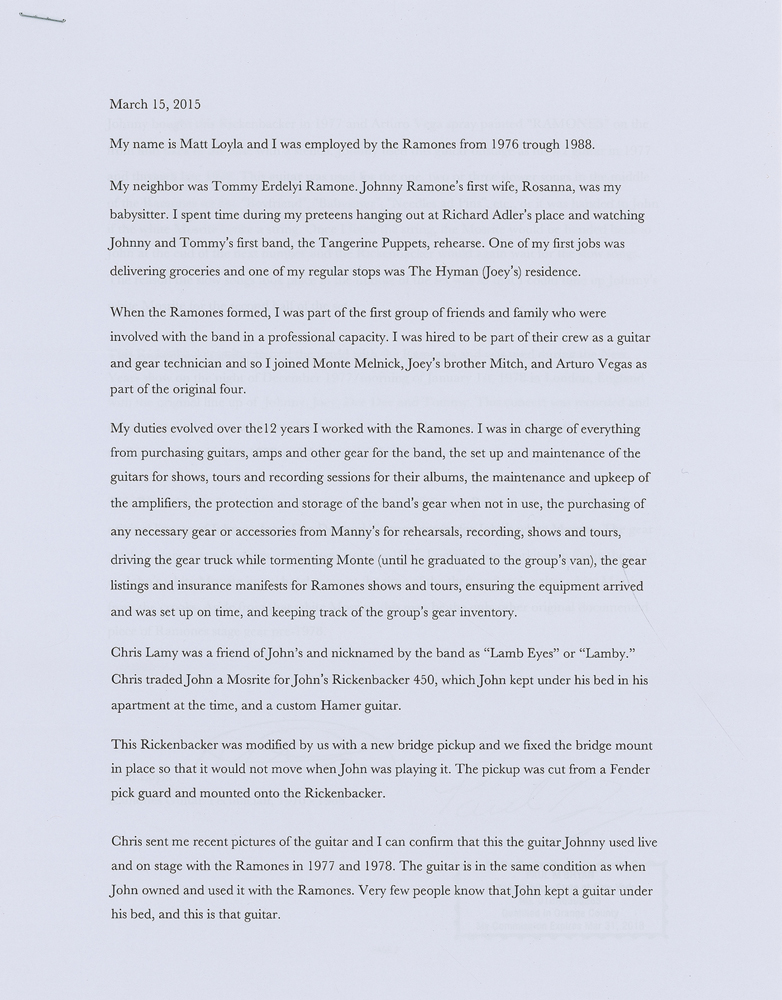 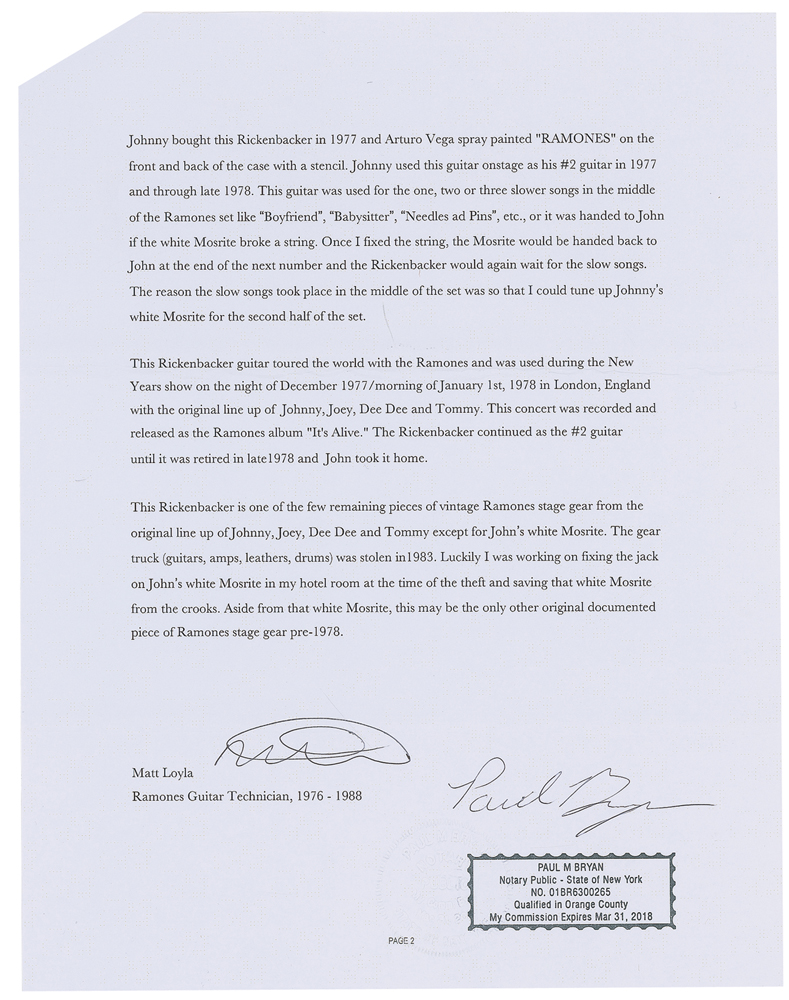 Johnny Ramone’s personally-owned and -used 1966 Rickenbacker 450 ‘Fireglo’ finish guitar frequently used on stage and adjusted to his personal preferences, including a replaced higher output pickup to accommodate the Ramones’ new punk rock sound. The bridge is stamped with the serial number FA180, and secured with small brads in order to keep it in place due to Johnny’s aggressive playing style. The guitar features its original Kluson Deluxe tuners. The guitar exhibits extensive wear from use, including dings and wear to the finish, and a large area of buckle rash to the back. Includes Ramone’s original hard case for the guitar, stenciled “Ramones” on both sides by famous Ramones art director Arturo Vega. Oversized. Accompanied by letters of provenance from longtime Ramones tour manager Monte A. Melnick, Johnny Ramone’s guitar technician Matt Loyla, Ramones crew member and tour assistant Warren Cohen, Ramones photographer and gear expert Ian Harper and Chris Lamy, close friend of The Ramones and guitarist of The Jabbers, formerly GG Allin & The Jabbers.

Cognizant of the way rock bands were embracing a more modernized sound, Ramone removed this guitar’s original Rickenbacker bridge pickup and replaced it with a more advanced Stratocaster version. Johnny displayed the modified guitar’s fuller, louder tone on stages across the world, and rather than house it in the band's storage facility, this Rickenbacker was stored safely under both Johnny's 10th Street and then later his 22nd Street apartment beds when the band was in between tours and after the guitar's retirement. Johnny Ramone loved the Beatles and this Rickenbacker was his apartment guitar. Additionally, its retirement before a major 1983 tour theft affirms that this guitar was used throughout the late ‘70s and early ‘80s, and is a CBGB’s-era piece of Ramones gear viewable during performances on the DVD, ‘Ramones It's Alive 1974-1996.’ This guitar is the second-oldest documented guitar of Johnny’s, all earlier guitars having been stolen in 1977 (aside from Johnny’s famous white Mosrite, which was purchased in 1977 as was this guitar). In accordance with Rickenbacker factory logs, only sixty-four of these model-450 guitars were produced in this finish, making the instrument collectible in its own right. While not original to the Rickenbacker guitar, the accompanying tour-used carrying case prominently stenciled on the front and back by the Ramones’ trusted art director Arturo Vega is indicative of the earliest era of Ramones gear, as the band soon acquired rolling cases for gear protection. The Chris Lamy Collection.