Remarkable archive chronicling Lansky’s desire to return to Israel: “My second land is Israel, I would love to visit my friends again next year in Jerusalem” 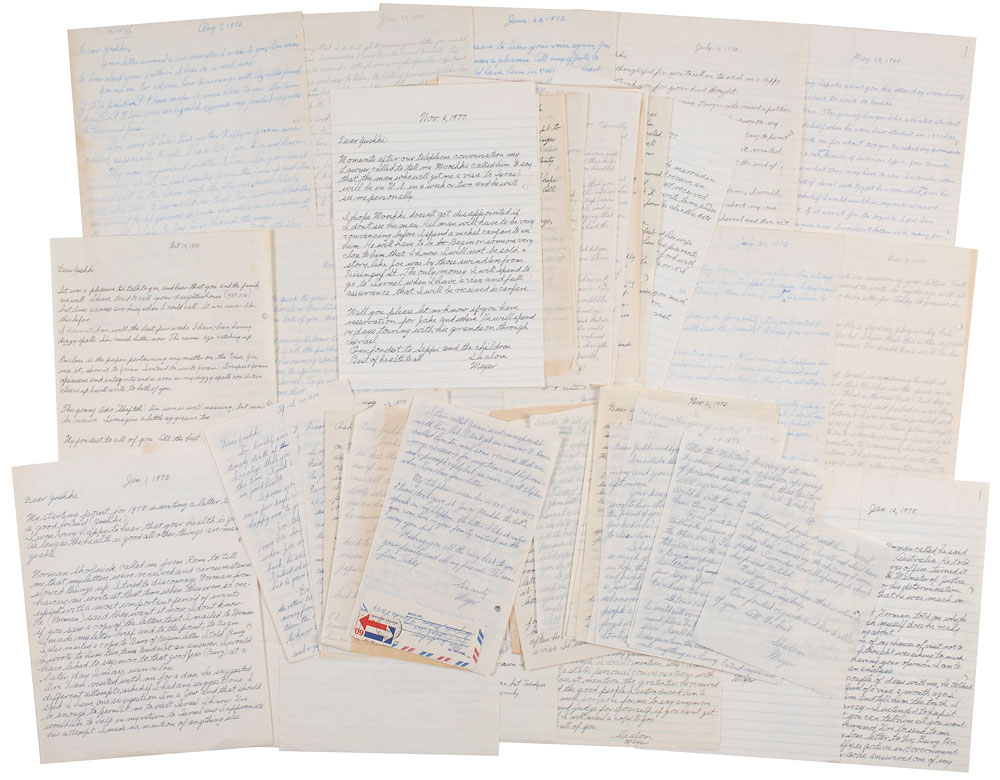 Remarkable archive chronicling Lansky’s desire to return to Israel: “My second land is Israel, I would love to visit my friends again next year in Jerusalem”

Amazing archive of 47 ALSs signed "Meyer," totaling 82 pages, dated between 1972 and 1981. All are to Joseph Sheiner, a member of the Israeli Security Agency who had accompanied Lansky on his infamous flight from Israel to seek asylum elsewhere rather than face charges in the US. Lansky's letters to his Israeli confidante, who he addresses by his Hebrew first name, Yoskeh, span the final chapter of the mobster's storied career—from his return to Miami in November 1972 to a year before his death in 1982. The letters reveal not only a cagey businessman who displayed keen insight into people's strengths and weaknesses, unafraid to angrily lash out at those who would cross him, but also a man with deep compassion and love for his family, friends, and the State of Israel.

The first letter comes from only weeks after Lansky's return to Miami following his attempts to obtain Israeli citizenship under the nation's law of return. After several years of wrangling, Israel demanded that he leave the country. Lansky, with Sheiner as his traveling companion, first flew to Switzerland where he was promptly denied entry. They then flew to South America, offering $1,000,000 to any nation who would grant him asylum. Paraguay, Bolivia, Argentina, Brazil and Panama all rejected his offer. Lansky landed in Miami on November 7 and was promptly arrested. Within nine hours, he was free on bail. Recalling the intense media and police attention he received on his arrival at Miami International Airport, he writes on November 21, "I'm interested to know how you were treated back home after your eventful trip. My arrival brought out the band. I wonder if any police were left to guard the President?… What concerns me most now is you! How you will be treated for taking on this assignment from my lawyer to travel with me?"

The proceedings underway, Lansky provides updates throughout 1973. In August, he reports on his trial for tax evasion: "My most important matter I won…I just wanted to win this frame up and I'm sure it will be same with the other one, most likely without a trial. They well k[n]ow that I'm innocent but they are afraid to let go now because it would be an admission of her guilt. I have to pay for it through the nose. I heard that my victory got very little attention in your press, my loss received much more attention."

Despite his rejection by Israel, Lansky still wanted to assist the Jewish State. On December 20, 1972 he commented, "I was much disheartened when I read the article in our newspapers about the $10000 reward for the Eichman[n] case. I wish I would have known about it I would raise the money myself." His emotional reaction to the Yom-Kippur War, written on August 20, 1973: "Say what you may and blame whomever you want—you are a great people a heroic people. The World will never forget when History is written the Military Strategy this little Army has shown. Also the Military bravery of its men. We saw a picture on television of a group of prisoners with a Torah; that picture will never leave my mind." Invoking his own expertise in banking, Lansky discusses revelations on a scandal in the Israeli Finance Ministry in December 1973: "I was terribly saddened of Israel encumbering herself at this time. As I understand this Banker in the past made a lot of money for Israel. What is the real truth? Did they or (he the Banker) try to do well for Israel and failed or was there just a personal gain interest. I was never impressed with the financial planners of Israel…I saw a lot of faults; I wasn't in a position to comment, I would have been easily misunderstood. What occurred with the greatness of Israel occurred with other nations in the past. After you people gave your sweat and blood in came the material, monetary geniuses. Influenced your leaders with business thoughts they in return not wittingly lulled the people to sleep with better times around the corner. The result of the Yom-Kippur debacle. No doubt the suffering is great in Israel. I can see what is going on here, how much worse it is for you people. This worries me for the Jews future."

Following the end of Lansky's legal troubles at the end of 1974, he renewed his efforts to settle in Israel. Reflecting on a suggestion that winning popular support could sway the Israeli government, Lansky writes: "I'm anxious to visit Israel but not on the strength of publicity. Publicity will not help my return. I also don't have a desire to create any friction in Israel. Israel has enough problems without me. I also don't intend to beg for permission to visit Israel. Regardless of what may be the outcome my second land is Israel, I would love to visit my friends again next year in Jerusalem." As he approached the end of his life and Israel finally granted a visa, it came with a condition that he post a bond of over $100,000 during his stay. Furious at this requirement set forth by Interior Affairs Minister Yosef Burg, Lansky lashes out on November 15, 1980: "I will not visit Israel under conditions. The only condition I would accept is: police protection from Burg's criminal mob. Fuck Burg and his restrictions. My well meaning lawyer can be naive, but I am not. Time is running out for my desire to make trips both physically and financially." By 1981 he was resigned in his cause: "My days of seeking to visit Israel are over, health is not on our side." Indeed, Lansky never returned.

In overall fine condition. While the media often portrayed Lansky's bid for Israeli citizenship a simple ploy to escape justice, the correspondence reveals that he in fact had a deep love and admiration for the nation and its people. In all, this archive presents a nuanced and detailed portrait of a man who was so often portrayed so one-dimensionally in the press, allowing the reader a deeper understanding of this man.