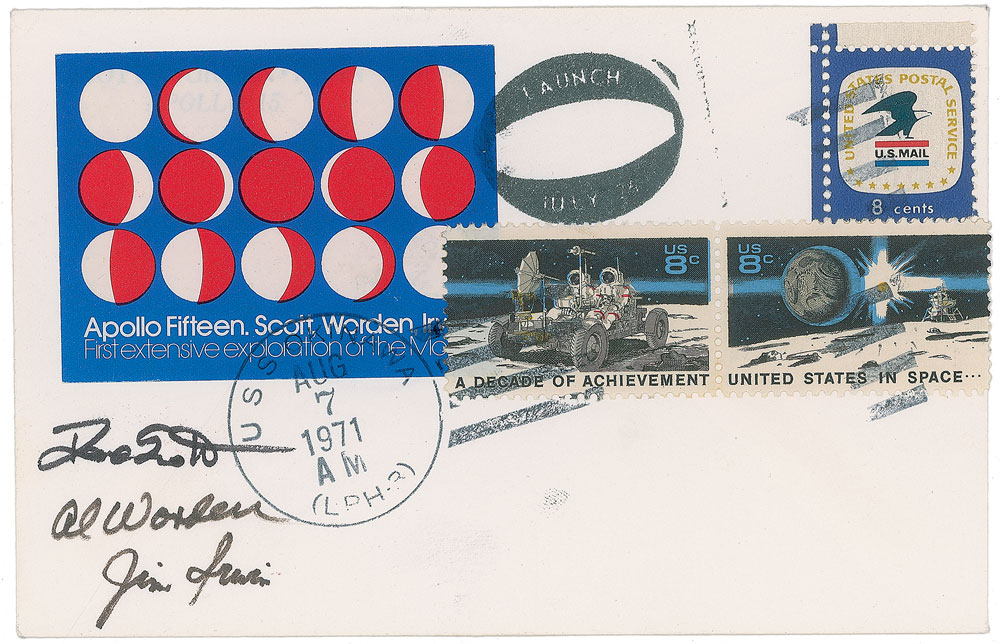 Flown ‘Phases of the Moon’ postal cover, carried into lunar orbit during the Apollo 15 mission. Cover has an affixed color cachet which shows all 15 phases of the moon, has an August 7, 1971, USS Okinawa postal cancellation, and is signed in the lower left in black felt tip by Dave Scott, Al Worden, and Jim Irwin. Cover is also numbered under the flap, “345,” and initialed by NASA’s general counsel S. Neil Hosenball. In fine condition. One hundred and forty-four of these covers, created by German stamp dealer F. Herrick, were carried in Al Worden’s PPK kit on board the Endeavour during the mission.

Accompanied by a one-page typed notarized certification, signed “Alfred M. Worden,” “David R. Scott,” and “James B. Irwin.” The provenance reads in part: “Postal covers were carried aboard the Apollo 15 Mission, which postal covers were stamped and postmarked at Kennedy Space Center, Florida, on the date of the launch, July 26, 1971, and carried aboard the Apollo 15 Spacecraft during the entire term of the Mission, to include orbit on the moon and were returned to the Earth at the termination of the Mission on August 7, 1971…The postal covers were in the possession of one or more of the undersigned until 1972, at which time they were deposited with the United States Government…The undersigned have this date inspected that Postal Cover bearing NASA Serial No. 345, and aver, affirm and certify that said Postal Cover is a cover which was carried aboard the United States Lunar Mission—Apollo 15.” Also accompanied by a 2012 letter of authenticity from Al Worden, which reads, in part: “The postal cover numbered 345…was flown aboard the Command and Service Module ‘Endeavour’ during the flight of Apollo 15. It was designed and produced by Mr. Herrick and placed on my flight manifest list prior to launch…The ‘Moon Phase Covers’ were not postmarked at Kennedy Space Center before flight because they were stored aboard the spacecraft as part of my Personal Preference Kit (PPK). The accompanying certification is not correct in that regard. They were, however, postmarked after recovery while on board the USS Okinawa.” These unique covers are quite controversial regarding how many were actually produced, believed by many experts to be more than originally indicated. Though a number of similar, purportedly flown covers have come up for sale over the years, the rare notarized certification present with this example is a must for providing rock solid proof of its authenticity. Pre-certified Steve Zarelli.