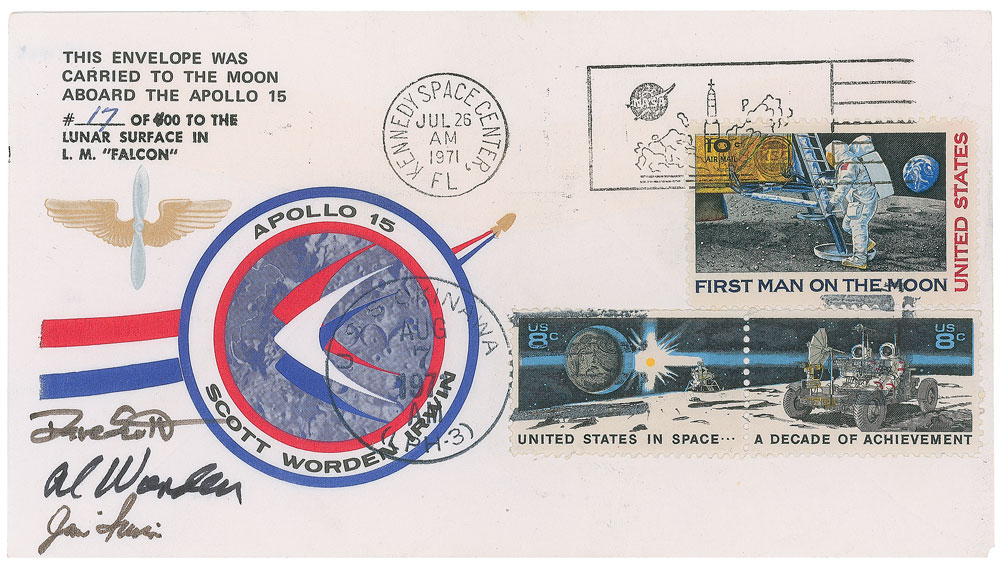 Uncommon Apollo 15 postal cover, 6.5 x 3.75, numbered 17 of 400, carried to the lunar surface aboard the Falcon, signed in the lower left corner by crew members Dave Scott, Al Worden, and Jim Irwin. In fine condition. Includes a one-page typed notarized certification, signed “Alfred M. Worden,” “David R. Scott,” and “James B. Irwin.” The provenance reads, in part: “Postal covers were carried aboard the Apollo 15 Mission, which postal covers were stamped and postmarked at Kennedy Space Center, Florida, on the date of the launch, July 26, 1971, and carried aboard the Apollo 15 Spacecraft during the entire term of the Mission, to include landing on the moon and were returned to the Earth at the termination of the Mission on August 7, 1971…The postal covers were in the possession of one or more of the undersigned until 1972, at which time they were deposited with the United States Government…The undersigned have this date inspected Postal Cover No. 17, bearing NASA Serial No. 084, and aver, affirm and certify that said Postal Cover is a cover which was carried aboard the United States Lunar Mission—Apollo 15.” All three crew members have also added their initials to a small correction in the text. Also accompanied by a letter of provenance from Jim Irwin's widow, Mary Ellen Irwin. Pre-certified Steve Zarelli.