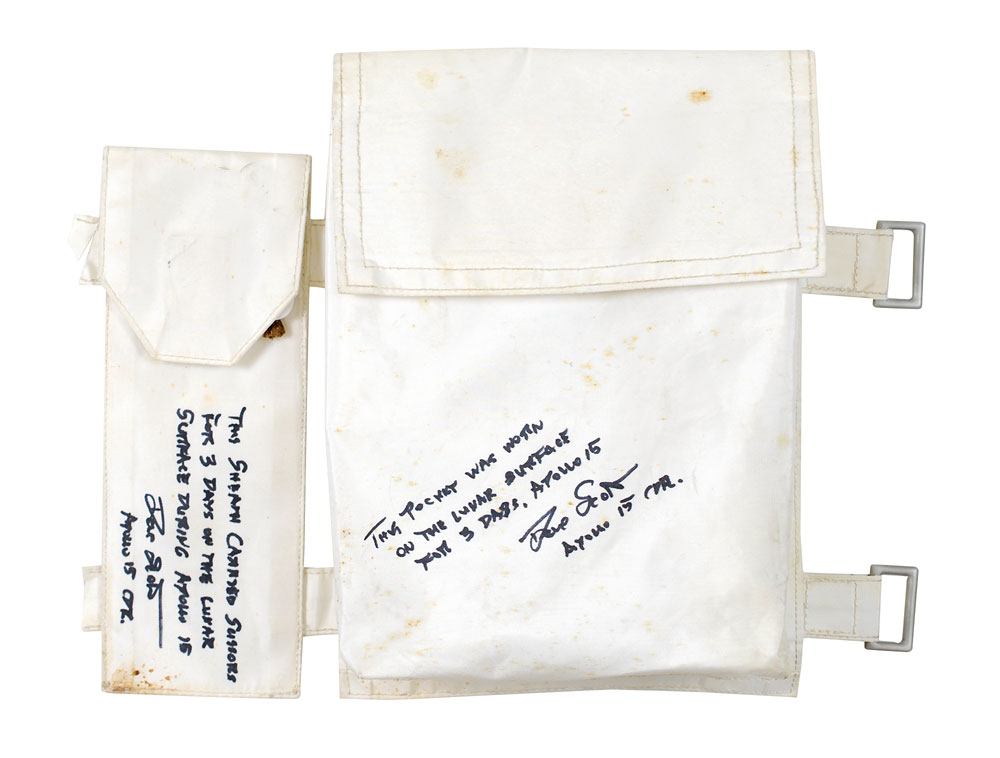 Flown beta cloth pocket and scissors sheath carried on the Apollo 15 mission by Commander Dave Scott and present in the lunar module for 3 days, the pocket measuring 7.5 x 10.25 and sheath measuring 3 x 8.25, attached together with two sewn-on beta straps. Both are signed and certified on the front in black felt tip by Scott, the pocket reading, “This pocket was worn on the lunar surface for 3 days, Apollo 15. Dave Scott, Apollo 15 CDR,” and the sheath reading, “This sheath carried scissors for 3 days on the lunar surface during Apollo 15. Dave Scott, Apollo 15 CDR.” Each pouch bears an identification patch on the reverse, the pocket identified as “Part No. A7LB-201155-01, S/N 320, Code Ident. 74897,” and the sheath identified as “Part No. A7LB-201175-01, S/N 320, Code Ident. 74897.” In very good condition, with moderate overall foxing and soiling.

Accompanied by a signed letter of provenance from Scott, in part: “I hereby certify that the Apollo 15 Beta-cloth Checklist and Scissors Pocket Assembly is from my personal collection and was used during the first extended scientific exploration of the Moon, at the Hadley Apennine region, July 26–August 7, 1971. This Beta cloth assembly has two pockets. One, made to hold scissors…The other, made to hold a checklist…The assembly was strapped to the leg of my spacesuit during launch and reentry as well as during the lunar landing, and it was available in the Lunar Module during our three days on the moon. It was also available for EVA activities in the event the scissors could be used.

This assembly was of particular importance during our return from the Moon to the Earth. During this period the crew performed the first interstellar EVA when the Command Module Pilot (Al Worden) retrieved three large film cassettes from Endeavor’s SIM-Bay…both the Commander and the Lunar Module Pilot were standing by in the depressurized Command Module to retrieve the cassettes as well as to assist the CMP during his ingress into the spacecraft. Should a strap or hook become entangled during this maneuver, the scissors would be used to cut or release the entanglement.” As a rare piece present in the Lunar Module during Apollo 15’s three days on the moon and an item essential to the practicality of the iconic A7LB spacesuit, this is an absolutely remarkable piece. Pre-certified Zarelli Space Authentication.