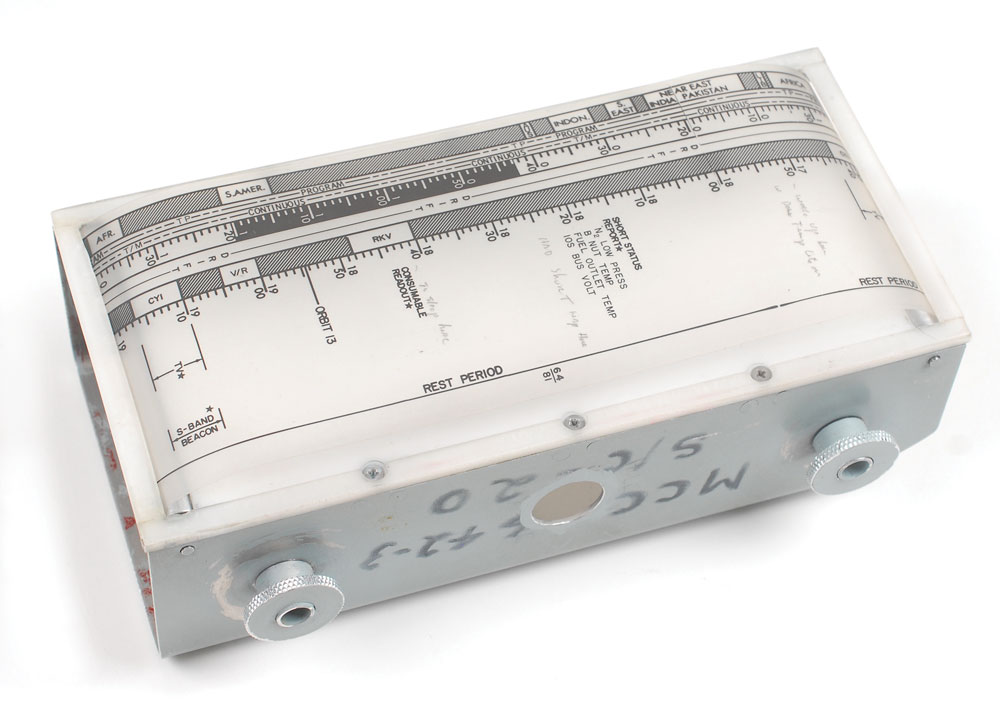 Flown flight plan and roller used by Gordon Cooper on Mercury 9, consisting of a translucent flight plan threaded through two spools contained within a metal 4 x 8.5 x 2.5 assembly, labeled on one side, “MCC 642-3, S/C-20.” The assembly has an open frame for backlighting and two knobs for rolling the long flight plan through the viewable area as the flight progressed. The plan bears Cooper’s in-flight handwritten pencil notations throughout, including: “Saw fireflies,” “Sunrise facing east,” “Remember yaw rate,” “Too much comm here from Scott,” “Short nap,” “Heard HF (Foreign language radio broadcast),” “Ate 4 brownies, drank H2O,” “To sleep here,” “Woke up here,” “Urine sample in space.” At Orbit 18, “GMT clock 10 sec fast.” In fine condition. Accompanied by a signed letter of provenance from Cooper, in part: “On May 15 and 16, 1963, I piloted the ‘Faith 7’ spacecraft on the final flight of the Mercury program. The 22-orbit mission lasted more than 34 hours, which was the longest manned American flight at the time. During that mission, I used a scrolled mylar flight plan. The flight plan was mounted in a roller type lightbox. I designed the lightbox, which was handmade just for my flight. As the mission progressed, I turned the knobs on the lightbox to scroll the flight plan forward. While I was orbiting Earth, I made several pencil notations on the flight plan to reflect events during the flight. I designed the lightbox so that I could insert a light inside the bottom of the box. I needed to illuminate the flight plan while the spacecraft was in darkness. This flown lightbox contains the following markings on its right side between the roller knobs: MCC 6(orG)42-3 S/C 20.” Also includes three other flight plan rolls.

This remarkable artifact chronicles the historic Mercury 9 mission, in which Cooper became the first American to spend more than 24 hours in space. The pencil notes jotted throughout the flight plan while he orbited Earth represent several interesting milestones and observations—notably, with his “short nap,” Cooper became the first American to sleep in space. He continued to drift in and out of sleep during a few scheduled rest periods, which he also noted in pencil on this flight plan. Highlighted by these notes on his experiences and observations while circling Earth, Cooper’s firsthand record of this historic flight is a truly historic piece. Pre-certified Zarelli Space Authentication.