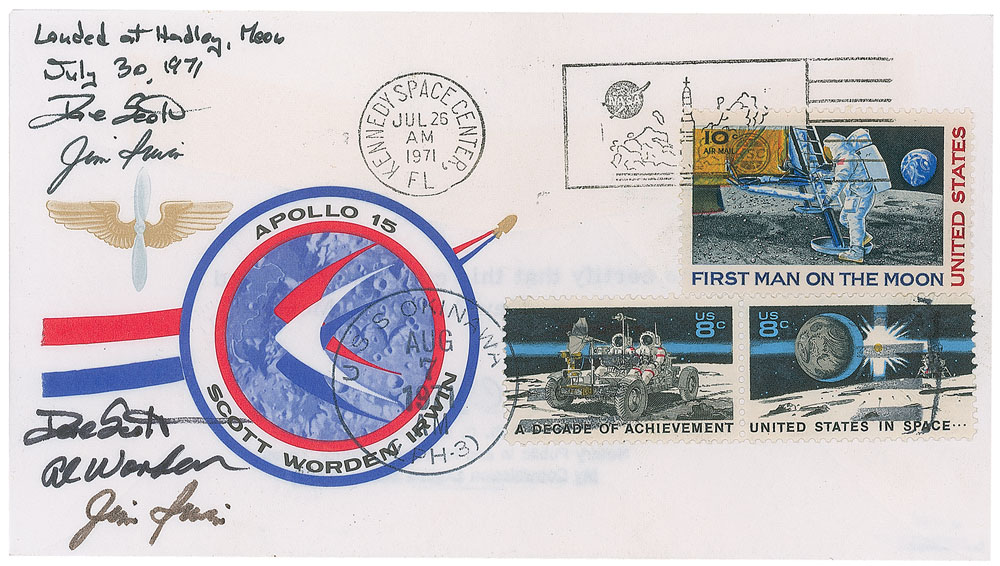 Exceptionally rare Apollo 15 flown Sieger postal cover with a cachet honoring the Apollo 15 mission insignia, signed at the top in black felt tip, “Landed at Hadley, Moon, July 30, 1971, Dave Scott,” and “Jim Irwin,” and also signed in felt tip in the lower left corner, “Dave Scott,” “Al Worden,” and “Jim Irwin.” On the reverse is the seldom-seen typed and notarized inscription that reads: “This is to certify that this cover was onboard the Falcon at the Hadley-Apennine, Moon, July 30–August 2, 1971,” and is notary stamped and signed Mrs. C. B. Carsey. Her notary raised seal is also applied to the cover. Also on the reverse, in the lower left corner, Sieger's name, "H. W. Sieger," is stamped then signed by him below a handwritten serial number, “056.” These flown Apollo 15 covers were constructed of a special lightweight material. In fine condition. Accompanied by the rarely present copy of Die Mondbrief Story; an original 1971 letter from Sieger to a potential client offering a cover for sale, as well as a follow-up letter sending the purchased cover; and the rarely encountered full package of Sieger accompaniments, including, three mailing envelopes; a ‘Decade of Achievement’ presentation booklet with two affixed stamps to interior; and an Apollo 15 “To the Moon” postcard featuring Scott, Worden, and Irwin in their white space suits. An extremely rare Sieger cover made all the more desirable by its associative material. Pre-certified Steve Zarelli.