Presented to the Mercury 7 by JFK: Carpenter’s Collier Trophy 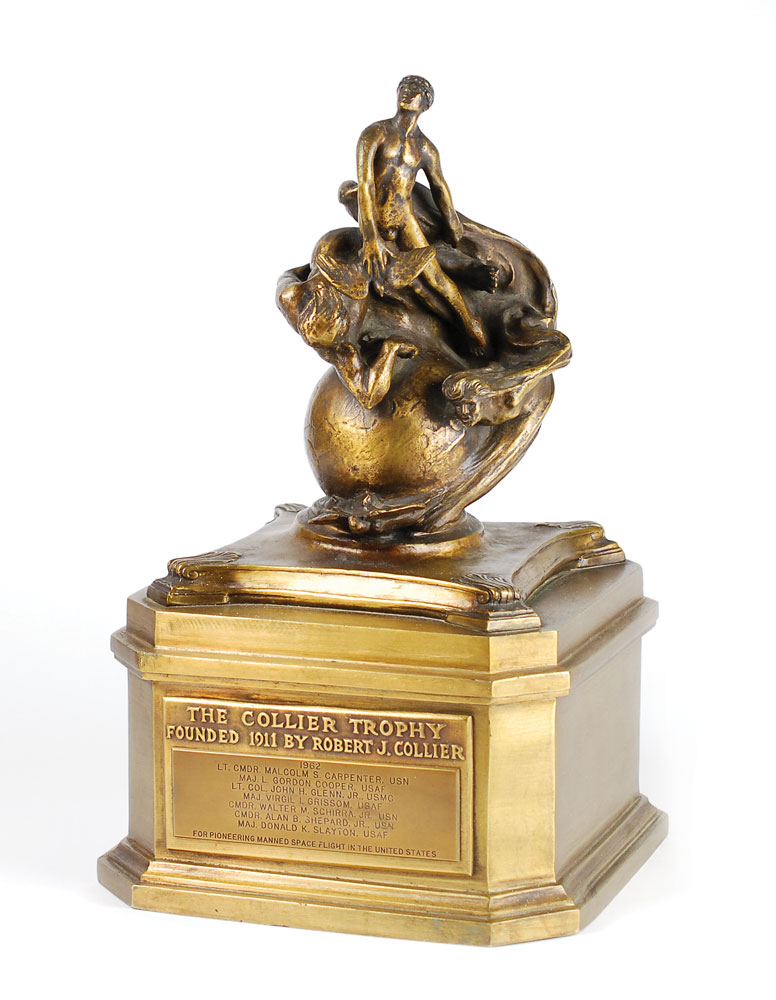 Presented to the Mercury 7 by JFK: Carpenter’s Collier Trophy

Impressive Collier Trophy awarded to Scott Carpenter as one of the members of the Mercury 7, measuring 13.5″ tall with an 8.25 x 8.25 base, engraved on one side with the names of the first seven NASA astronauts, Malcolm S. Carpenter, L. Gordon Cooper, John H. Glenn, Jr., Virgil I. Grissom, Walter M. Schirra, Jr., Alan B. Shepard, Jr., and Donald Slayton, noting that they were being honored with the 1962 award “For pioneering manned space flight in the United States.” On the opposing side of the base is raised text describing the award, in full: “Awarded annually by the National Aeronautic Association sponsored by Look Magazine for the greatest achievement in aeronautics or astronautics in America, the value of which had been thoroughly demonstrated by actual use during the preceding year.” In fine condition. Accompanied by a signed letter of provenance from Carpenter, in part: "President John Kennedy presented the 1962 Collier Trophy that accompanies this letter to me along with each of my Mercury 7 brothers. This occurred on Oct. 10, 1963 at a ceremony at the White House Rose Garden. I consider this one of [the] most prestigious honors I have ever received and have proudly displayed it in my home for many years."

Other notables in receipt of this prized trophy include Neil Armstrong, Chuck Yeager, Howard Hughes and Orville Wright. Research indicates that Deke Slayton's Collier Trophy is the only other Collier Trophy associated with a Mercury Astronaut to ever be offered for sale.