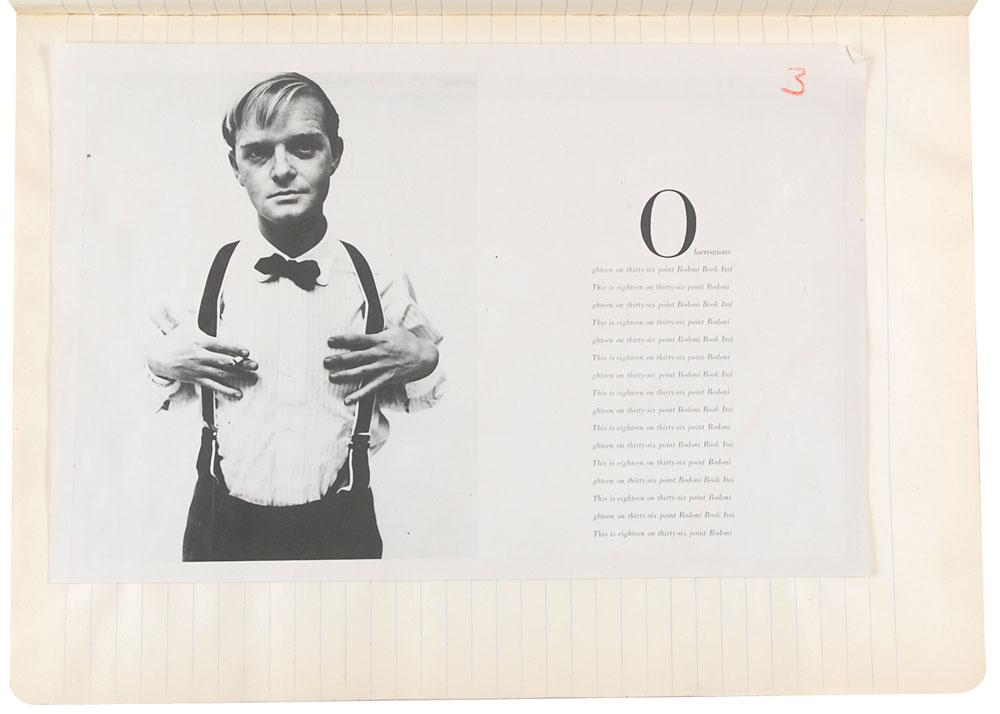 Following the title page is an introductory page for Avedon, on which the photographer penned a lengthy note to Capote: "Truman—Please don't show this to Cecil. It means a great deal to me what he thinks of it and I couldn't bear for him to see it in this half state. Dick." Avedon is most likely referring to Capote's close friend, the accomplished photographer and designer Cecil Beaton.

An early page features Avedon's images of John Huston and Alfred Hitchcock, with Capote writing below (in part): "John Huston, who seems to think he's Ernest Hemingway…because in the quality of his work, the themes he prefers to handle…never made a film did not have the basic story of his first directorial success 'The Maltese Falcon.'" Unlike what is shown here, the published book featured an enormous image of Huston on the left side with Hitchcock much smaller on the right. In 1953, Capote collaborated with Huston on the screenplay for Beat the Devil, a parody of his own Maltese Falcon starring Humphrey Bogart, Jennifer Jones, and Gina Lollobrigida.

Another page features an image of Marilyn Monroe on the left side with placeholder text on the right, labeled below in blue ballpoint by Capote, "The Divine Slob—sloppy as a banana split." In the right margin, Capote wrote in pencil: "M. M.—A bit of a slob; one would hate to live in the same house. Always late…Has the orphan mentality: wants to please everyone. Hair a mess. Her black dress with the sliding shoulder straps." The next page features a series of Avedon's sequential images of Monroe spinning around, prominently annotated at the top by the photographer: "This spread will probably be of Lena instead of Monroe." Despite Capote's harsh criticisms of Monroe, he was one of her close friends and included a tribute to her in his essay entitled 'A Beautiful Child,' which was later collected in Music for Chameleons. It is also said that Capote would have preferred that Monroe, rather than Audrey Hepburn, be cast as Holly Golightly in the screen adaptation of his novella Breakfast at Tiffany's.

On a page lacking any photos, Capote comments on actresses and American popular culture: "Miss Mary Martin—of late playing the 'national institution' angle a bit too much. Nothing is duller than an institution, though nothing is safer. The Helen Hayes of the sing-stage. To be a national institution is, very perhaps, a desirable status; the fact remains, institutions are dull: and so, dear Mary Martin, why not unlock those chains and dance forth? We don't really need a Martha Washington nor even a Helen Hayes of the sing-stage; And dammit, whoever told you we did—was it Ethel Merman?—ought to be horse-whipped."

On a similar page, headed "Bananas and Mamas—'The melancholy of performing animals,'" Capote writes a few quotes: "According to Aristotle, 'Comedy is an imitation of men worse than average; however, worse, however, not as regards any and every kind of fault, but only as regards one particular kind, the Ridiculous, which is a species of the Ugly. The Ridiculous may be defined as a mistake or deformity.'"

One of Capote's longest comments comes on the page featuring two portraits of writer W. Somerset Maugham, in part: "Maugham—As a writer: always popular, but never fashionable. As a man, unnatural. The coldness of conquered shyness." In the right margin, Capote writes a lengthy passage from Maugham's A Writer's Notebook. As a fellow writer, Maugham was always very complimentary of Capote's work—in response to Capote's first novel, Other Voices, Other Rooms, Maugham proclaimed him as 'the hope of modern literature' and respected him as 'a stylist of the first quality.'

Another page features two photos of Ezra Pound, one of T. S. Eliot, and a blank square area drawn by Capote and labeled "Aldous Huxley." Below the Pound pictures, Capote writes: "The old bull bellows; and shuts his eyes to hide a madness seen, adding "Eliot his protege" above. Below the Eliot photo, Capote observes: "An American who immigrated to England; an Englishman who emigrated to America; and both thriving, it would seem, on what the other refused."

A three-page typed letter from Avedon to Capote is affixed at the end, with his signature clipped off but several pencil corrections in his hand. It is an intimately personal statement on his art, in part: "I'm very lucky to have found photography as I am inarticulate in every way but with a camera. With a Rolleiflex I can say everything I feel. There isn't a picture in the book that isn't an expression of a feeling or an opinion…To me there is nothing that can happen to a face that isn't extraordinary and beautiful because it is part of the whole human thing. Dinenson and Maugham are beautiful on a level way above Audrey. The smile from the corner of Maugham's mouth down puts anything on Jackie Kennedy's face right out of business…I hate photographing the young. Nothing shows on their faces. Nothing has happened." He later added a second portion, in part: "Phyliss Jackson at MCA has spoken about the little type at the bottom to Simon and Schuster and the contract is being drawn up."

In overall very good to fine condition, with expected wear from production use. This was Avedon's first published book, the culmination of a collaborative effort between Avedon, Capote, and designer Alexey Brodovitch in 1945. Today it is considered one of the pillars of 20th century photographic literature, an iconic and essential work. As an original manuscript annotated by two of America's definitive artistic figures of the 20th century, this working draft of Observations is a truly extraordinary and culturally important piece. Pre-certified PSA/DNA.