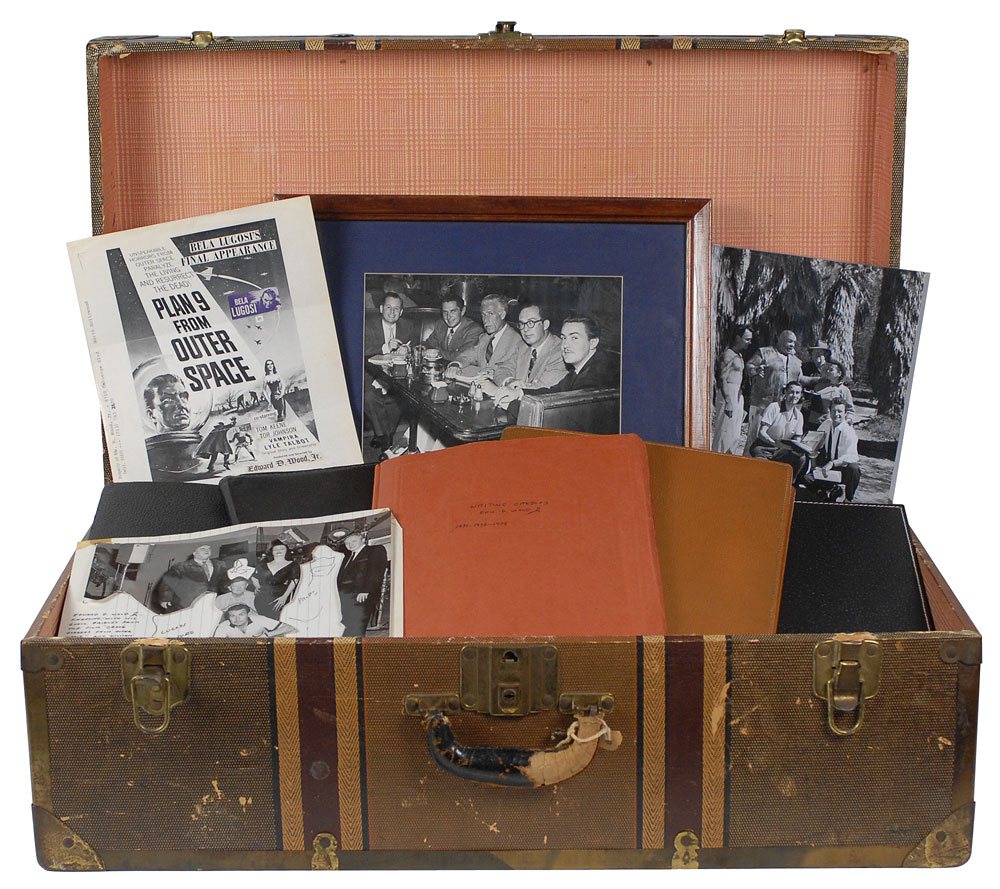 Vintage glossy 7 x 9 photo of Wood on a film set with his camera in the background and a script in his lap, signed and inscribed in black ballpoint, "To Steve, My friend a thousand times over—your Buddie always, Edw. D. Wood Jr., 1965." Handsomely double-matted and framed to an overall size of 13.5 x 15.

Material for Plan 9 from Outer Space, including: an intriguing 9.5 x 7.5 photo of Wood and the cast of Plan 9 with several areas of it clipped out, placed against a sheet with Wood's handwritten notes for what he wanted added to produce a composite image. On left side, he writes: "Edward D. Wood Jr. kneeling: with his ghoul friends from the film 'Grave Robbers from Outer Space' and William C. Thompson—the cameraman who made it all possible!!!" In the clipped area, Wood adds his ideas for a "Lugosi Picture," "Smoke," and "Props." Also includes a pressbook for Plan 9 from Outer Space with "Property of Edw. D. Wood, Jr.," typed in the margin, featuring several new design elements clipped and affixed to the cover, among them an image of Bela Lugosi added in the upper right and several changes to the fonts used for the cast listing; also includes two unaltered versions of the pressbook, which was ultimately produced without Wood's changes. Several Plan 9 stills are also present, one of them filming a scene on their crudely assembled set, notated on the reverse by Wood, "Tor Johnson. Vampira. 'Grave Robbers From Outer Space.'"

A program for Wood's extremely early play Casual Company, two pages both sides, 8 x 10, signed and inscribed on the cast listing page in fountain pen by Wood, "Dear Mom & Dad; 'Another great success for me,' Jr., October 25, 1945." The cover of the program was signed by many members of the cast, a troupe dubbed 'The Sad Sacks.' Nicely matted and framed to an overall size of 22 x 16, with a glass backing for viewing of the reverse. One of those listed as an actor in the play, J. C. Foxworthy, was later credited as an executive producer of Wood's 1959 film Night of the Ghouls. Wood had enlisted in the US Marine Corps in 1942 after the attack on Pearl Harbor and saw action in Japan, basing this play on his experiences in the military.

One lined notebook page of Wood's typed and handwritten notes on sexual terminology, 8.5 x 11, with typed dictionary definitions of the words "Aphrodisiac," "Testosterone," and "Philter or Philthe." At the top of the page Wood has penned two brief definitions: "Anaphrodisia: absence of sexual desire" and "Anaphrodisiac: asexual, cold, frigidity." He added a list of terms at the bottom in black ink: "Cleopatra ointment, Gonadol, Allurex, Aphrodex, Make Hard, Oysterex.”

A few personal items notated by Wood, including: a glossy 2.75 x 3.75 candid of him and his crew, notated on the reverse in pencil: "'Final Curtain,' Prod. #1003, Aug-25, 1957. Writer-Producer-Director Edward D. Wood Jr., Cameraman—William C. Thompson, Asst. Camera—Glenn Smith, Lights—Louis Kreiger"; an off-white slip with Wood's notes on a car: "Ford 64, Willed to Edward Wood, 1627 Strohm Ave, No. Hollywood, Phone 985-2837. Standing in his garage"; and a manilla folder with an affixed label at the top, "Sin Fernando Valley."

Binders containing about 60 stills from Wood's films, a few with his notations on the reverse, and ten small candids. Several photos are signed by various actors and actresses, some inscribed to Wood.

Various publicity-related ephemera such as pressbooks and flyers for films such as Jail Bait, The Sinister Urge, The Bride and the Beast, Fugitive Girls, and Bride of the Monster. Clippings of Wood's articles published in magazines, dozens of news clippings with reviews, ads, and movie theater show times.

Design material including preliminary mock-up designs of lobby cards for Jail Bait and The Lawless Rider; and a magazine layout for Wood's short story 'Howl of the Werewolf,' framed to an overall size of 22 x 28.

In overall very good to fine condition. Accompanied by several letters of provenance from notable figures, including Maila Nurmi (Vampira), Wood's biographer Rudolph Grey, David Ward, and Dennis Phelps. Also includes a large group of material from the estate of Wood's friend, Western actor Kenne Duncan, including scrapbooks, photos, and promo material and an original The Ghoul Goes West script from Bob Steele’s estate. An additional collection of modern Ed Wood items is included, with contents including signed photos of actors and actresses who frequently worked with Wood, magazines, VHS tapes, and various other items. With excellent provenance from classic horror actress Vampira—who made an appearance in Wood's infamous Plan 9 from Outer Space—and well-respected horror experts, this is a truly remarkable assemblage of rare and one-of-a-kind personal material from a sci-fi/horror icon. The James Collings Collection.