Amazing letter discussing God, creation, and his theory of relativity 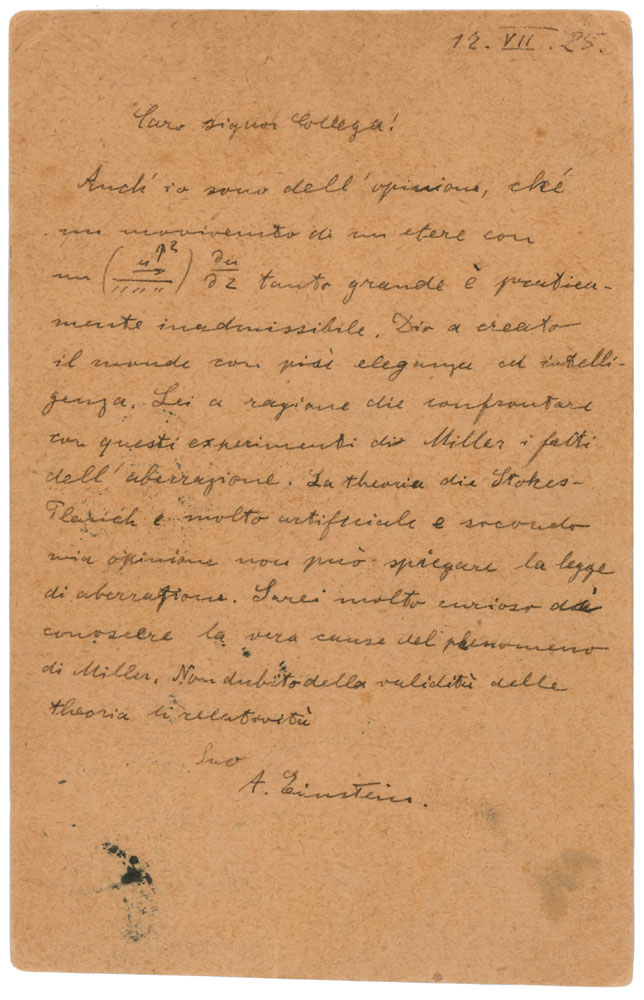 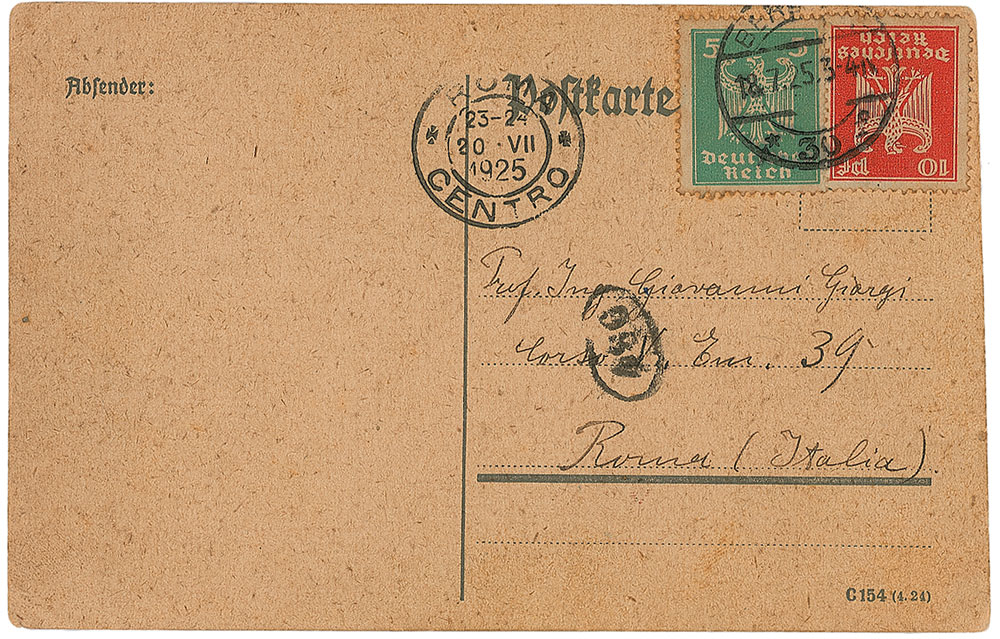 Amazing letter discussing God, creation, and his theory of relativity

ALS in Italian, signed “A. Einstein,” one page on a 3.5 x 5.5 postcard, July 12, 1925. Letter to Italian electrical engineer Giovanni Giorgi. In full (translated): “I agree with your opinion on the fact that the movement of an ether with a [mathematical expression] so high is particularly impossible. God created the world with more intelligence and elegance. You right to compare with Miller's works, the laws of aberration. The theory of Stokes-Planck is very artificial and can not—in my opinion—explain this law of aberration. I would be very curious to know the real cause of the Miller's phenomenon. I do not doubt the validity of the theory of relativity.” Also addressed on the reverse in Einstein’s hand. In fine condition, with overall toning, slight soiling and creases to corner tips, and a stray ink mark to the lower left.

This magnificent letter is rife with intriguing content—each and every sentence contains a revelatory turn and could be expounded upon at length within the context of Einstein's life and work. That it is written in Italian is notable in itself—his family had moved to Italy for a few years in the mid-1890s and, although he was fluent, letters in Italian are seldom seen. While in Italy at just 16 years old, Einstein published what is generally considered his first scientific paper, entitled 'On the Investigation of the State of the Ether in a Magnetic Field.' This presents a nice connection to the letter, which refutes some of the concepts surrounding that very topic. Especially interesting is the strong stance he takes in defense of the theory of relativity at the conclusion. Einstein had dedicated much of the previous decade to refining the study of relativity after introducing his 'General Theory of Relativity' in 1915. As Einstein's revolutionary theory grew in acceptance within the scientific community through the 1920s, a small but vocal minority emerged in opposition. Dayton Miller, an advocate of aether theory and absolute space, was one such opponent and offered Einstein experimental evidence to support his ideas. While Einstein acknowledged that a positive result for the existence of aether would invalidate the theory of special relativity, he asserted that Miller's results were erroneous and tainted by environmental factors.

The discussion of God as a creator is also fascinating. Although he did not believe in a personal deity, Einstein was not averse to speaking of God in a scientific context when discussing differing interpretations of quantum physics. In 1929, he said that he believed 'in Spinoza's God, who reveals himself in the harmony of all that exists,' and in the 1950s would write, 'If something is in me which can be called religious then it is the unbounded admiration for the structure of the world so far as our science can reveal it.' It is this conception of God that appears in the present letter, with the idea of a world designed with "intelligence and elegance" corresponding with these later notions of structural harmony. It was these harmonious structures—the things at the very core of creation—that Einstein hoped to uncover and describe in his quest for knowledge as a physicist, forming a bridge between the scientific and the spiritual. All together, this is a truly exceptional letter that encompasses a varied range of Einstein's thoughts during this period. Pre-certified John Reznikoff/PSA/DNA.