Comprehensive correspondence between Jackie and White House Curator William Elder: “My main work—as you know—has been the W. House—I still care about it more than anything” 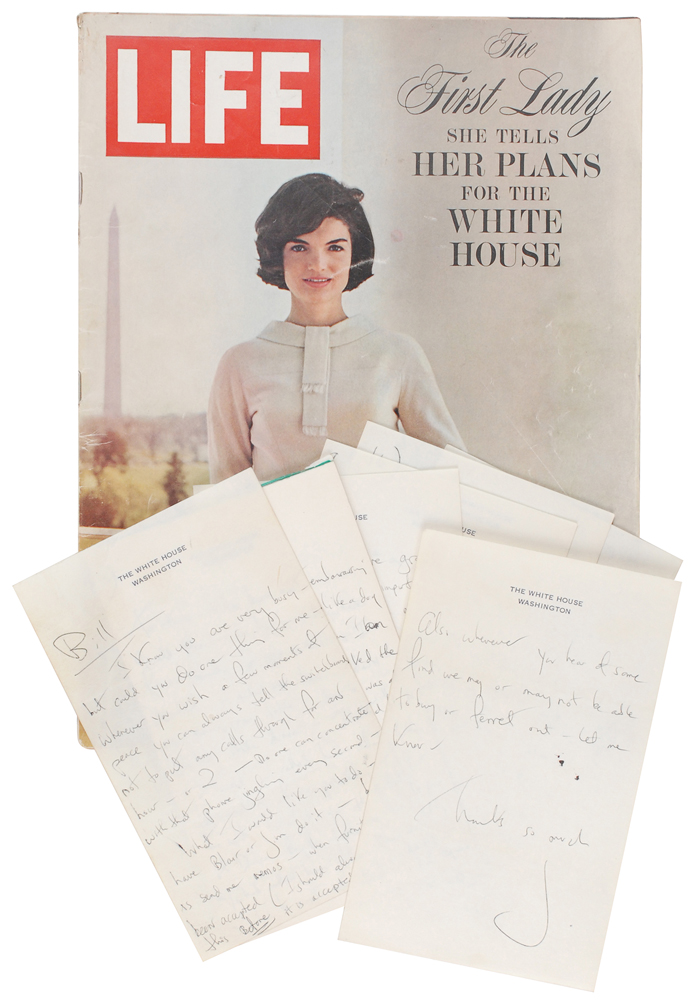 Comprehensive correspondence between Jackie and White House Curator William Elder: “My main work—as you know—has been the W. House—I still care about it more than anything”

An Overview of the Elder Archive:

As first lady, Jacqueline Kennedy’s major project was the restoration of the White House to reflect its historic past and the promotion of its importance to the American public. This is a fascinating archive of material related to her ambitious project, primarily comprised of correspondence between her and White House curator, William Elder, including:

Elder was one of her principal assistants in acquiring new pieces for the Executive Mansion, and this fabulous collection of letters illuminates the thorough, thoughtful yet intense process behind her successful mission to develop the White House as a symbol of American history and accomplishment.

Jacqueline Kennedy had first visited the White House as a tourist with her family in 1941 and left wholly disappointed, dismayed by the absence of period furnishings and lack of information on the history of the house. Unbeknownst to her at the time, she would move into the great home twenty years later. She began planning to correct this problem as soon as her husband was elected in 1960, with one of the first steps being the declaration of the White House as a museum and establishment of the position of curator of the White House. The first to serve in this capacity was Lorraine Pearce, whose work helped to make enough progress to reveal the newly restored White House to the world in a famous February 1962 hour-long CBS special in which Jackie gave a guided tour, explaining the various rooms and historical value of the pieces within. However, Jackie—demanding control over the project—could not tolerate Pearce’s independent decision making without asking for approval and her failure to subordinate her voice in drafts of the introduction to the White House guidebook. Thus, Pearce resigned ‘for personal reasons’ on August 2, 1962, and the White House staff registrar, William Elder, was promoted to the curator position; an original typed copy of the press release announcing these changes is among the unsigned ephemera in this archive.

Elder’s first major test came a month later. Newspapers broke a story regarding the discovery that a ‘Baltimore desk’ donated by Mrs. Maurice Noun of Iowa was not genuine, a revelation that took the White House—and Mrs. Noun—by surprise. A highlight of this collection is a typed memo signed by John F. Kennedy, one page, 8 x 10.5, White House letterhead, September 6, 1962, in which he tersely demands answers to eight pointed questions. In part: “It does not seem to me, after reading Maxine Cheshire’s article, that the White House handled the matter of the desk in a way fair to Mrs. Noun. I would like the answers to the following questions…Cheshire suggests that suspicions had arisen some months ago when we got the desk and that you yourself ‘had long been skeptical of the desk’s pedigree.’ I would like to know the date on which you first became skeptical…I would like to know the date on which the Baltimore Museum Curator ‘confided’ that there was ‘something unsatisfactory about the desk’…the Washington Post learned ‘months ago’ of the experts’ warnings to the White House. When was Mrs. Kennedy first informed?…Why, in short, was this matter first brought to the attention of Mr. Salinger and Miss Turnure by the Des Moines Register and not by the White House Curator?”

The Baltimore desk, represented as dating to about 1800, was placed in the Green Room and one of the featured items in the broadcast of Jacqueline Kennedy’s guided tour. In the television special, Kennedy cited Mrs. Noun by name and effusively praised her generosity, noting that the desk was the first piece of unsolicited fine furniture donated to the White House. The desk was already in place in the Green Room when Elder was hired as registrar in November 1961, and he was unsure of its authenticity from the beginning. Upon examination by more experts, enough suspicion arose that the desk was disassembled and found to be constructed of newer wood. They determined it to be a reproduction from about 1880—still old, but not a gem of early American furniture. Given the circumstances—the televised publicity and the fact that Mrs. Noun had already taken an $18,000 tax deduction—Elder and Jackie had decided to keep the piece in the White House but remove it from the Green Room and replace it with a legitimate period piece. While JFK was upset with Elder for the position Mrs. Noun was put in, Jackie was even more enraged with the press—she feared that fallout from this mishap could derail her plans for further restoration, but skillful damage control quieted it quickly.

The lengthiest, most impressive ALS by Jackie is signed, “J,” twelve pages, 5 x 8, White House letterhead (pages two through seven are still connected at the top, having originated from a WH letterhead notepad), in part: “You are a marvelous & devoted curator..but...Do not accept anything without letting me pass on it first...even if it is some old lady whom Harry DuPont has told we will take her grisaille bathtub...let me know immediately. I see these people all the time..I cannot expect them to slave for me—if I do not show prompt appreciation. My main work—as you know—has been the W. House...having you here instead of Lorraine—is paradise—but I do not wish to be cut off completely—as I still care about it more than anything—& I want to be kept up to date on it...you must receive grand curators and take important groups on tour—That is a nuisance for you—but you do it with such grace you make us (the W. H.) many friends...(That was all Lorraine ever wanted to do—& told me we couldn’t possibly get a guide written for 5 yrs)...Jim Fosburgh said you told him she is planning to write a book—when you hear perilous things like that let me know immediately—so I can see that it’s done the best way without hurting us or detracting from our guidebook sales...You & I are the backbone of this whole business...I want to go over the whole layout & text & replacing pictures for the new issue of guide I had them take Queens Room horizontally.”

The second longest ALS by Jacqueline Kennedy is signed “J.,” five pages, 5 x 8, White House letterhead, and describes in specific detail several different pieces of furniture and other decor she would like for the White House. In part: “You know what I’m interested in—side tables—French—or even Haitian marquetry—not frou frou. A big round table de milieu—either black or with marble-top & wood legs…A set of dining chairs—They must be comfortable for a man so sit in them either Louis XVI Biedmeir—Empire—Directoire...Any Memento—JFK adores these—Andrew Jackson’s tooth pick—or old coins gold—for buttons—like I tried to buy at Parke Bernet…Do you know my Judith Lewis painting to left of fireplace in Oval Room—any rather exotic scene like that—even still life with parrots or peacocks & unmuddy colors—I’d like—but not those boring Eng[lish] ones of horses & hounds all running & yelling Yoicks.”

The other seven handwritten letters and notes from Jackie contain interesting content regarding the restoration, generally touching upon new acquisitions or placement of things around the White House:

Excerpts From Jackie’s Responses to the Curator:

On a July 20, 1962 letter from Elder, Jackie copiously annotated her responses on the margins. She wrote: “I really want this legend so future Pres[ident’s] wives will know what’s what in each room & not toss it out or to the basement—I picture a frame that could be lain on a table & people could pick it up & look at it—State dinner guests etc.” She adds a sketch of her vision on the reverse, drawing the Green Room and identifying three objects: “1. Andirons belonging to Pres. Zachary Taylor…2. Baltimore Classical ladies desk…3. Mirror used by Washington in Phila[delphia]—gift of Mt. Vernon.”

On a November 7, 1962 letter from Elder informing Jackie that they “have received a request from the Republican Women’s Committee to have a ‘portrait plate’ made of Mrs. Eisenhower to add to the collection in the cases in the Gold Room,” the first lady responds: “Bill—this is a hot one—it would be all we need for Repub[lican] women to say we wouldn’t show Mamie’s plate.”

On a May 10, 1963 letter from Elder, Jackie responds concerning the difficulty of accurately reproducing a color photo of JFK to be used in the White House guidebook. Elder suggests they use the famous Bachrach photo of the president and Jacqueline replies to the proposal at the bottom, insisting on the color photograph: “Use this—it gives a feeling of the office of the Presidency—& the gloomy color even adds to the oppressive feeling—Probably he will no longer be Pres. when this new edition is sold out—but I promise to get him to pose for a new picture like this one in the next yr...I HATE all other pics of Pres.—only this one will do.”

The remaining pair of items signed by Jackie are the White House print and special copy of the White House guidebook, both given as gifts to Elder: a color 6 x 4 print engraving of the White House as it appeared in 1805, presented in a 10.75 x 9 mat, signed and inscribed on the mat in blue ballpoint, “For Bill—to whom this building is not unfamiliar. With our greatest appreciation, Jacqueline Kennedy, Christmas 1962,” and framed to an overall size of 12 x 10.5; and a special limited edition leatherbound copy of The White House published by the White House Historical Association in 1962, numbered 21/100, bearing an ANS on a White House notecard affixed to the colophon, signed “Jacqueline Kennedy,” in full: “At last our guidebook is a reality!—and I can never thank you enough for all you did to make it possible.”

Also present is a fantastic January 22, 1964, TLS from RFK, signed “Robert Kennedy,” two pages on embossed “Office of the Attorney General, Washington, DC” letterhead, plus a four-page attachment. Lengthy letter regards Mr. Elder’s inclusion in the Kennedy Administration’s Oral History. The archive also includes a substantial amount of related ephemera, including Elder’s handwritten notes and lists of furnishings, his rough draft of a letter concerning the future of the restored White House from December 1963, magazines from the period discussing the subject, letters to Elder from various other figures, a plaque seemingly for a Benjamin Franklin portrait, and an array of other material. In overall very good to fine condition.