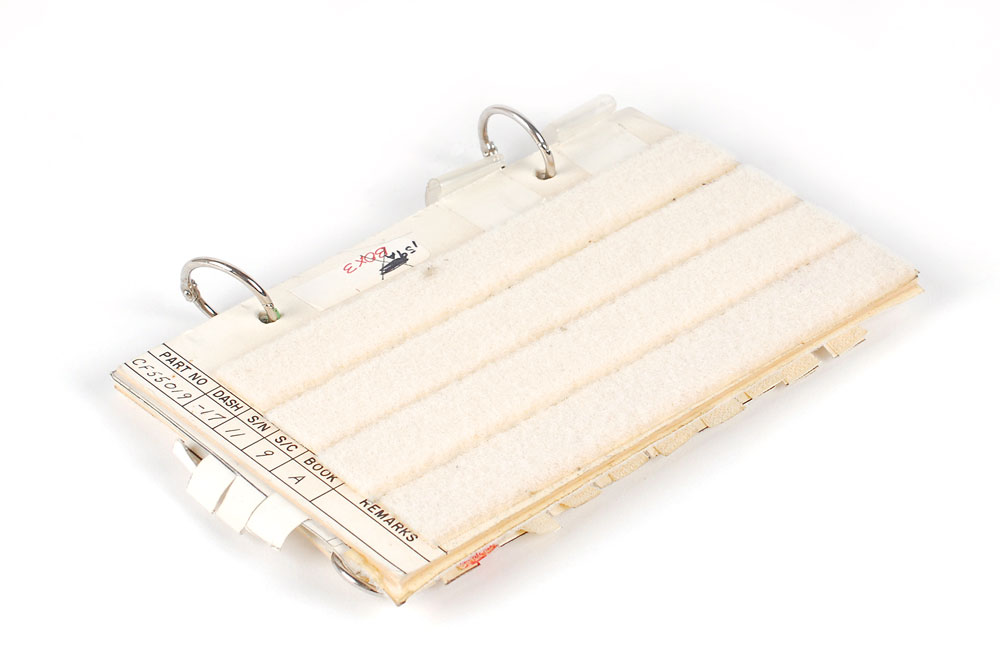 Important flown complete extravehicular activity checklist used on Gemini 9A, consisting of eleven double-sided cardstock pages bound with two metal rings, 5 x 8, labeled on the front: “Part No CF55019, Dash -17, S/N 11, S/C 9, Book A.” Annotated on about half of the pages in Cernan's hand, the checklist outlines the tasks for his EVA, the primary goal of which was connecting to and testing the Astronaut Maneuvering Unit (AMU) rocket-powered backpack. The procedures for connecting to the AMU appear on the third page and fourth pages beneath the heading "Adapter Preparation & AMU Inspection," under which Cernan has written "Check O2 Press," a notation that appears several more times throughout the checklist. Following the instructions for the intended testing of this new equipment is a notation reading "Perform Rescue Mission." Each page bears an affixed Velcro tab that would attach to a strip inside the front cover as they were turned. Both the front and back covers also bear several affixed Velcro strips. Expected light wear from use, and some Velcro tabs partially detached, otherwise fine condition.

Cernan's ambitious spacewalk proved much more difficult than expected and became compromised due to fatigue from the generally strenuous task of moving in space, which was furthered by his stiff suit and unruly umbilical tether. By the time he got to the AMU stored at the rear of the capsule his body was overtaxed and overheating, his visor had fogged over to zero visibility, and his heart raced to three times its normal rate. Cernan was able to successfully detach from the AMU but he, Command Pilot Tom Stafford, and Mission Control agreed that attempting to use the AMU was too risky and aborted the rest of the planned EVA. He labored back to the hatch and Stafford helped to pull him in safely. Despite the failure to test the AMU and make the first-ever untethered spacewalk—an endeavor that went unaccomplished for nearly forty years—Cernan's harrowing EVA was extremely important in that it revealed shortcomings in procedure and equipment. It produced profound changes in spacesuit designs, including improved cooling methods, anti-fogging for visors, tethers, and umbilicals, and initiated the use of underwater training to prepare for the taxing zero-g environment. Pre-certified Zarelli Space Authentication.