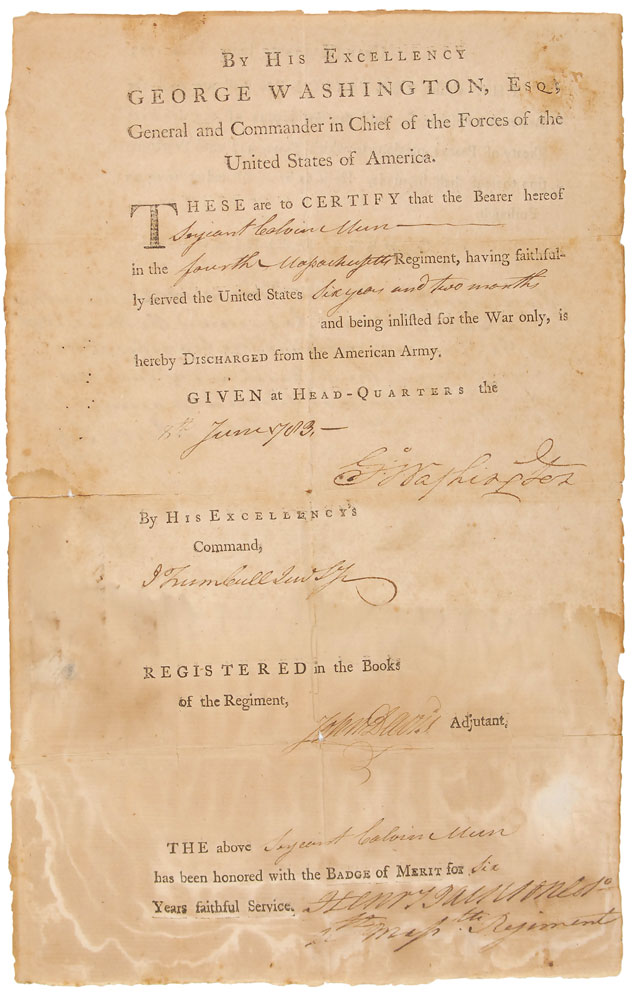 Partly-printed DS, signed “G:o Washington,” one page, 7.75 x 12.25, June 8, 1783. Rare military document, in full: “By His Excellency George Washington, Esq; General and Commander in Chief of the Forces of the United States of America. These are to certify that the Bearer hereof Serjeant Calvin Mun in the fourth Massachusetts Regiment, having faithfully served the United States Six years and two months and being inlisted for the War only, is hereby Discharged from the American Army.” In very good condition, with intersecting folds with some partial tape-repaired separations, and moderate to heavy scattered staining, toning, and soiling; Washington’s signature remains extremely crisp and bold, as does all other writing. Accompanied by an attractive cloth mat with an engraved portrait and nameplate for display.

An active soldier for six years during the Revolutionary War, Calvin Mun served in Captain Elnathan Haskell's company in Colonel William Sherpard's regiment, the 4th Massachusetts, which saw action at the Battles of Princeton, Saratoga, and Monmouth, among others. Near the end of the war, he reported to be attending to sick soldiers in Virginia. This immensely desirable document, issued within two months of the end of the Revolutionary War, features a large, crisp signature of General Washington shortly after achieving his goal of American independence. Pre-certified John Reznikoff/PSA/DNA.