Lot #3171
Margaret Mitchell Collection of Gone With the Wind Letters

Gone With the Wind letters regarding Rhett, Ashley, and Scarlett 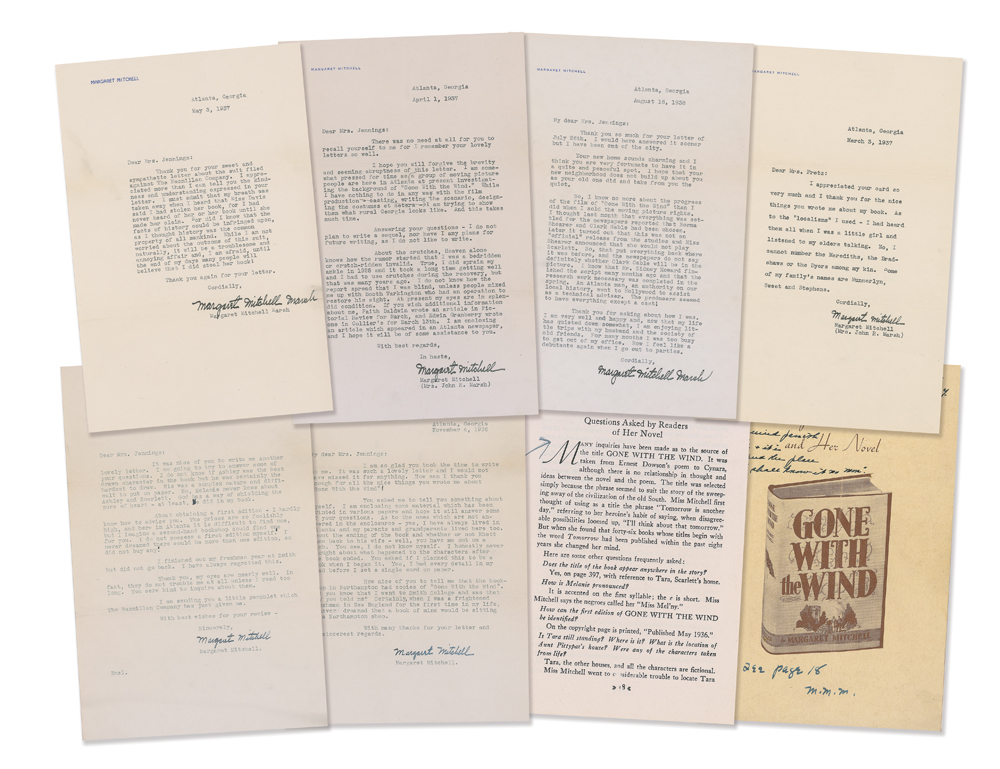 Gone With the Wind letters regarding Rhett, Ashley, and Scarlett

November 4, 1936—“About the ending of the book and whether or not Rhett came back to his wife—well, you have me out on a limb. You see, I do not know myself. I honestly never thought about what happened to the characters after the book ended. You asked if I planned this to be a book when I began it. Yes, I had every detail in my head before I set a single word on paper.”

November 23, 1936—“I do not know if Ashley was the best drawn character in the book but he was certainly the hardest to draw. His was a complex nature and difficult to put on paper. No, Melanie never knew about Ashley and Scarlett. God has a way of shielding the pure of heart—at least, he did in my book.”

April 1, 1937—“I am somewhat pressed for time as a group of moving picture people are here in Atlanta at present investigating the background of ‘Gone With the Wind.’ While I have nothing to do in any way with the film production—casting, writing the scenario, designing the costumes et cetera…I do not plan to write a sequel, nor have I any plans for future writing, as I do not like to write.”

August 16, 1938—“No, I know no more about the progress of the film of ‘Gone With the Wind’ than I did when I sold the moving picture rights. I thought last month that everything was settled for the newspapers reported that Norma Shearer and Clark Gable had been chosen. Later it turned out that it was not an ‘official’ release from the studios and Miss Shearer announced that she would not play Scarlett. So, that put everything back where it was before, and the newspapers do not say definitely whether Clark Gable will be in the picture.”

Also included are: an informational booklet about Mitchell and her book, with a notation to the front cover in Mitchell’s hand, “see page 18, M.M.M.,” with an arrow drawn on the page with the article; an unsigned 1938 Christmas card, with the envelope addressed in Mitchell’s hand; and a five-page typed transcript of an interview given on the radio on July 3, 1936, with Mitchell adding her return address (no signature) on the reverse of the envelope.

The final component of the archive is an 8.5 x 11.5 scrapbook, meticulously compiled by the admirer of Mitchell. Each page contains affixed newspaper clippings and photos about Mitchell’s acclaimed novel, several reviews, the casting, production, and premiere of the film in both Atlanta and Philadelphia, and articles of Mitchell’s tragic accident and passing. Loose in the scrapbook are transcripts of a couple of interviews, a second informational booklet, a typed biography, and a gray-bordered card from Mitchell’s family, thanking the recipient for her kindness and sympathy.

Published in 1936, Mitchell’s novel became the top fiction seller in the country for two straight years. The public’s rabid fascination with the characters and their relationships is plainly visible in these letters, as the correspondent was peppering Mitchell with questions outside the boundaries of the story, wondering if Rhett ever returned to Scarlett or if Melanie was aware of Scarlett and Ashley’s relationship. Although she had no official input on the 1939 production of the film, Mitchell was interested in the film’s casting, which according to one of her letters was still apparently unsettled. Any single letter alone from Mitchell regarding any aspect of her Pulitzer Prize-winning epic are in high demand, the collection offered here, full of great Gone With the Wind content, represents an amazing and chronological offering as her book and upcoming film captivated the country. Pre-certified PSA/DNA.