Jackie pours her heart into building a Virginian retreat for Jack 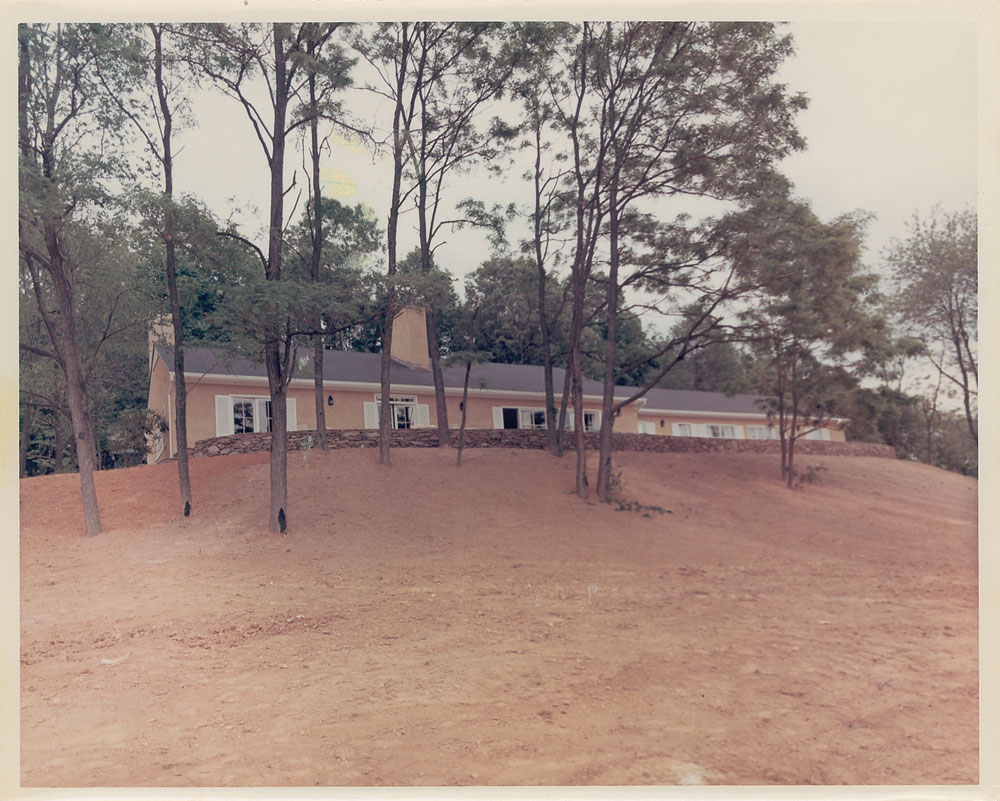 Jackie pours her heart into building a Virginian retreat for Jack

Extensive archive of over 400 pieces covering nearly all construction and design aspects of the Kennedy’s Wexford home built near Middleburg/Atoka Virginia. Included here is all of the 1961–1964 correspondence between Jacqueline Kennedy and the building agents, with an emphasis on 1963, the main year of construction.

The most important items in the archive are those which Jackie herself penned. Included are ten letters handwritten by Jackie (five particularly lengthy and detailed ones written on large yellow legal pad paper); two are signed “Jackie,” one “J,” and two are unsigned—all are undated. In one of these long letters Jackie exclaims, “This house may not be perfectly proportioned—but it has everything—all the places we need to get away from each other—so husband can have meetings...wife paint...all things so much bigger houses don’t have. I think it’s brilliant!” In another she raves, “You have done the most fantastic job and everyone agrees that house is really a dream. One could not wish for anything more perfect—if only we could live there all year long! And Jack loves it.”

The five shorter ALSs are on various types of letterhead (three White House, one mourning, and one plain). Three of them are signed “J,” one “Jackie,” and one “JBK.” Also present are eight typed letters, dated from December 1962 through September 30, 1963, on White House letterhead, and all signed, “Jackie.”

Of particular interest are the ten 11 x 14 magazine pages (mostly French but one Home and Garden) which the first lady tore out and wrote interesting design notes on. Also present in the archive are five layout sketches in Jackie’s own hand, each in various levels of detail. On a 6.5 x 5 plain scrap of white paper, she sketched out in pencil nearly the entire home, and labelled it, “19 units, 16 x 16, 4864 sq. ft.” There are also two lists (one on White House letterhead, the other on yellow legal paper) where Mrs. Kennedy wrote out all of the rooms (dimensions were added later in another hand).

The majority of the collection is made up of three large binders containing over 300 pages of material, including the original 1962 deed, letters (many transcription copies of letters the building agent mailed out), paperwork, ‘special account’ bank records, and receipts spanning 1961–1964. The majority of the archive is centered on 1963 but there is also a sizeable portion from 1962 and 1964, and a tiny sampling from 1961.

Also present are two large brown folders containing 18 oversized building plans, most measuring around 35 x 20. Subjects include: building elevation, kitchen, fireplaces, bedrooms, barn, and pools. Additionally included are 26 spectacular official White House photographs of the Wexford home: seventeen are of the complete and fully furnished home’s individual rooms, and five are of the outside of the completed home, each stamped on the reverse, “Robert L. Knudsen, The White House, May 22, 1963.” The remaining five are aerial shots of the home taken during construction, stamped on the reverse, “By R. L. Knudsen, PHC, USN Office of the Naval Aide to the President,” and dated either December 5, 1962, or December 31, 1962. There are also two unofficial black and white photos of the home’s interior.

The Kennedy’s building agents were a husband and wife who were close personal friends of theirs and lived Middleburg, VA. Jackie knew the couple from their mutual equestrian pursuits; the husband handled most all of the Wexford building plans and correspondence. Well versed with the location, the couple scouted the area, purchased the land, and handled all of the building on behalf of the Kennedys. The front was also key in keeping the plans secret from the American public to avoid an outcry over Jackie’s extravagant spending.

With construction beginning in late 1962 and completed in Summer 1963, Jackie worked tediously to build the perfect retreat for her husband. As if to sway his opinion, she named it Wexford—a nod to JFK’s Irish roots. The Middleburg/Atoka, VA estate, located in the heart of hunt country exhibits telling attributes centered around what the first lady enjoyed most: the sprawling countryside, boundless room for fox hunting, and horses. It appears, Jackie intended to share her life-long passions with her husband to strengthen their bond, as these activities were in such strong contrast to JFK’s own loves, namely: the Kennedy family’s Hyannis Port compound, sailing, and the open ocean.

Throughout her correspondence, Jackie shows her impressive attention to detail and penchant for frugality. Though seemingly uncharacteristic given her wealthy upbringing and privileged marriage, her cost conscious nature stemmed from the 1929 stock market crash which cast a shadow of uncertainty over the Bouvier’s finances. Given the American public’s scrutiny of every move of the Kennedy purse strings, coupled with JFK’s watchful eye, the first lady was understandably perched on high alert of overspending—she walked a thin line of keeping her lavish lifestyle with her cost conscience mentality. This detailed paper trail reveals that Joe Kennedy Sr. paid for the entirety of the project; one letter documents the final amount his firm put out as just over $127,000.

This one-of-kind archive—on which an entire book could potentially be written—breathes life into Jacqueline Kennedy's deep-seated desire to construct a countryside oasis for the president. Her heartfelt, painstakingly detailed notes are preserved here in her letters, sketches, and hand-notated designs. At the time, the first lady was struggling amidst Jack’s continual infidelities and the heartbreaking August 1963 loss of their son Patrick. Jackie went to great lengths to ensure her husband’s every need was met—especially when it came to his fragile health—debating over the size of his closet and location of his bedroom window.

Thurston Clarke’s book JFK’s Last Hundred Days, chronicles the Kennedy family’s Wexford timeline, confirming that they spent three straight weekends there—the last of October and the first two of November—just over a week before his death. The author bluntly states that the president was strongly opposed to the building of this Virginia home, only giving in upon his wife’s persistent pouting: an act that had a knack of winning Jack over.

His one insistence was that the home be modest. The first lady agreed to keep the cost under $40,000, but it soon grew to $60,000 and eclipsed $100,00 upon completion. Though skeptical on their first visit, Jack had warmed up by the final retreat on November 10—all of which is documented in the JFK Library’s heartwarming videos taken by White House photographer Cecil Stoughton. Jackie must have felt that all her hard work was rewarded when she confided in her close friend, artist Bill Walton, “I think we’re going to make it. I think we’re going to be a couple. I’ve won.”

Wexford was the Kennedy’s first real home as a complete family unit, fashioned in light of Jackie’s ideals and built from the ground up. Tragically, President Kennedy only spent three weekends at the Wexford estate before his assassination on November 22, 1963. This collection serves as proof of Jackie’s profound, continual love for Jack—a chance to revive their marriage following their renewed closeness—and serves as a tangible remembrance of the vibrancy and hope of Camelot.
Footage of the Kennedys captured by Cecil Stoughton at Wexford, November 10, 1963.
Footage of the completed interior and exterior of Wexford, from May 25, 1963.