Lot #1001
The First Hasselblad in Space 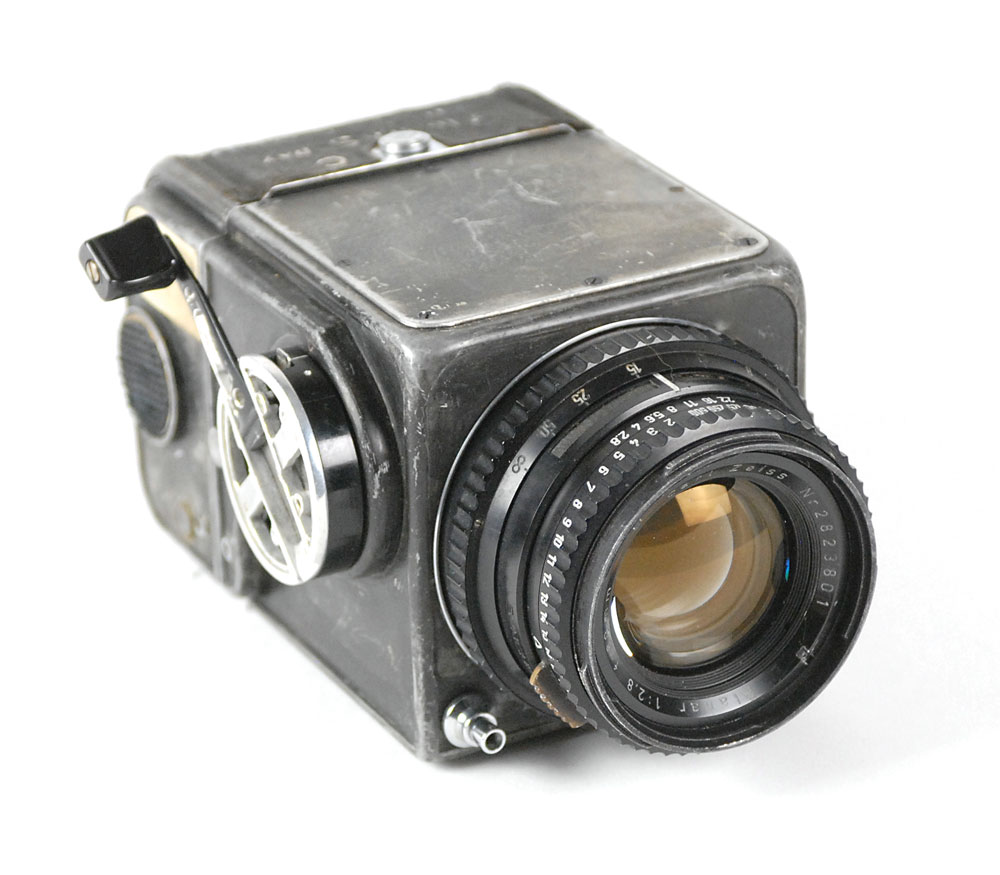 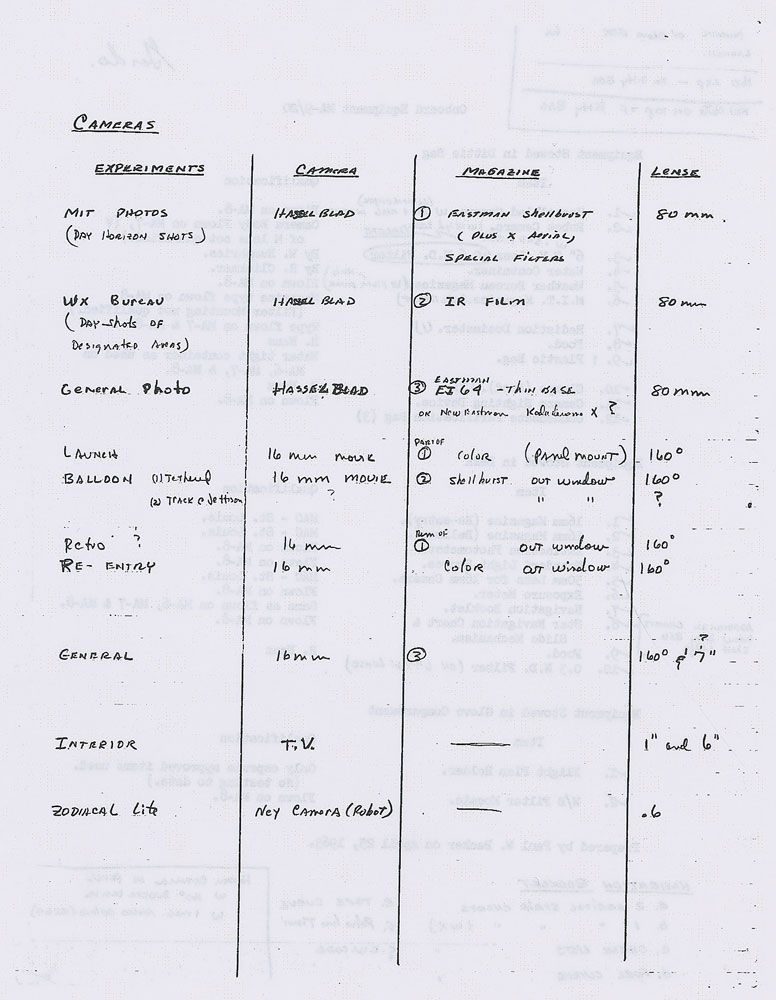 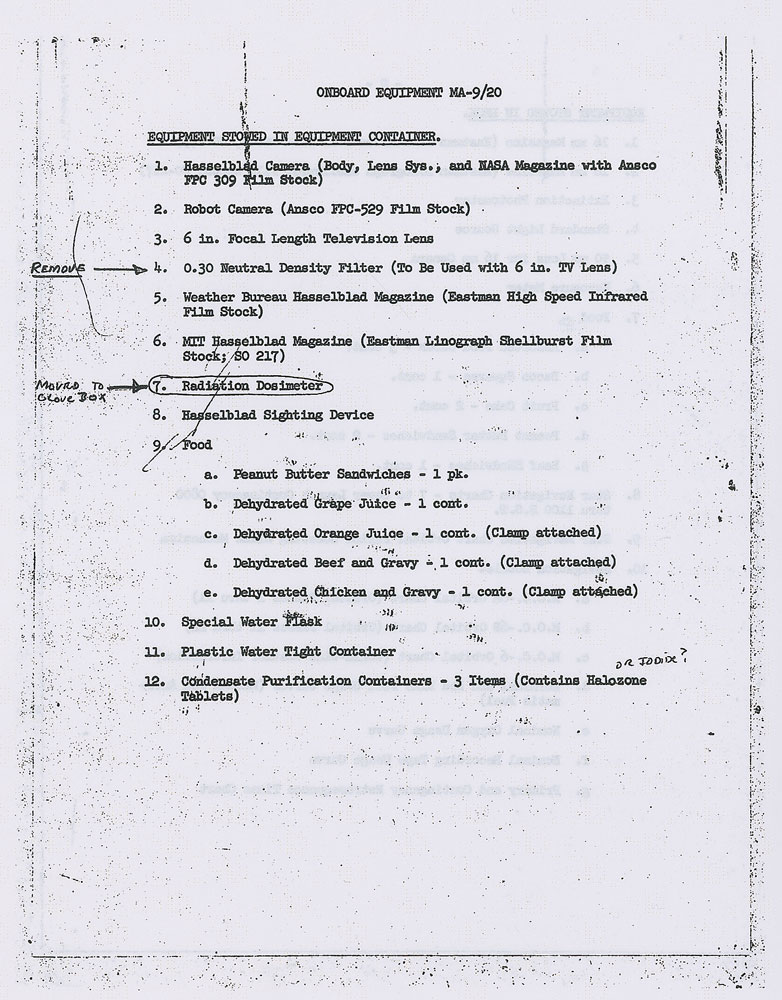 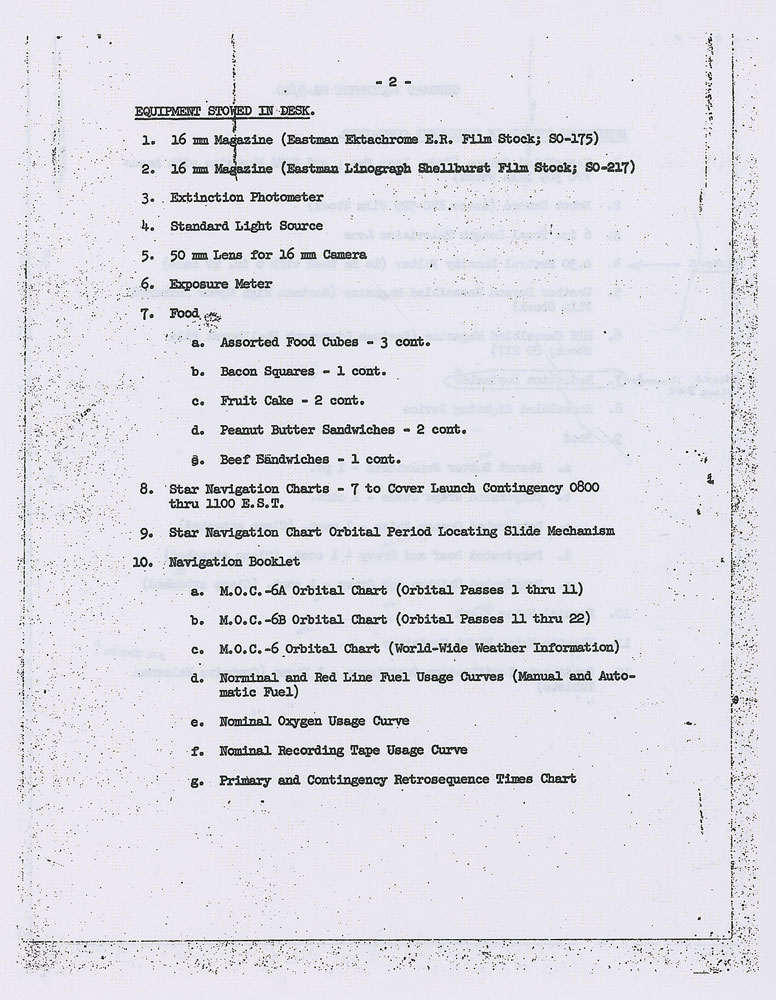 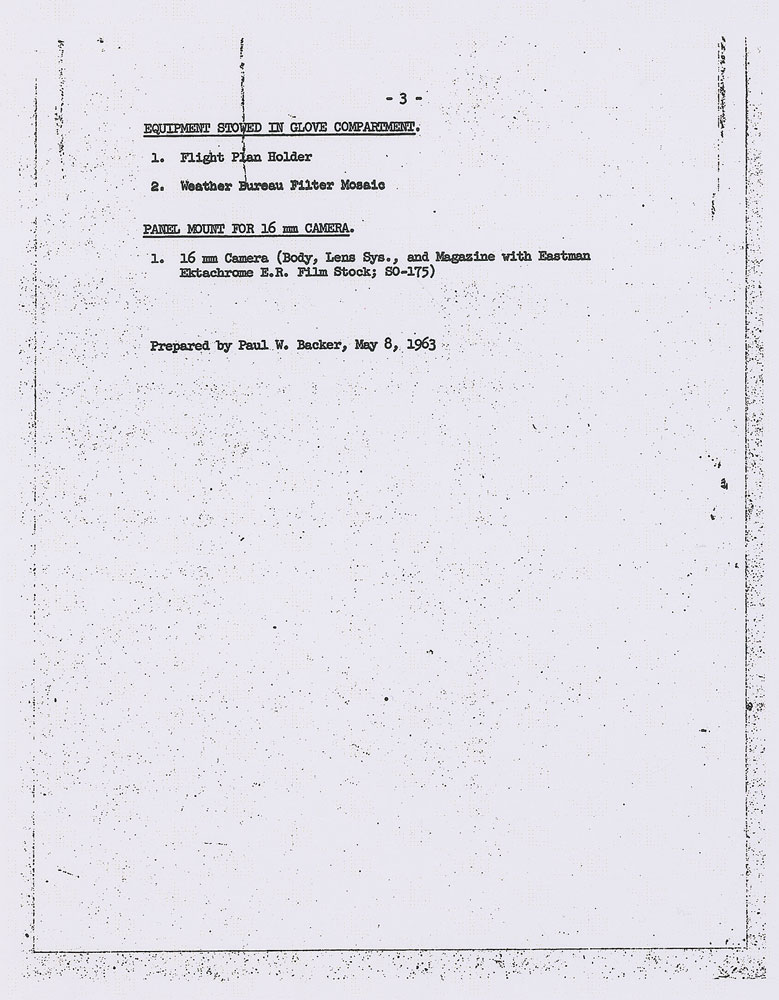 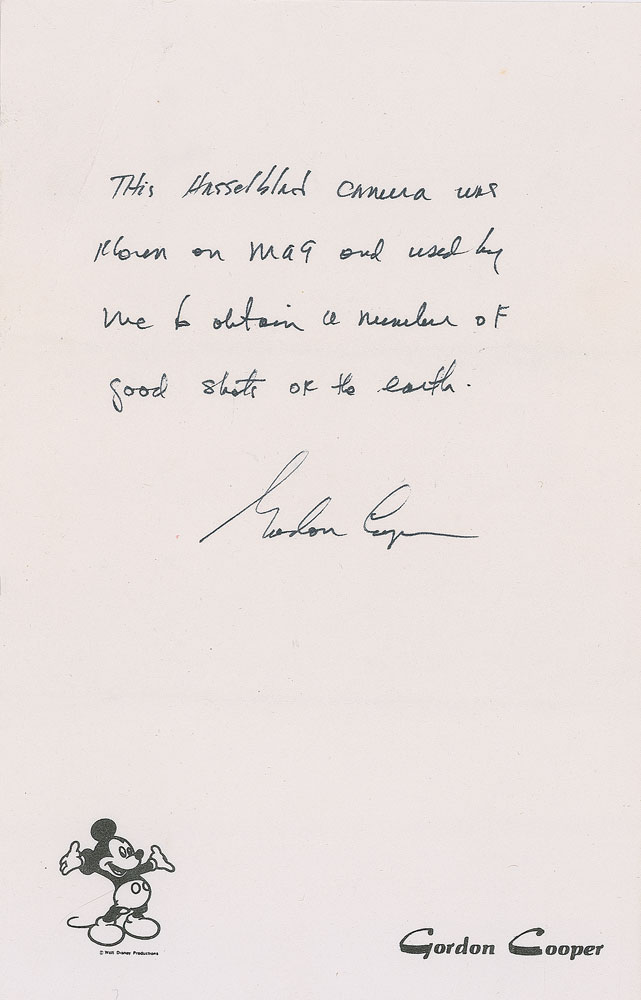 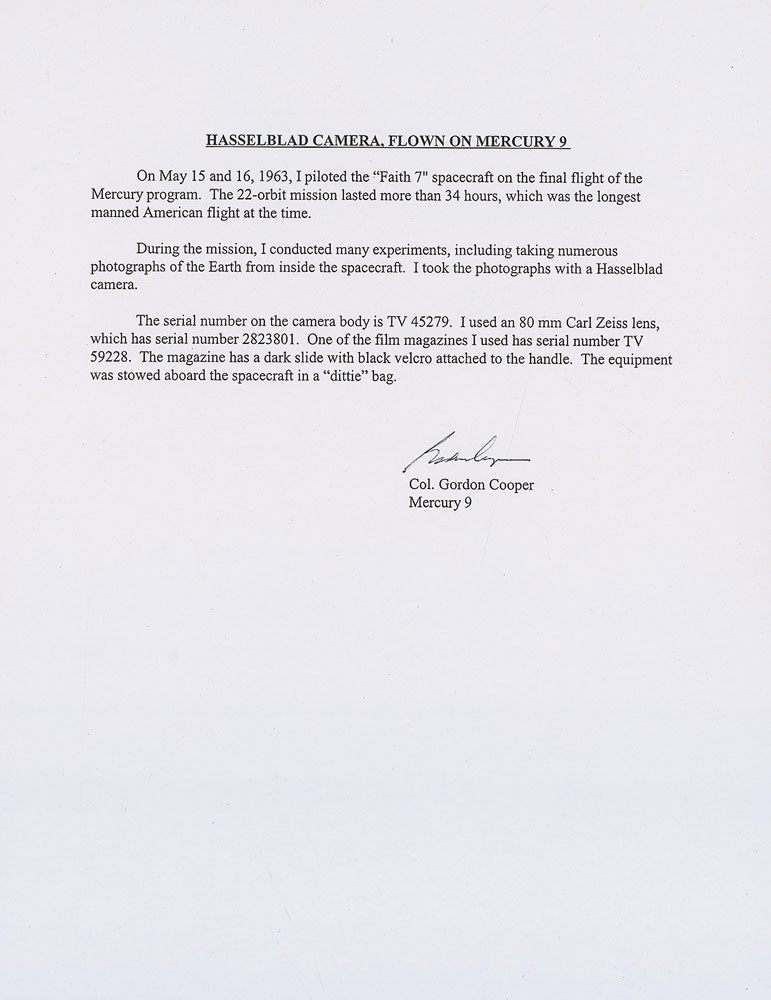 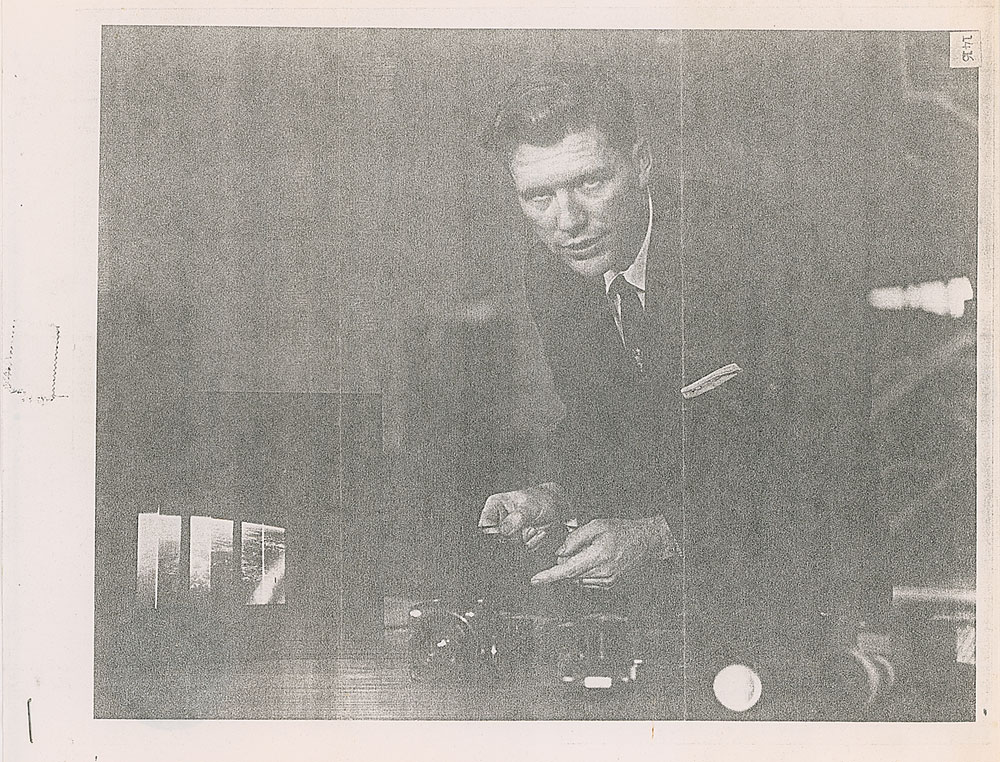 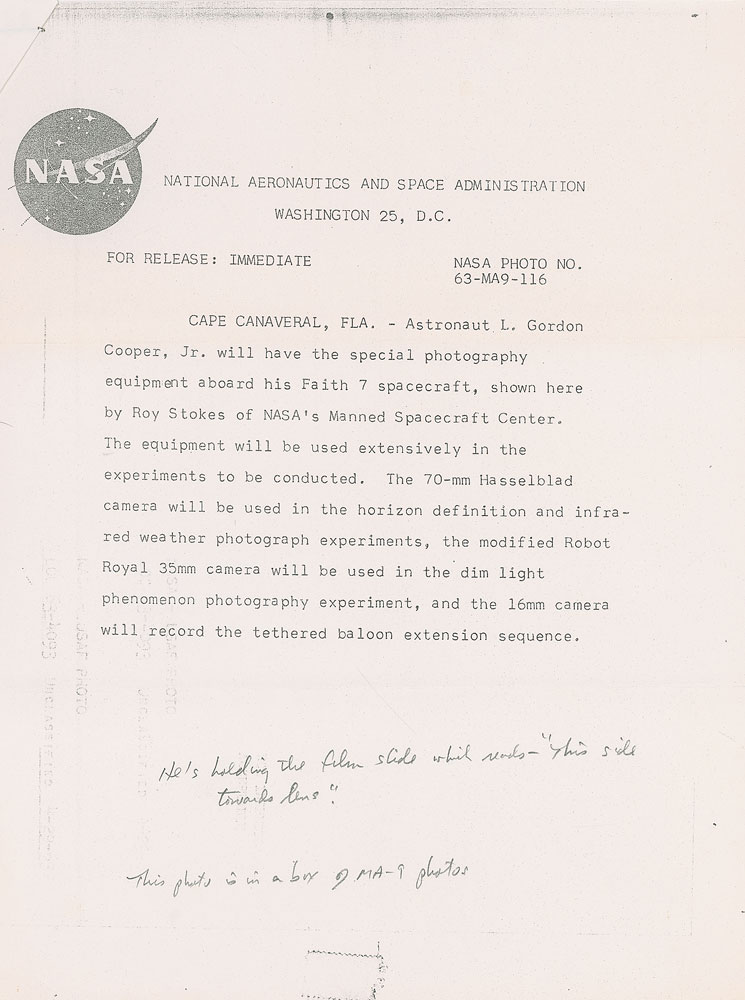 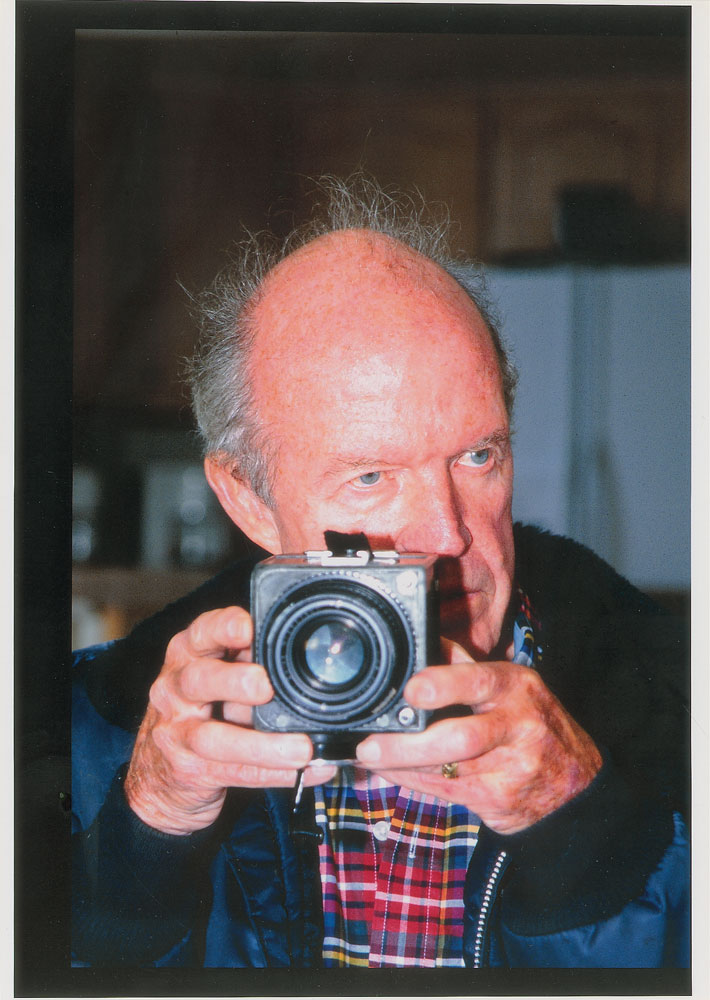 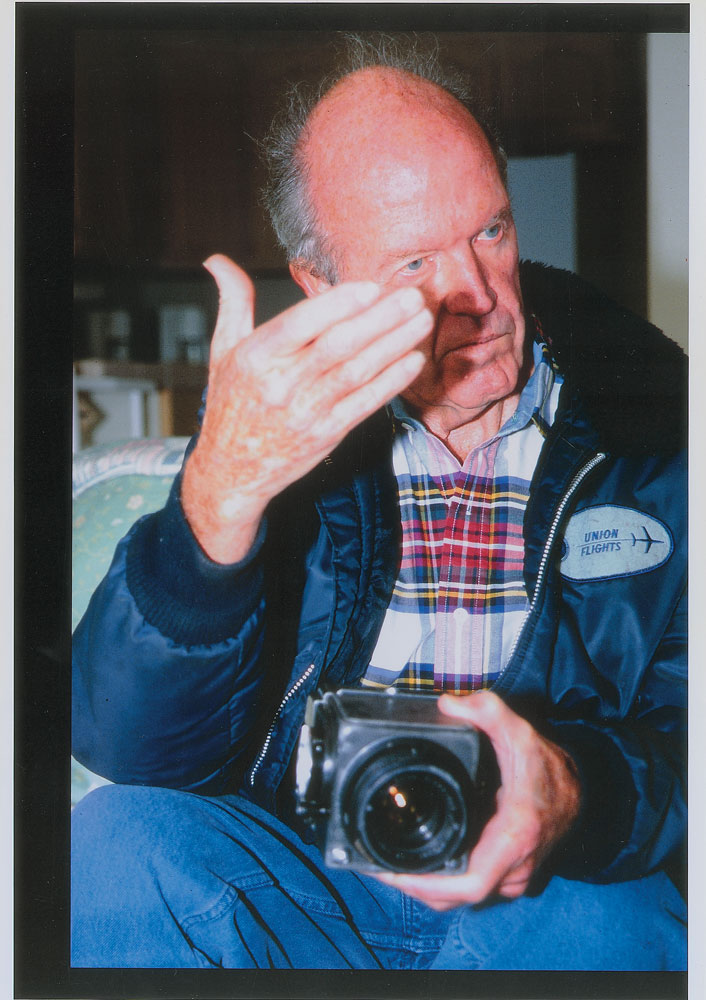 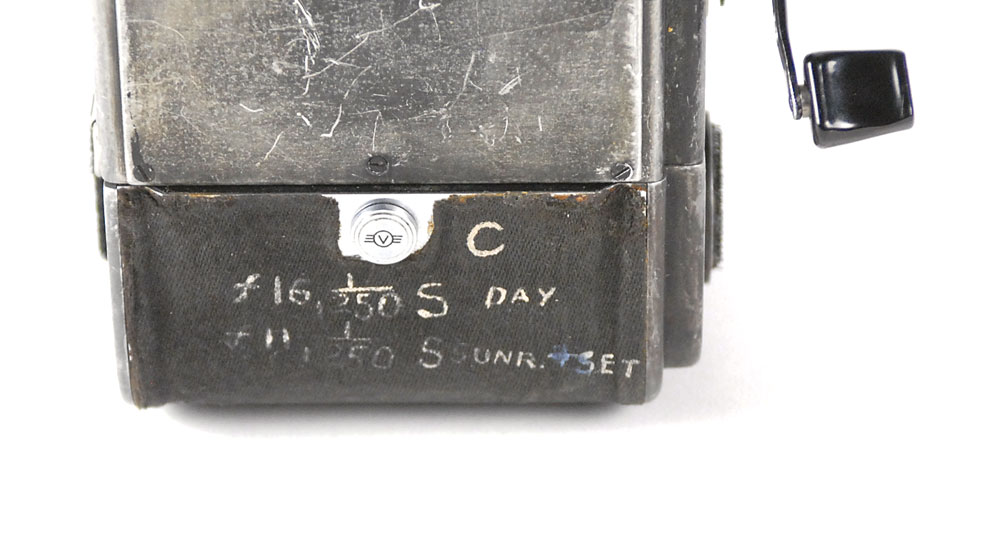 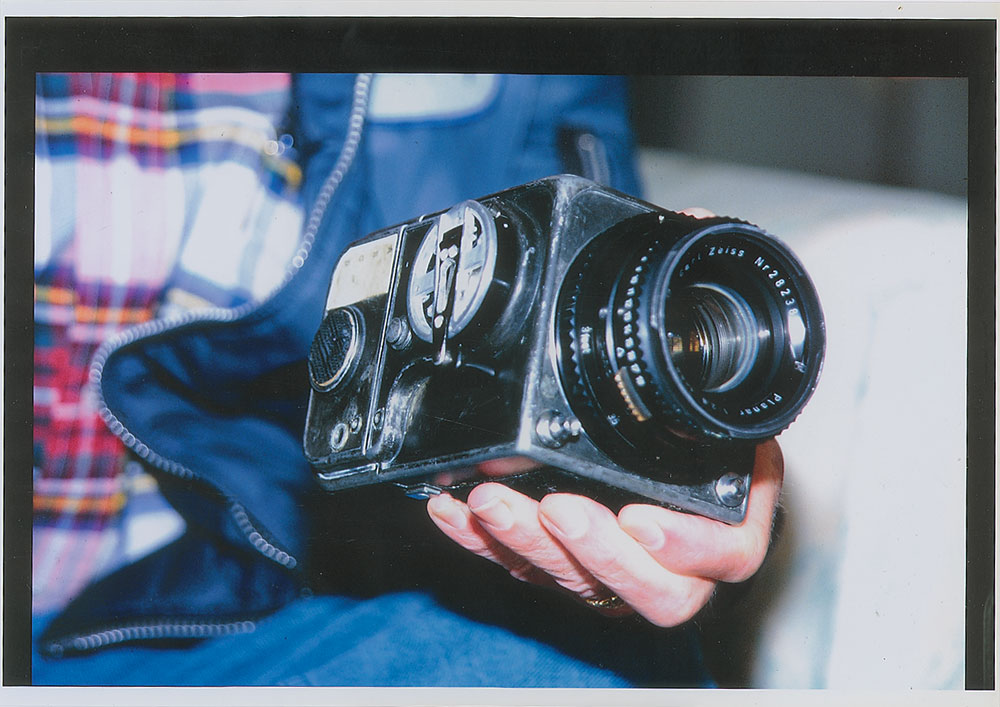 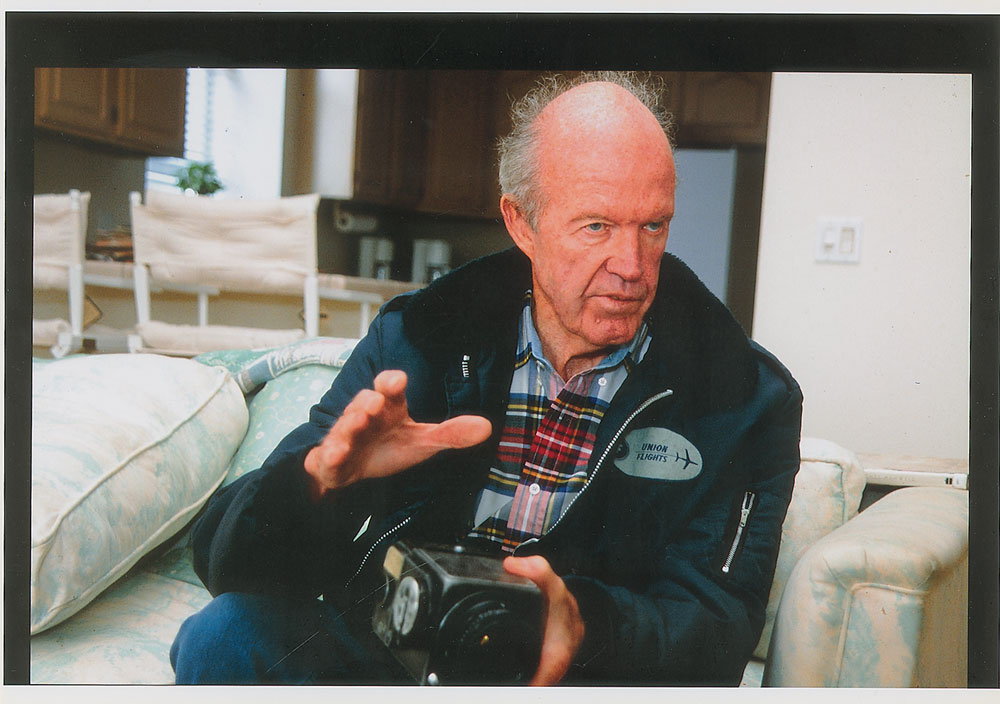 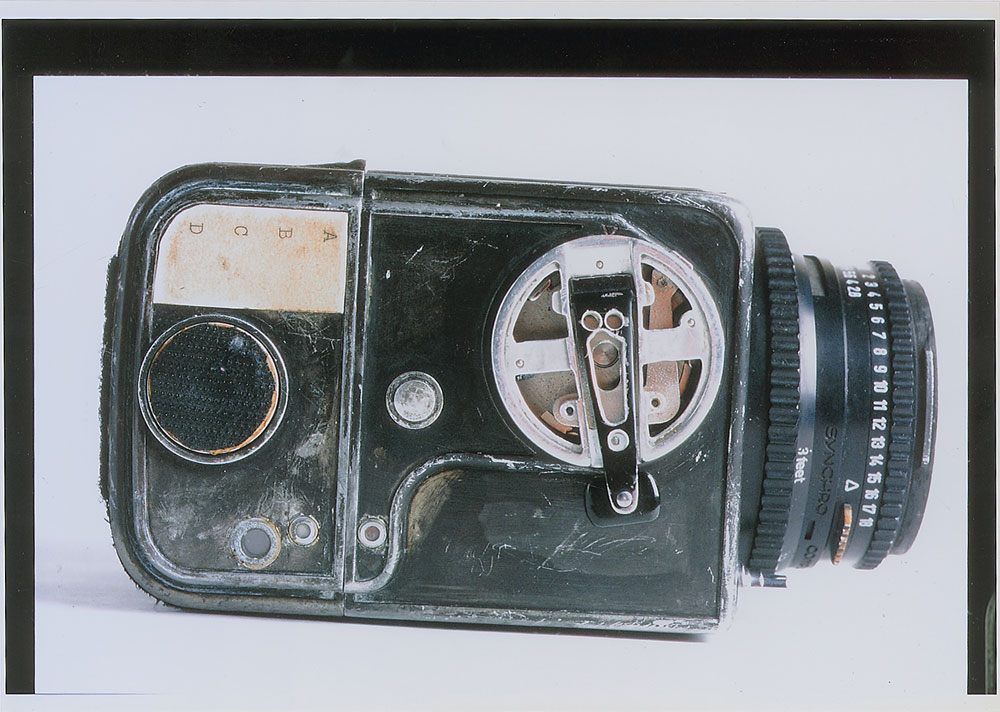 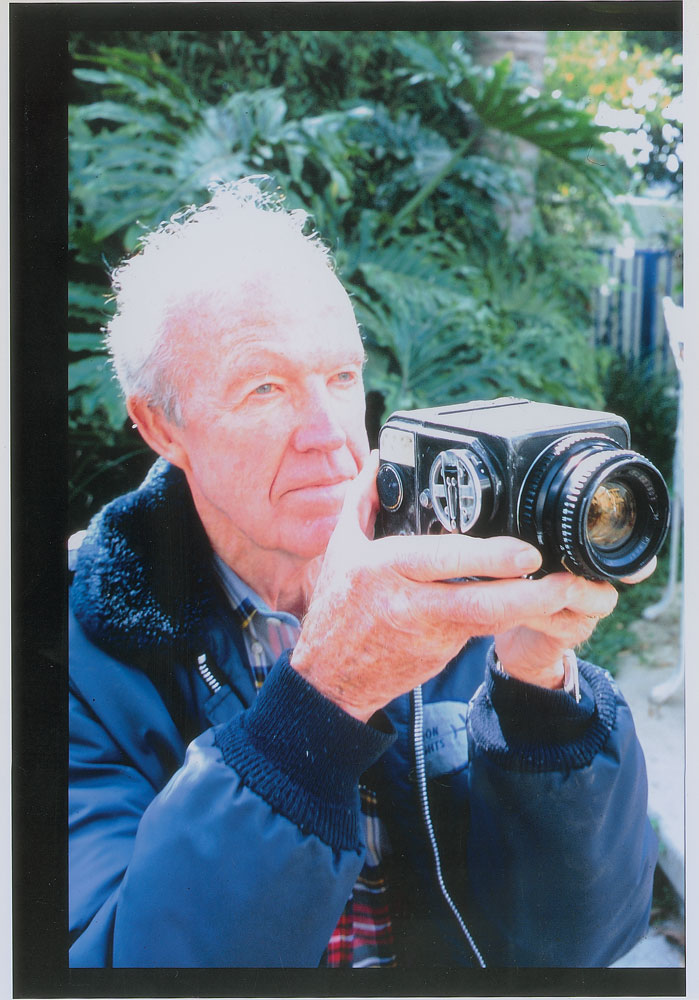 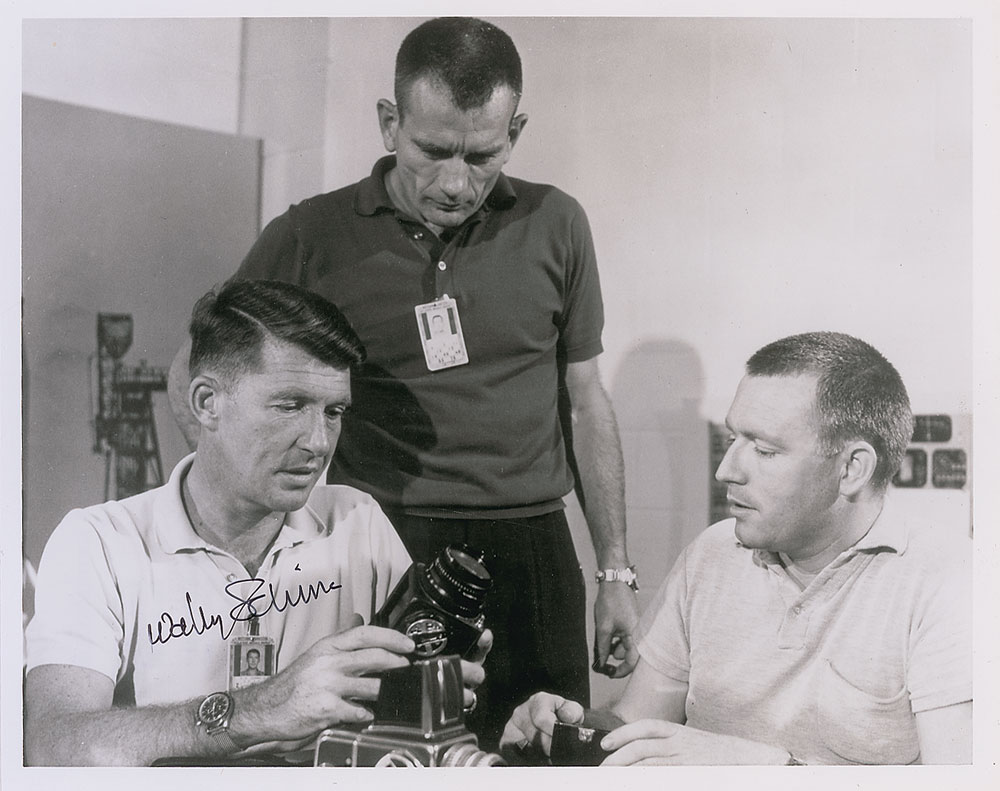 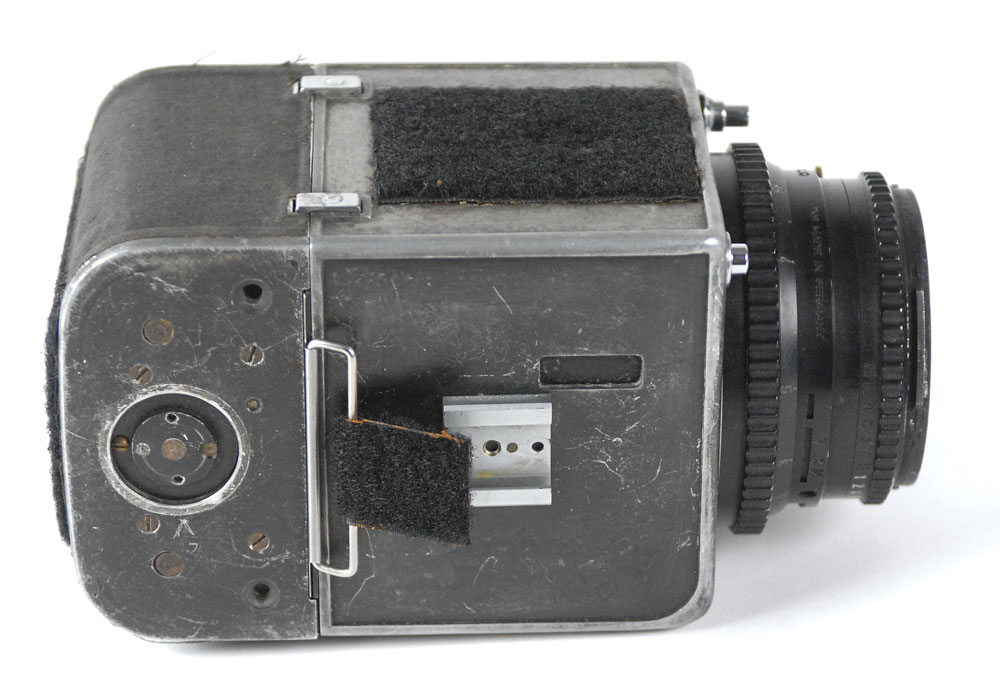 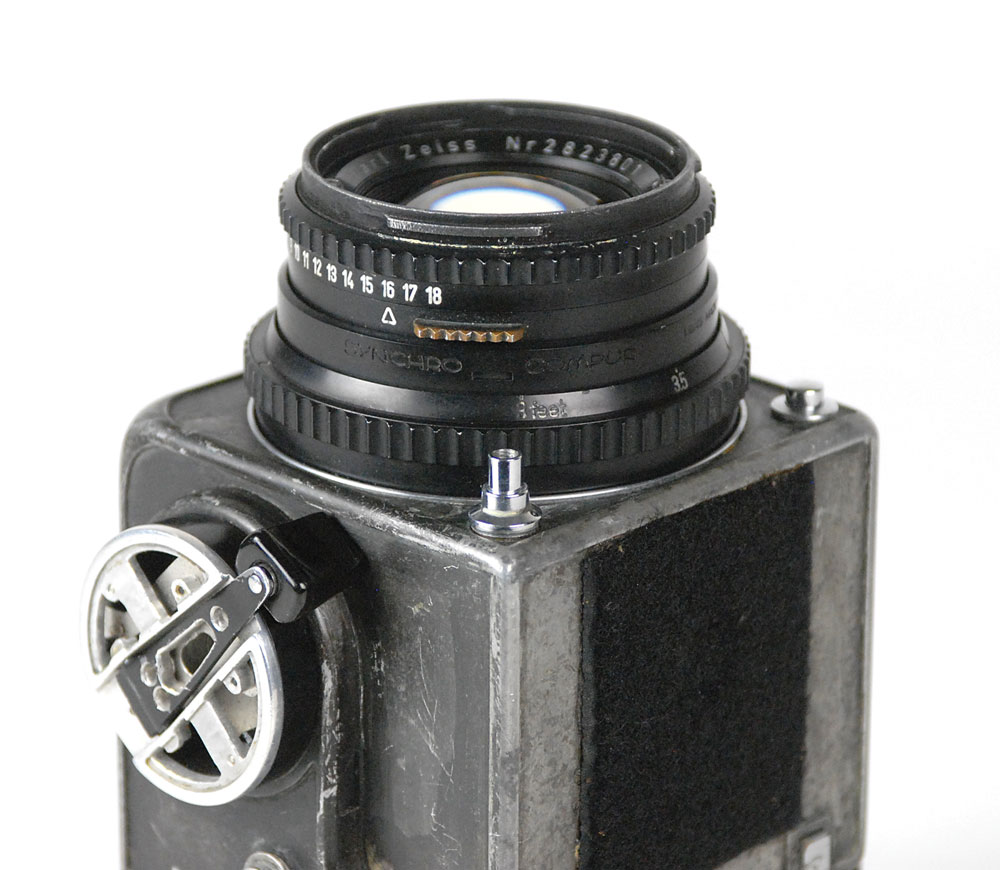 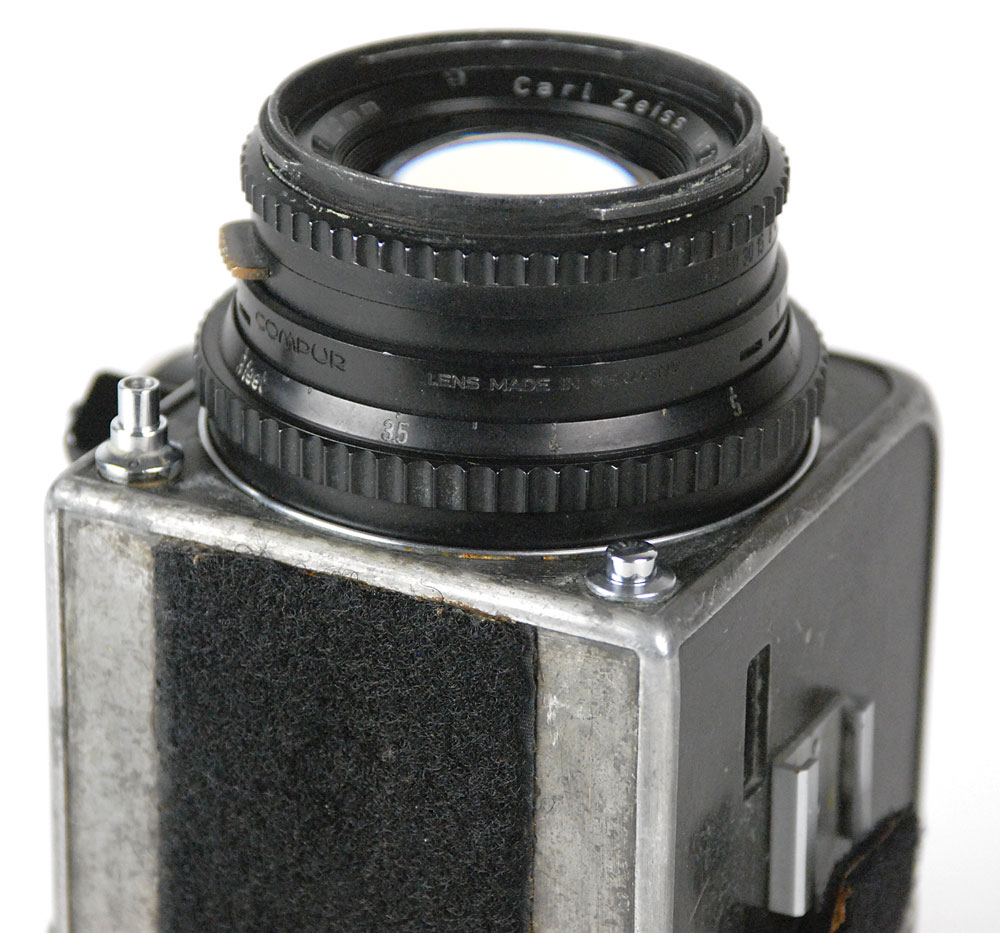 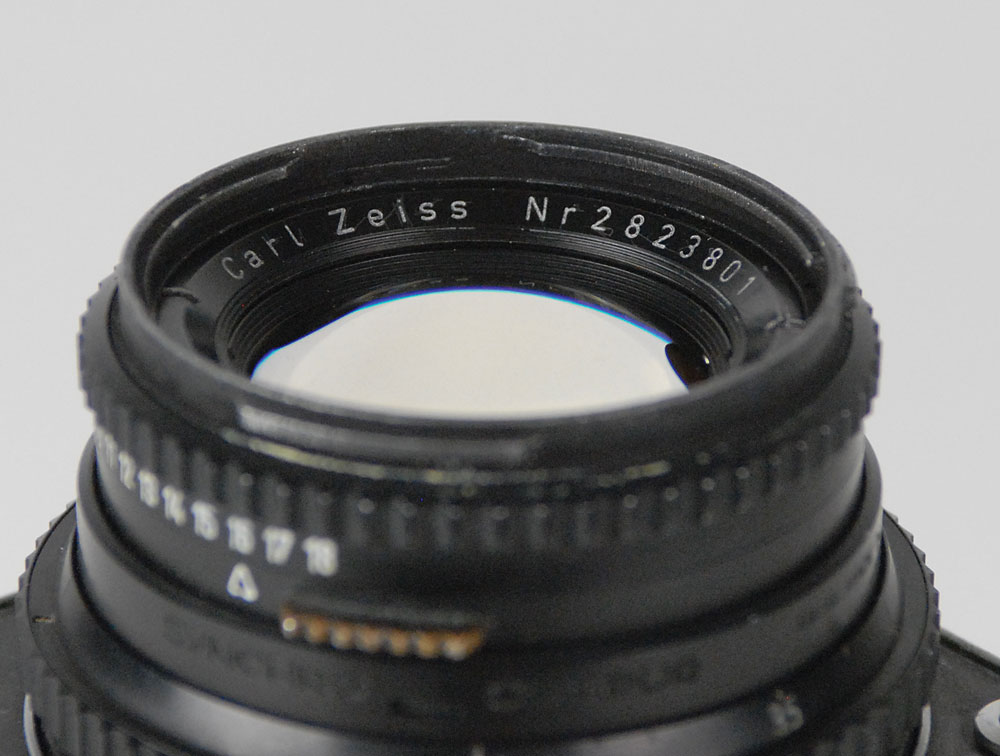 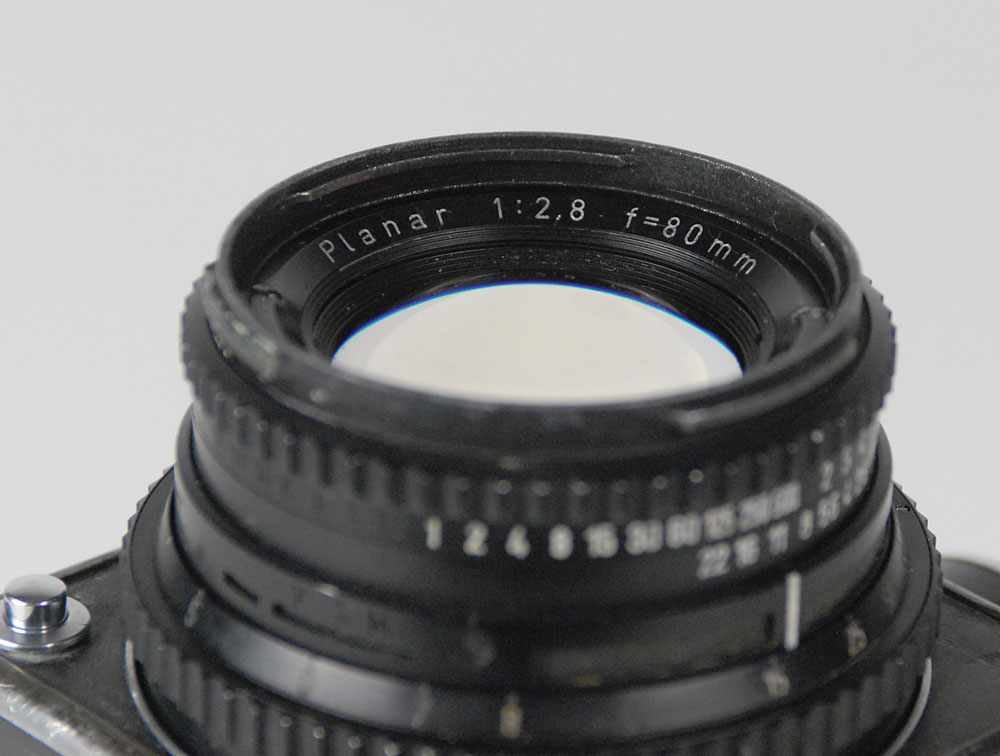 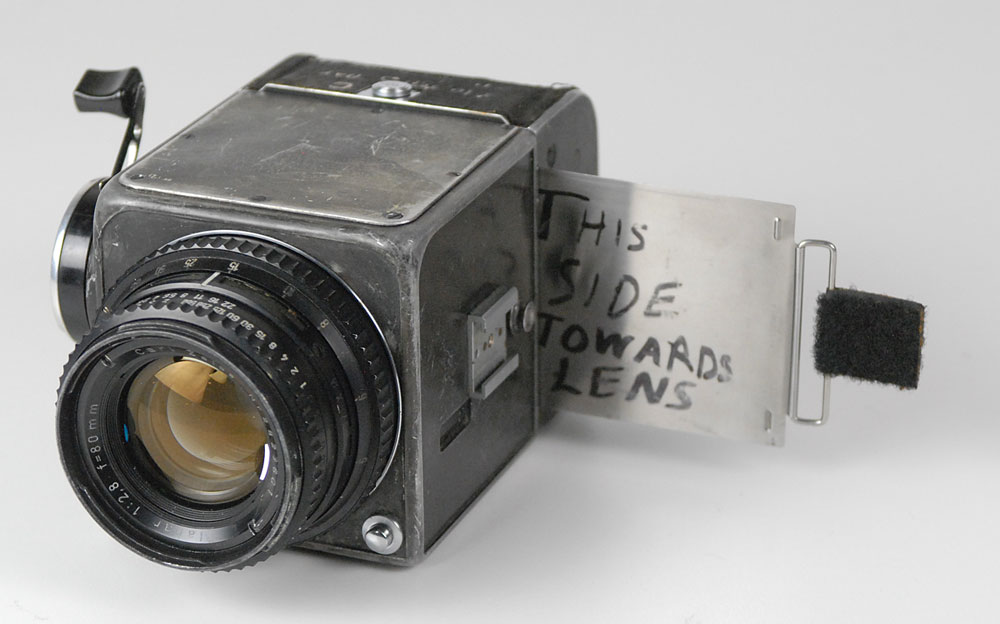 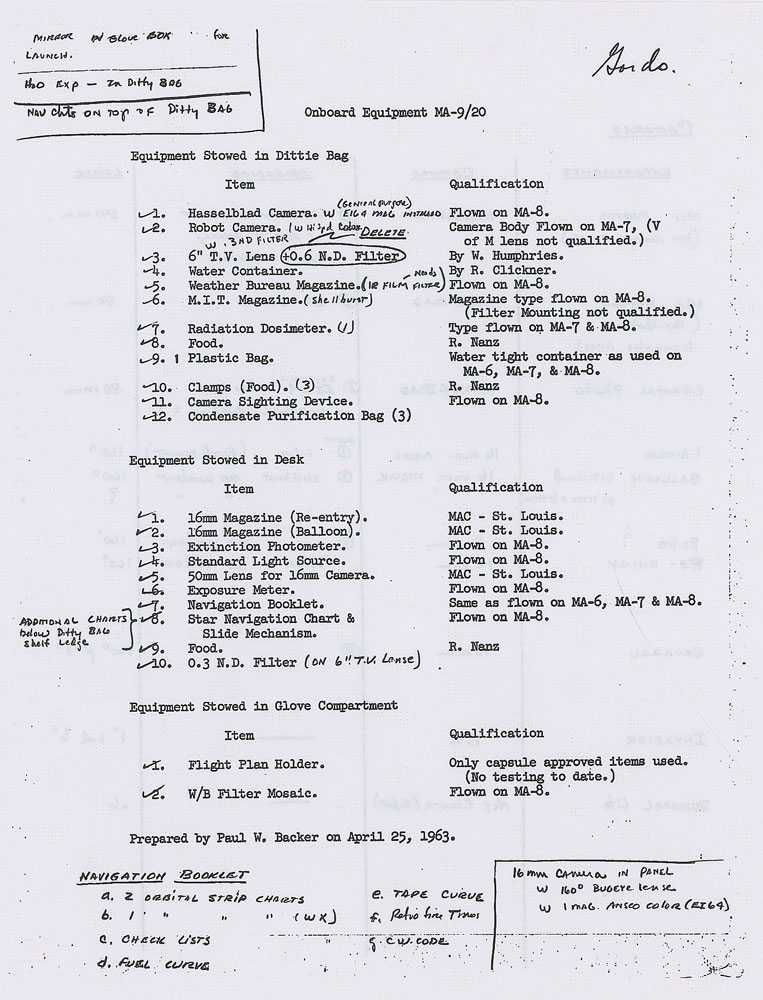 The Hasselblad Camera Body: Flown by Schirra on MA-8 The first Hasselblad in Space, this camera body has been photo confirmed as having been carried into orbit aboard Wally Schirra’s Mercury-Atlas 8 (MA-8) mission and attested to by Gordon Cooper as being used during Mercury-Atlas 9 (MA-9). The body measures 3 x 3.5 x 3.5 and is serial numbered inside the housing on the camera body, below the shutter, “TV 45279.” The original aiming device is not present.

Forensic examination of official NASA photographic evidence confirms this Hasselblad camera body as the one Schirra carried aboard MA-8. Our experts have matched the unique identifying marks.

The First Zeiss Lens in Space: Flown aboard both MA-8 and MA-9 This Zeiss lens—also the first in Space—is twice-Mercury-flown, confirmed by official NASA photo evidence of pre and post-flight pictures, to have been carried aboard both MA-8 by Schirra and MA-9 by Cooper. The inner rim of the 80 mm lens reads, “Carl Zeiss, Nr2823801, Planar 1:2.8 f=80mm.” Its inclusion in the camera assemblage Wally Schirra chose for his Mercury mission resulted in this lens being the first Zeiss to see application on a manned space mission.

Hasselblad—designed and manufactured with watch-maker-like precision—was matched with an equally quality-made lens from a company named Zeiss. Both up-and-coming European precision parts companies, it was a natural fit that the optics brand would partner with Hasselblad—they were each the finest available in their field.

The Film Magazine: Flown by Cooper on MA-9 The attached film magazine, onboard equipment list confirmed as having been flown aboard MA-9 by Gordon Cooper, measures 1.75 x 3.5 x 3.5, and the inner side of the cartridge, obscured when attached to the camera body, is serial numbered, “TV59228, Made in Sweden.” Outside of the magazine exhibits black tape around which is notated in white ink, “C; f16 1/250S Day, f11 1/250S. Sunr. Set.”

This unique photographic exposure inscription, specific to that employed by Cooper’s mission, Mercury-Atlas 9, identifies: the magazine, focal ratio, and exposure information predetermined prior to fight. Magazine is numbered “TV 59228” with “This Side Towards Lens,” written on the film side and a label with typed reference letters on the magazine, to distinguish it from others carried on the flight, “A, B, C, D.” Completely assembled camera, including body, magazine, and lens measures 6.5 x 3.5 x 3.5.

MA-9 Onboard Equipment Lists from Cooper’s personal files Accompanied by four pages of photocopy extracts from two or more of Cooper’s seldom seen MA-9 onboard equipment inventories, each from his personal files, with the camera listed first under the heading, “Equipment Stowed in Dittie Bag,” as “1. Hasselblad Camera…Flown on MA-8 [Cooper has made a handwritten notation, “(General purpose) w E164 Mag installed”] “Qualification, Flown on MA-8.” On the reverse page, Cooper made his handwritten notes regarding the cameras carried aboard MA-9, and the experiments he would perform with them.

Cooper’s MA-9 Hasselblad was utilized to conduct several on-orbit photographic experiments, and general photography including: the Horizon Definition Experiment (to determine the effectiveness with which the Earth’s sunlit limb could be used for navigational sighting during the terminal phase of advanced space missions—the data was used to support MIT Draper Laboratories development of the Apollo guidance and navigation system); Weather photography (to augment meteorological information and provide specific data that would be useful in designing advanced weather satellite systems); and Earth terrain photographs (to aid in building up a catalog of space photographs of various geological features such as folded mountains, fault zones, volcanic fields and to provide topographical information of the major portion of the Earth’s surface.

Exceptional Documentation From Gordon Cooper The first letter, circa 1995, handwritten by Cooper on his personal letterhead, reads: “This Hasselblad camera was flown on MA-9 and used by me to obtain a number of good shots of the earth.” Also included are five exceptional photos of Cooper posing with the camera, taken circa 1995, as well as a photocopy of a NASA photo of Roy Stokes posing with the photographic equipment for Cooper’s mission, and holding the film slide for this very camera.

The second typed letter of authenticity from Cooper, circa 1995, reads in part: “During the mission, I conducted many experiments, including taking numerous photographs of the Earth from inside the spacecraft. I took the photographs with a Hasselblad camera. The serial number on the camera body is TV 45279. I used an 80 mm Carl Zeiss lens, which has serial number 2823801. One of the film magazines I used has serial number TV 59228. The magazine has a dark slide with black velcro attached to the handle. The equipment was stowed aboard the spacecraft in a ‘dittie’ bag.”

The Dawn of a 50-year Affiliation A monumental piece of aeronautical and photographic history—this was the first Hasselblad and Zeiss combination flown in Space—signifying the beginning of an over 50-year-long relationship between NASA and the now iconic camera and lens brands.

Prior to the introduction of the Hasselblad, NASA lacked a defined photography program. It was not until Mercury 7 astronaut Wally Schirra—a known camera enthusiast—sought a precision instrument to accompany him on his MA-8 mission that NASA’s photographic identity began to take shape.

After extensive research and discussion with colleagues, Schirra identified the Hasselblad as his equipment of choice—a burgeoning brand already held in high regard for its superior engineering, craftsmanship, and top-of-the-line quality. As reported in Schirra’s 1998 NASA Oral History [transcript page 12–19] and his autobiography Schirra’s Space [page 80] he purchased the here-offered Hasselblad 500c camera at a Houston photo supply shop in 1962, and brought it back to NASA for mission use preparation.

A decision of the utmost importance, Schirra needed to be confident that this new camera would be reliable and resilient to the rigors of flight. Corroborated in Cooper’s Oral History and details available on Hasselblad’s website, the modifications, performed by the United States Air Force camera laboratory in conjunction with Wally Schirra and fellow astronaut Gordon Cooper included the installation of a 100-exposure film container, an aiming device mounted on the side, and modification of the camera surface, plus the original metal facing was repainted black to minimize reflections.

The groundbreaking initiative Schirra took to locate this Space-worthy camera—a necessity to capture the enthralling views he would encounter during his MA-8 mission—would unknowingly direct the future of NASA photography. As this artifact, and its line of documentation clearly shows, following the camera’s initial success with Schirra on MA-8, Cooper used a Hasselblad [possibly the same body, absolutely the same Zeiss lens] on the next Mercury mission, MA-9.

Documentation stating that Cooper also used a Hasselblad aboard Mercury-Atlas 9 can be found in both the MA-9 Press Kit and Gordon Cooper’s Oral History. Gordo, accompanied by this Zeiss lens (and possibly Hasselblad, as he attested), made history on MA-9 with 22 solo orbits in a mission that lasted over 34 hours—the longest and final flight of the Mercury Program.

Hasselblad and Zeiss had proven themselves and by the start of Project Gemini in 1964, the pair had become NASA’s unofficial camera and lens brands. Celestial photography as their inspiration, Hasselblad went through several model styles throughout the years, inherently growing along with the Space program—beginning with the here-offered Hasselblad 500c, to the SWC flown on Gemini, to the EDC used on Apollo 11, and later the ELS used on Space Shuttle missions. Hasselblad cameras are still in use by NASA today.

It was through its collaboration with NASA, which began with this very camera, that the now world-renowned companies rose to international prominence. An integral aeronautical tool, this dual Mercury-flown and superbly documented camera signifies the dawn of the storied NASA-Hasselblad-Zeiss union.