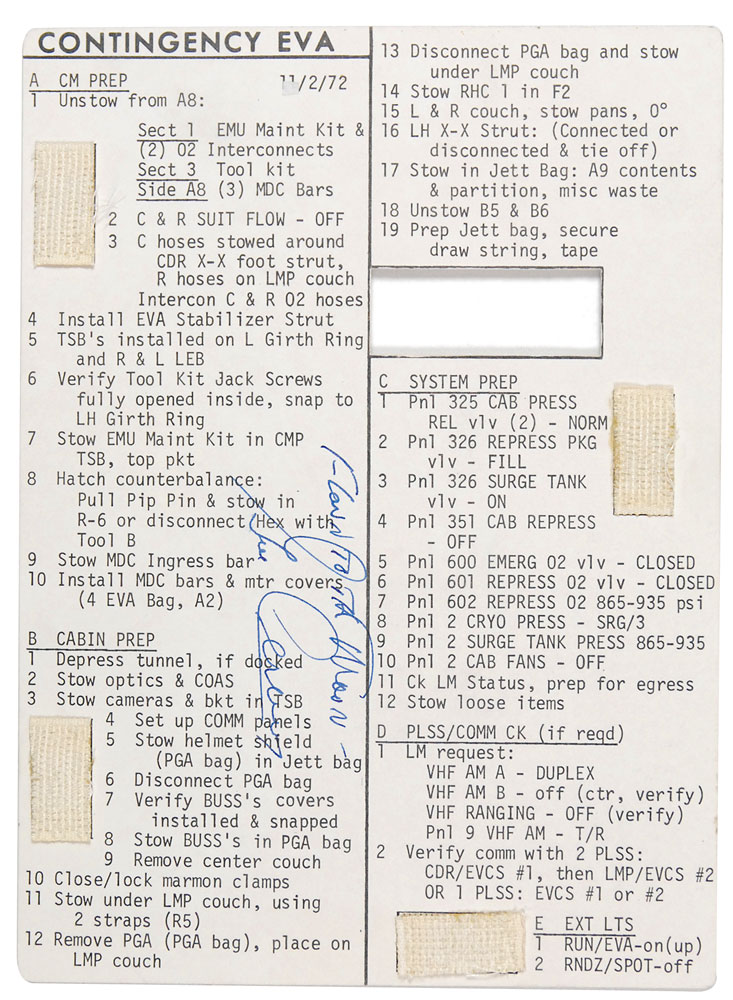 Highly important flown cue card carried to the lunar surface on board the Lunar Module Challenger during the Apollo 17 mission. Double-sided cue card measures 5.75 x 8 and is headed at the top, “Contingency EVA,” has four affixed swatches of Velcro to each side, and contains 15 detailed steps for the two Apollo 17 moonwalkers to move into the Command Module via a space walk should the docking of the Command and Lunar Module fail. Steps on the card include “CM Prep…Install EVA Stabilizer strut,” “Cabin Prep…Remove PGA (PGA bag), place on LMP couch,” “Final Cabin Prep…don helmet, gloves & lock,” “EVT Station Keep…Mnvr as reqd for EVT,” with a pencil notation of “7833.14-.17,” written in pencil by one of the astronauts. The most important step is listed in the upper right of the back of the card, “CM Ingress,” and lists 12 steps for getting the astronauts into the Command Module including: “1. CMP protect RHC. 2. CDR hd 1st face MDC, sit on A9 Purge vlv-LO…6. Secure position, aid LMP. 7.LMP remove xfer bag, push in CM. 8. LMP Ft 1st face MDC, ctr couch Purge vlv-LO…11. CMP close hatch.” Signed vertically on the front in blue ink, “Flown to the Moon, Gene Cernan.” In fine condition.

After lifting off from the lunar surface, the LM and CM would dock while in orbit for the transfer of the two crew members, supplies, and samples from the lunar surface. Should a problem occur during docking, this contingency plan would be called into action with the lunar crew transferring to the Command Module via a space walk. They would exit the lunar module by the ingress/egress hatch and use the EVA handrail to move ‘up’ the Lunar Module to the Command Module, where they would then use the CM's EVA handles to move to the command module's hatch. Fortunately, the docking went smoothly and this plan was not necessary. An extremely detailed procedure for a risky, and potentially life-saving maneuver. Pre-certified Steve Zarelli and RR Auction COA.