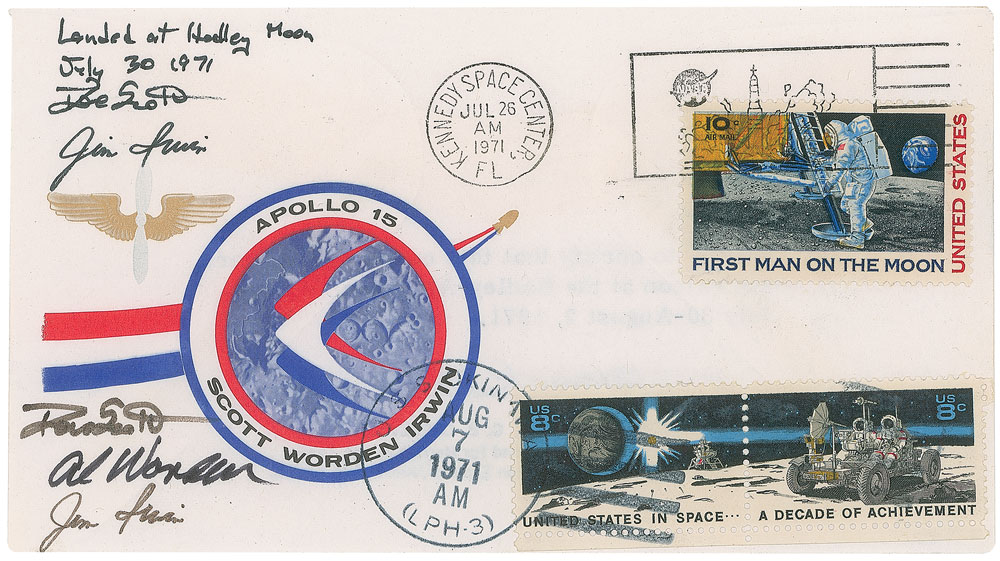 Exceptionally rare Apollo 15 flown Sieger postal cover with a cachet honoring the Apollo 15 mission insignia, signed at the top in black felt tip, “Landed at Hadley Moon, July 30, 1971 Dave Scott,” and “Jim Irwin,” and also signed in felt tip in the lower left corner “Dave Scott,” “Al Worden,” and “Jim Irwin.” On the reverse is the seldom seen typed and notarized inscription that reads: “This is to certify that this cover was onboard the Falcon at the Hadley-Apennine, Moon, July 30–August 2, 1971,” and is notary stamped and signed Mrs. C. B. Carsey. Her notary raised seal is also applied to the cover. Also on the reverse, in the lower left corner, Sieger's name "H.W. Sieger" is stamped then signed by him below a handwritten serial number “44.” In fine condition. Accompanied by the rarely present copy of Die Mondbrief Story, an original 1971 letter from Sieger to a potential client offering a cover for sale, as well as a follow-up letter sending the purchased cover.

Prior to the flight of Apollo 15, Herman E. Sieger, a German stamp dealer cut a deal with the crew to carry 100 covers to the moon in return for $7,000 each, on the condition that they not be sold until after the end of the Apollo program. The crew carried his covers, along with 300 of their own. Despite the agreement not to sell the items, the stamp dealer immediately began offering them to interested parties, leading to a Congressional investigation and a decision by NASA to suspend Scott, Worden, and Irwin from flight duty. This is one of those storied 100 covers, identified by the rarely seen handwritten astronaut inscription on the front and unique notarization on the reverse. While the more often encountered crew member owned and certified covers pop up on the market fairly frequently—commanding around $10,000—these much scarcer Sieger covers are worth twice as much—valued at approximately $20,000. Research indicates that only four of these notorious Sieger covers have come to public sale since the Apollo 15 mission, and none of them were accompanied by all the supplementary materials present with this particularly exceptional example. Pre-certified Steve Zarelli and RR Auction COA.