Important philosophic debate in the development of quantum mechanics 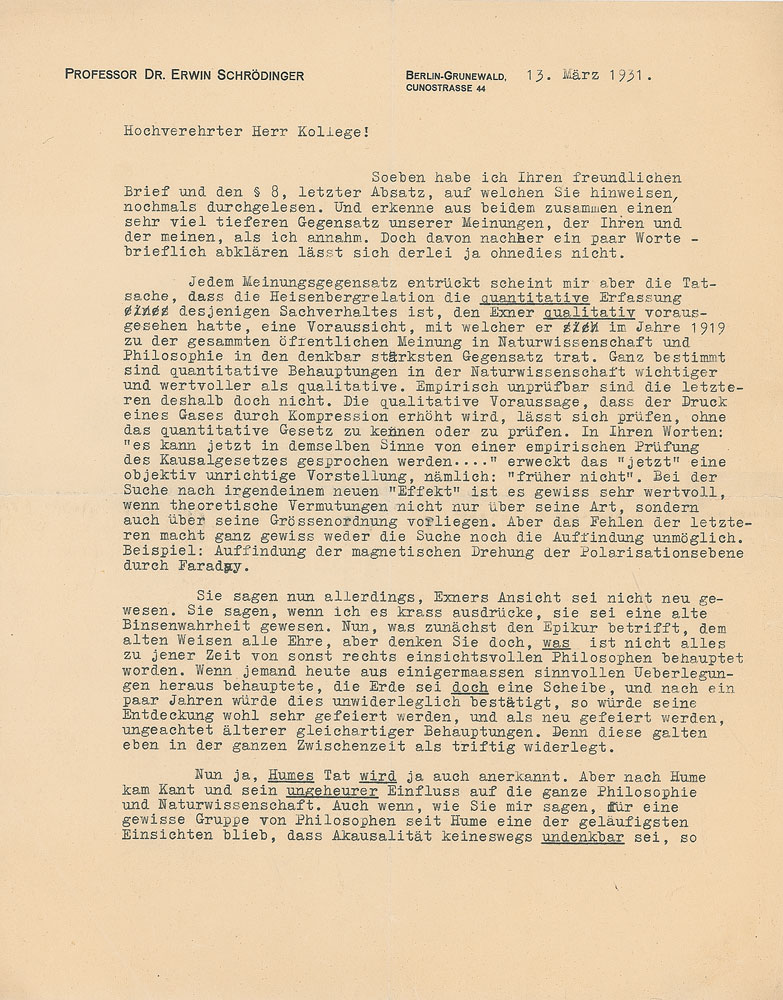 Important philosophic debate in the development of quantum mechanics

Nobel Prize–winning Austrian theoretical physicist (1887–1961) who achieved fame for his contributions to quantum mechanics, known especially for formulating the wave equation as well as the popular ‘Schrodinger’s cat’ paradox. TLS in German, signed “Schrodinger,” three pages, 8.5 x 11, personal letterhead, March 13, 1931. A rich and subtle letter to important philosopher and physicist Moritz Schlick, articulating Schrodinger’s disagreement with Schlick’s recent controversial essay on "Causality in Contemporary Physics." Schrodinger begins by affirming his university mentor, Franz Exner, to have priority over Heisenberg as the first propounder of the Uncertainty Principle: "the Heisenberg [uncertainty] relation is the quantitative assessment of the circumstances that Exner foresaw qualitatively" [in 1919]. He proceeds to argue the merit of qualitative scientific claims, pointing to the recognition now accorded Hume as the first thinker to deny the principle of causality. Schrodinger then turns to Schlick’s particular views, critiquing the idea that the macroscopic regularity of event sequence is likely mirrored in the microscopic (even if such regularity is given only a statistical characterization)—Schrodinger considers this "diametrically opposite" of the views held by himself and Exner. Schrodinger continues to ask how, in the face of entropy, Schlick can hold the view that it is possible to assert causality in a backward direction—this is "quite incomprehensible" to Schrodinger. Schrodinger adds a few ink corrections and emendations throughout, as well as a lengthy passage at the bottom of the second page and a brief postscript. Significant pencil notations have been added in the margins of the final page in an unknown hand, perhaps by Schlick. Central vertical and horizontal folds and tiny edge tears, otherwise fine condition.

The advent of quantum mechanics called into question several basic theories and assumptions about the natural world, and academia sought to rectify these differences between prevailing scientific notions and the findings of their developing field of study. It was generally accepted that cause and effect relationships defined all of nature, as in Newtonian physics. As knowledge of the inner workings of atoms and molecules increased, these empirical definitions appeared to become less valid—thus Exner's proposition that the laws of nature be approached in different manners. He posited that the macroscopic world—the 'real world,' of things and objects, stick and stones—was ruled by law-like causal relations, while the microscopic world—atoms and electrons—was ruled by acausal chance and accident. Schrodinger joined Exner in this suggestion, which was a radical view rejected by the majority of their colleagues who held on to the belief that processes between single atoms obeyed the same deterministic laws of classical mechanics—that the macroscopic mirrored the microscopic. Schrodinger and Exner held that, given the chaotic behavior (entropy) in atomic processes, laws governing microscopic interactions could be explained as expressing the average behavior of an enormously large number of atoms. Schrodinger material is exceedingly rare, and this is an especially lengthy letter with exceptional scientific content. RR Auction COA.