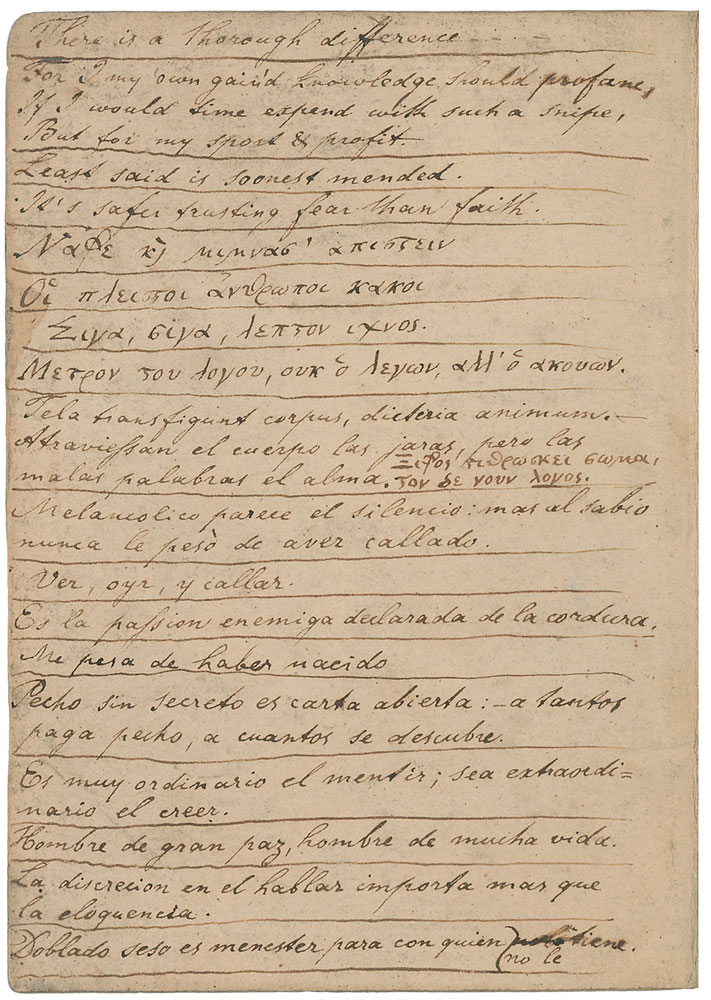 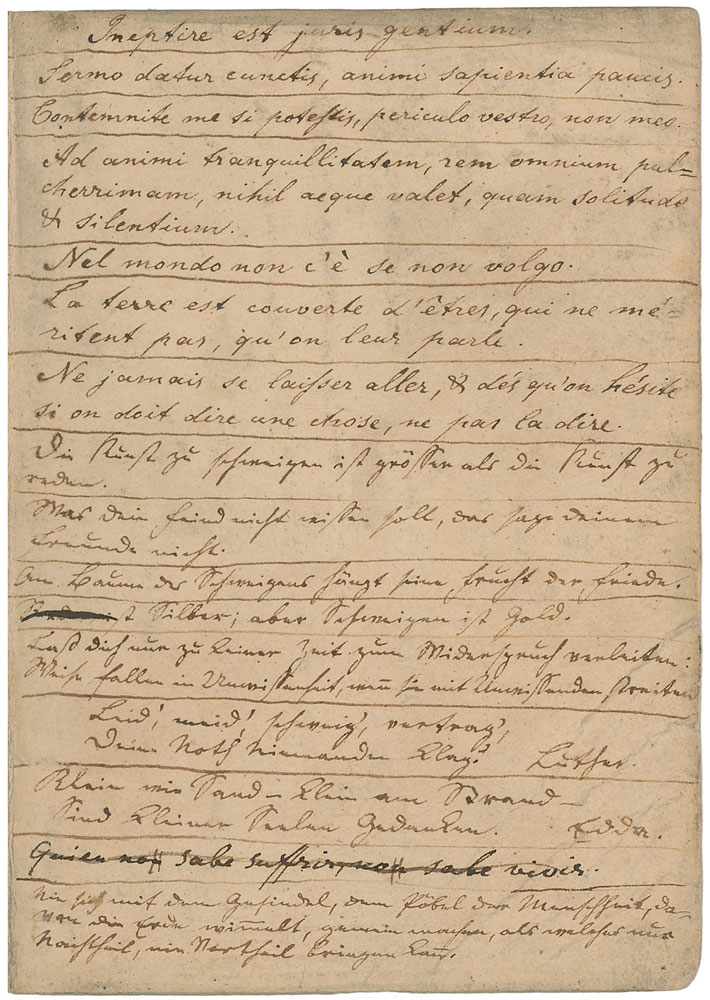 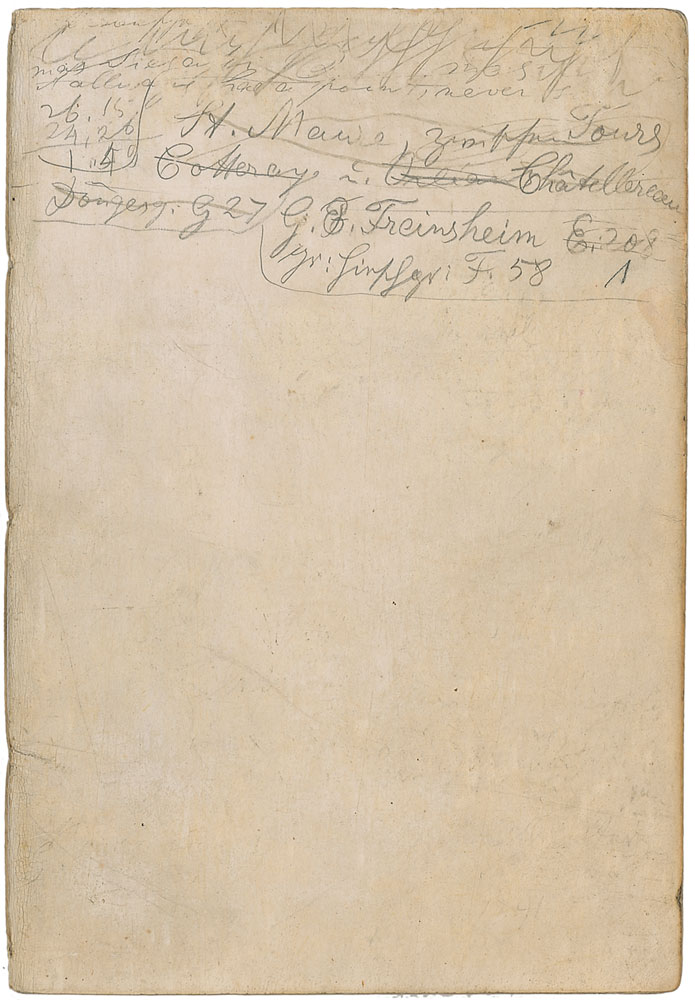 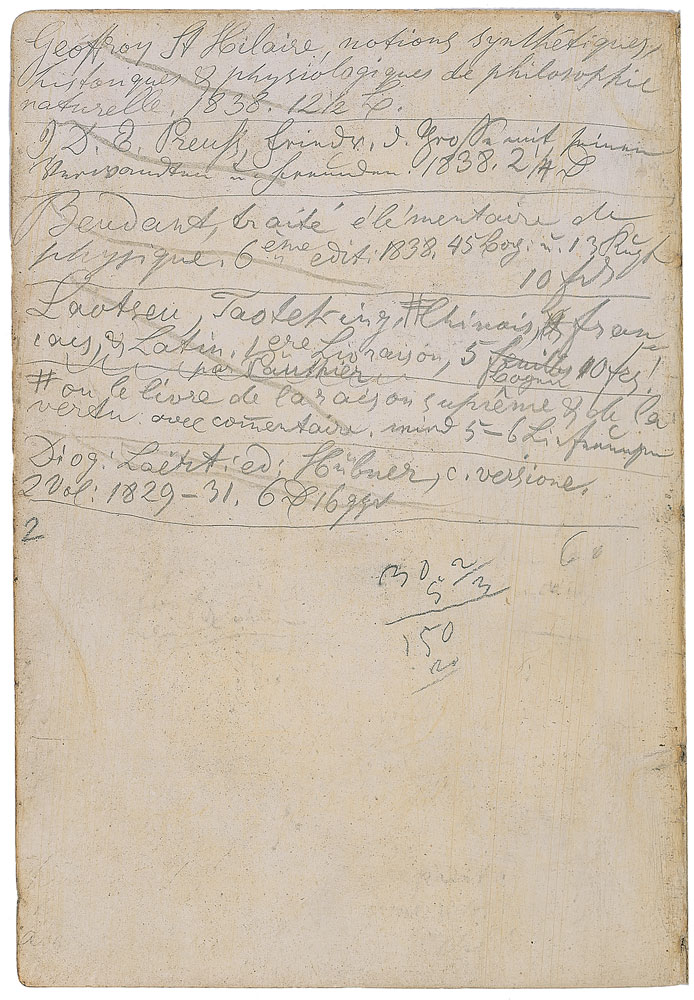 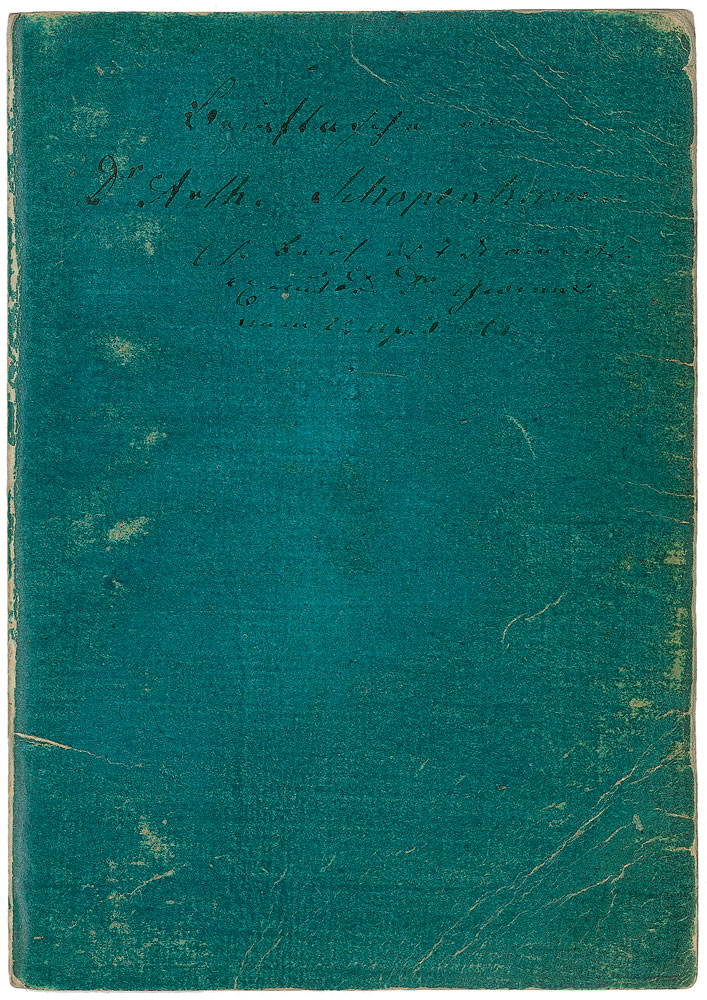 Important and highly influential German philosopher (1788–1860) best known for his often pessimistic works exploring the nature of reality, will, and desire. Schopenhauer’s notebook with ink and pencil entries and notations on both of the inside covers as well as two pages inside. The 16-page notebook measures 3.75 x 5.25, dates from circa 1930, and is labeled in German on the front cover in a previous owner’s hand, "Dr. Arth. Schopenhauer's notebook.” On the inside covers, Schopenhauer has penned (in ink) 36 aphorisms in English, Greek, Latin, Spanish, Italian, French, and German, including: "There is a thorough difference - - - / For I my own gain’d knowledge should profane, / If I would time expend with such a snipe, / But for my sport & profit.” The inside pages bear several brief notations by Schopenhauer, as well as quotes from Luther and the Old Norse Poetic Edda. In very good condition, with inside pages detached from covers, expected handling wear, and some scattered light toning and soiling to inside pages.

The notebook was first published by Hans Zint (‘Eine Brieftasche Schopenhauers’ in Schopenhauer-Jahrbuch XVII, 1930), who writes in his commentary: ‘The inserted notebook sheets were obviously once completely covered by pencil writing—in Schopenhauer's hand, as evidenced by a few still-legible words and letters. However, all entries have been carefully erased with a rubber (the traces of which are equally evident)…The hypothesis that this original text was erased by Schopenhauer himself is corroborated by the fact that pages 1, 2, and 16 contain his later notes penciled over the erased text.” The date has been identified by Arthur Hu¨bscher in his article, ‘Zu Schopenhauers Brieftasche’ (Schopenhauer-Jahrbuch XIX, 1932): ‘The time of the Cogitata's writing (begun in February 1830) is very likely Schopenhauer's last year in Berlin, the time of his preoccupation with the Edda and probably also the time when he penned his notebook aphorisms. Schopenhauer is not known to have quoted the Edda after that.’ Notebook originates from the estate of Schopenhauer's longtime friend Johann August Becker, who had received it from Schopenhauer's executor Wilhelm Gwinner in 1871; the notation on the front cover is most likely in Becker's hand. Many of the philosopher’s aphorisms were published in his last great work, Parerga and Paralipomena, and the volume’s positive reviews propelled Schopenhauer to prominence. A remarkable collection of this popular form of his philosophy. Pre-certified John Reznikoff/PSA/DNA and RR Auction COA.