Betrayed by a friend, Franklin aims to recover his papers stored “out of the Way of any probable March of the Enemies Troops” 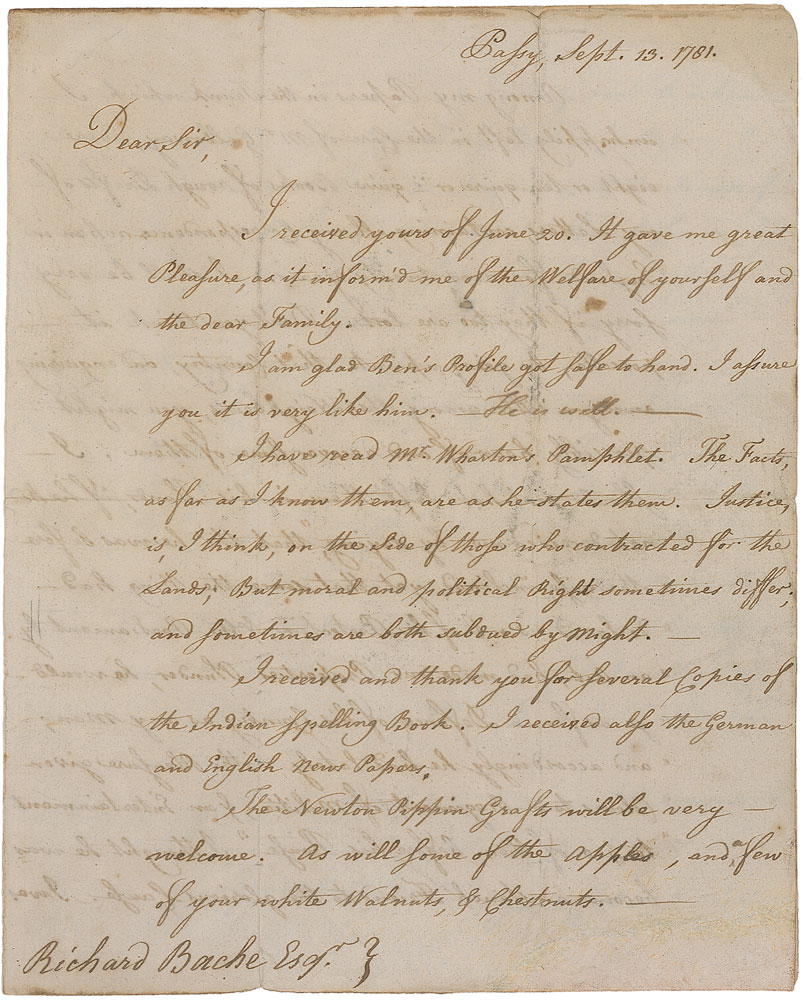 Betrayed by a friend, Franklin aims to recover his papers stored “out of the Way of any probable March of the Enemies Troops”

Revolutionary War–dated LS signed “B. Franklin,” three pages on two adjoining sheets, 7.25 x 9, Passy, France, December 13, 1781. Letter to his son-in-law, Richard Bache. In full: “I received yours of June 20. It gave me great Pleasure, as it inform'd me of the Welfare of yourself and the dear Family. I am glad Ben's Profile got safe to hand. I assure you it is very like him. He is well. I have read Mr. Wharton's Pamphlet. The Facts, as far as I know them, are as he states them. Justice, is, I think, on the Side of those who contracted for the Lands; But moral and political Right sometimes differ; and sometimes are both subdued by Might. I received and thank you for several Copies of the Indian Spelling Book. I received also the German and English News Papers. The Newton Pippin Grafts will be very welcome. As will some of the Apples, and a few of your white Walnuts, & Chest-nuts.

Among my Papers in the Trunk which I unhappily left in the Care of Mr. Galloway, were eight or ten quire or 2 quire Books of rough Drafts of my Letters, containing all my Correspondence when in England, for near twenty Years. I shall be very sorry if they too are lost. Don't you think it possible, by going up into that Country, and enquiring a little among the Neighbours, you might possibly hear of and recover some of them. I should not have left them in his Hands, if he had not deceived me, by saying, ‘that tho' he was before otherwise inclined, yet that since the King had declared us out of his Protection, & the Parliament by an Act, had made our Properties Plunder, he would go as far in Defence of his Country as any Man; and accordingly he had lately with Pleasure given Colours to a Regiment of Militia, & an Entertainment to 400 of them before his House.’ I thought he [had] become a stanch Friend to the glorious Cause. I was mistaken. As he was a Friend of my Son's, to whom in my Will I had left all my Books and Papers, I made him one of my Executors, and put the Trunk of Papers into his Hands imagining them safer in his House (which was out of the Way of any probable March of the Enemies Troops) than in my own. It was very unlucky.

I should be happy to see William. But I think a foreign Education for one of your Sons, sufficient. Give William at my Expence the best our Country can afford. I wish him however to learn French. You have at present Schools & Masters that teach it. Besides other usual Things, let him acquire a little Mathematics, and a perfect knowledge of Accounts. With this he will be able to bustle and make his Way.

My Love to Sally & the Children. I shall soon write to all my Friends. At present I am pinch'd in time, and can only add that I am ever Your affectionate Father.” Intersecting folds with some repaired partial separations, a small professionally repaired area of paper loss to the lower corner of the first page (affecting no writing), and light toning, otherwise fine condition. Originally from the James S. Copley Library, Sotheby’s, 2010.

The pamphlet Franklin refers to in the opening paragraph was a tract regarding the expired Ohio land grant published by Samuel Wharton, who had gone to London to try to have the grant reinstated by King George. However, in the interim some of his correspondence with Franklin in furtherance of the Revolution was discovered and he was forced to flee for his life, meeting Franklin in France where he was serving as US minister to the country. Franklin had entrusted his papers back home to Joseph Galloway, who had been his close political ally and served in the Continental Congress. As war broke out, Galloway moved increasingly toward the Loyalist side before fleeing for Great Britain in 1778; he petitioned to return to Pennsylvania in 1793, but was denied. The last paragraph refers to his grandson, William Franklin Bache, who would have been eight years old. This is an important letter rife with historic associations, and is cited within early biographies of Franklin and in his collected letters. Pre-certified John Reznikoff/PSA/DNA and RR Auction COA.