John makes a case for Yoko’s music: “It’s far out, but don’t let it frighten you” 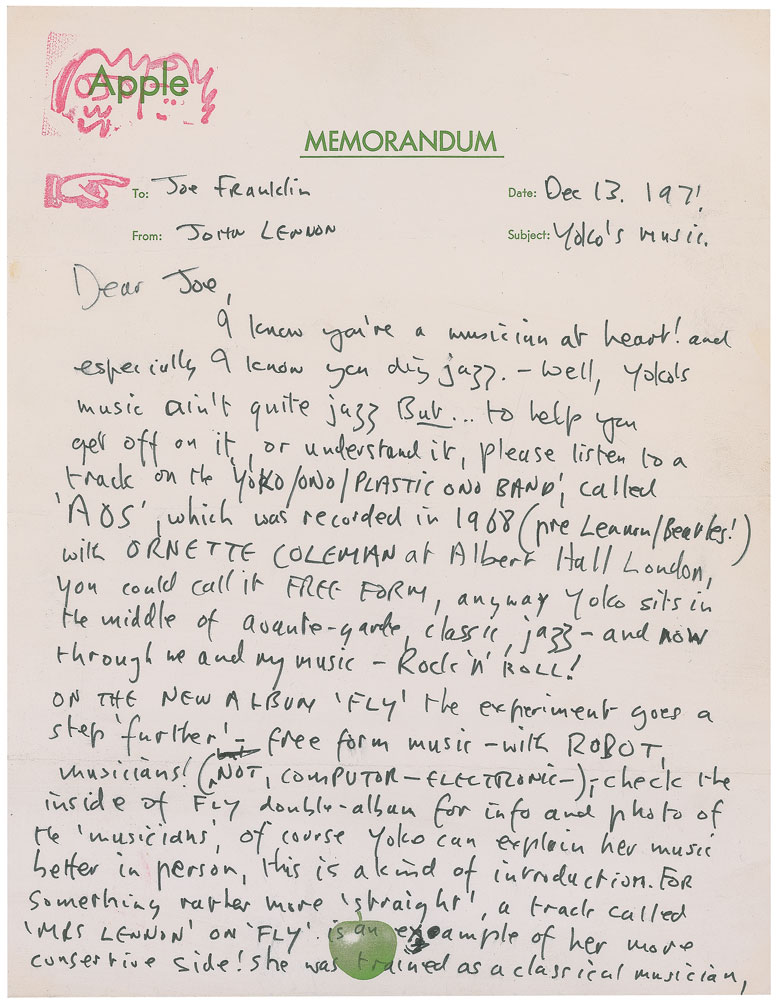 John makes a case for Yoko’s music: “It’s far out, but don’t let it frighten you”

ALS, two pages, 8.5 x 11, Apple memorandum letterhead, December 13, 1971. Lennon writes to durable New York television personality Joe Franklin. In full [Lennon’s spelling and punctuation retained]: “I know you’re a musician at heart! and especially I know you dig jazz.—Well, Yoko’s music ain’t quite jazz But…to help you get off on it, or understand it, please listen to a track on the ‘Yoko/Ono/Plastic Ono Band,’ called ‘AOS,’ which was recorded in 1968 (pre Lennon/Beatles!) with Ornette Coleman at Albert Hall London, you could call it free form, anyway Yoko sits in the middle of avante-garde, classic, jazz—and now through me and my music—rock ’n’ roll! On the new album ‘Fly’ the experiment goes a step ‘further’—free form music—with robot musicians! (not computer—electronic—)—check the inside of Fly double-album for info and photo of the ‘musicians,’ of course Yoko can explain her music better in person, this is a kind of introduction. For something rather more ‘straight,’ a track called ‘Mrs. Lennon’ on ‘Fly’ is an example of her more conservative side! She was trained as a classical musician, and took music composition in Sarah Lawrence College as her major. It’s far out, but don’t let it frighten you. With love….” After signing, Lennon adds his trademark thumbnail sketch of himself and Yoko, as well as a postscript: “The book ‘Grapefruit’ speaks for itself, now in its 4th edition paperback. Yoko calls them, ‘instructions’ to help you through life rather than poetry!” Lennon has also added to each page a red rubber stamp of his own sketch of himself and Yoko, as well as that of an old-fashioned pointing finger. In fine condition.

Accompanied by a letter of authenticity from noted Beatles expert Frank Caiazzo, which reads, in part: “John writes to convince Franklin about Yoko’s abilities and talents, validating her by noting that she worked with Ornette Colman at the Royal Albert Hall in 1968. He also urges Franklin to listen to a song on her ‘Fly’ album…This letter shows how proud John was of Yoko and how he believed in her as a multi-talented artist. The letter has good content, and was more than likely written to provide background and introduction for a proposed Yoko guest spot on the Joe Franklin Show to promote the ‘Fly’ album.” Lennon appeared only on a scant handful of television shows after the break-up of the Beatles, almost all with Ono at his side, however, it does not appear they ever appeared on Franklin’s show. Arguably one of the best Lennon letters ever offered, rife with musical content, as well as Lennon’s passionate advocation for public acceptance of Yoko’s music. Pre-certified Roger Epperson/REAL and RR Auction COA.