“All of this week we are going to be evaluating the proposals for the Apollo space ship. It’s the one we expect to fly to the moon and back” 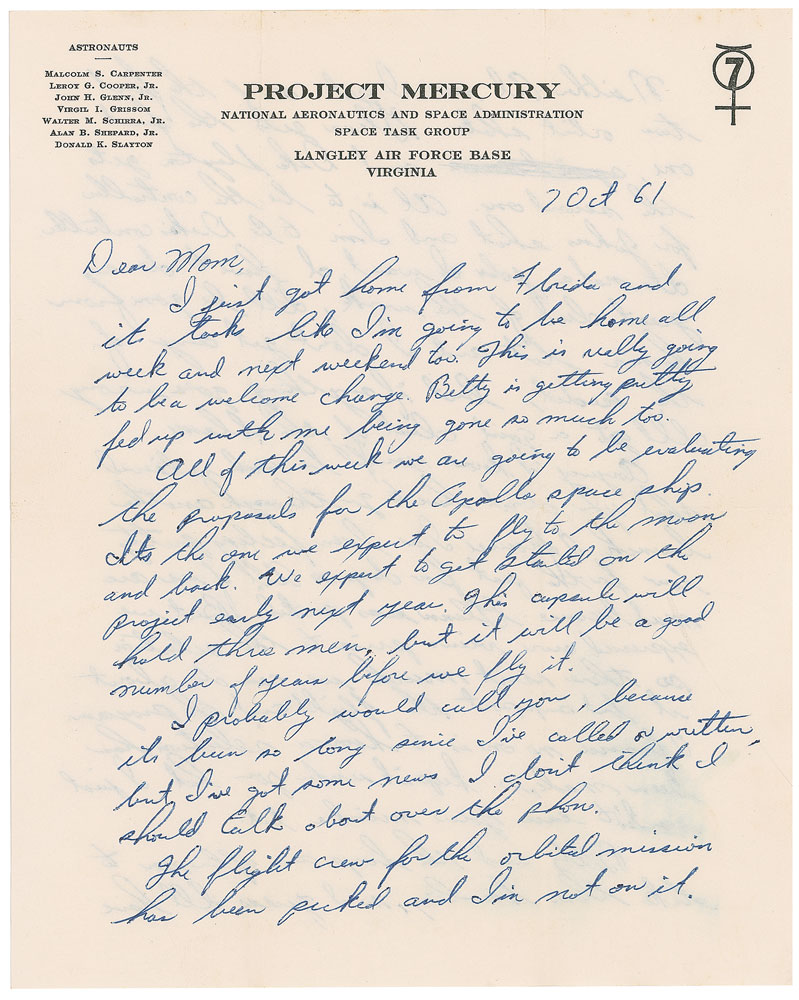 “All of this week we are going to be evaluating the proposals for the Apollo space ship. It’s the one we expect to fly to the moon and back”

ALS signed “Virgil,” two pages both sides, 7.75 x 10, Project Mercury letterhead, October 7, 1961. Letter to his mother. In full: “I just got home from Florida and it looks like I’m going to be home all week and next weekend too. This is really going to be a welcome change. Betty is getting pretty fed up with me being gone so much too.

All of this week we are going to be evaluating the proposals for the Apollo space ship. It’s the one we expect to fly to the moon and back. We expect to get started on the project early next year. This capsule will hold three men, but it will be a good number of years before we fly it.

I probably would call you, because it’s been so long since I’ve called or written, but I’ve got some news I don’t think I should talk about over the phone.

The flight crew for the orbital mission has been picked and I’m not on it. Neither Al nor I get one of the first two orbital shots. Glenn gets the first one and Deke Slayton gets the second one. Al is to be the controller for John’s shot and I’m going to be Deke’s controller. It’s not a job I want, I have to do a great deal of work, I’ll be gone from home a lot and I don’t get any of the credit, but if anything goes wrong I’ll get a good deal of the blame.

Anyway I know you’ll be relieved that you don’t have to go through another launch. Of course I’ve been feeling pretty low for the past few days. All of us are mad because Glenn was picked. But we expressed our views prior to the selection so there isn’t much we can do about it but support the flight and the program. Of course no one is to know a selection has been made, so keep it under your hat. I just wanted to ease your mind a bit.

Betty and the boys are after me to take them bowling, so I guess I’ll have to finish this after I get back.

This is the next day but maybe I can get this done while the ball game is going on. The hurricane didn’t really get to us over here at all. It looked like it was going to hit us pretty strong for a while. We were all prepared for it though!

It looks like we will move to Houston sometime next year. Probably not until after school is out. We have our house up for sale though and if it sells right away I guess Betty & the boys will head on to Houston. I’m not looking forward to going to Texas again but I guess it’s as good as Virginia. I’ve been loaned to NASA by the Air Force for another three years and I’ll probably [be] with them longer than that.

Did Dad make the trip to Chicago? I think it would have been a nice trip for him. Betty and the other girls are going to Seattle, Washington to help dedicate a building or something for the world’s fair that will be held out there next year. It will be a good trip for her. I’ll be glad for her to get away from the house a while. We didn’t get any vacation this year. In fact I lost 30 days of vacation.

Everyone is wanting to go bowling again so I guess I’d better close and get ready. Betty bowls on a ladies team one morning each week and seems to like it real well. She beat me one game last night, Scotty almost beat me too. Everyone is OK here. The boys seem to be doing a little better in school but we never know until the grades come out.” At the conclusion are several handwritten notations, presumably by Grissom’s mother which reads, “Virgil was at Bermuda for flight. Glenn’s flight Feb. 20, 1962. Time of flight left 9.47 a.m. His flight length of flight 4 hrs 56 mi. 26 sec. Picked up on deck of USS Noah at 3 o’clock 4 mi. and put on USS Randolph for trip to Island.” In fine condition, with intersecting mailing folds, and a few moisture spots to reverse of first page, not affecting legibility. Accompanied by the original mailing envelope addressed in Grissom’s hand.

Having missed the opportunity to be the first American in space, Gus Grissom hoped that he would be selected for the first US orbital mission in the fall of 1961; but with the controversial hatch blow of Liberty Bell 7 still fresh in everyone’s minds, the position was given to NASA’s ‘golden boy,’ John Glenn. Undeservingly thrown into the spotlight to defend himself against accusations that the disastrous Liberty Bell splashdown was his fault, Grissom viewed his new appointment as controller for the second orbital mission, to be piloted by Deke Slayton, with apprehension: “It’s not a job I want, I have to do a great deal of work…and I don’t get any of the credit, but if anything goes wrong I’ll get a good deal of the blame.”

The Mercury-Atlas 6 (Friendship 7) launch finally took place on February 20, 1962, successfully orbiting three times and splashing down safely, making Glenn the first American astronaut to orbit the earth. Despite his disappointment, Grissom shared in the country’s enthusiasm for the mission and remained devoted to his work. Expressing great excitement about the Apollo plans in the works—“It’s the one we expect to fly to the moon and back”—he held on to the hope that even bigger opportunities were yet to come. This incredible letter offers a rare glimpse into the inner circle of the Mercury 7—where a group of highly dedicated men competed for the coveted mission assignments that would become historical firsts. With his life cut short in the Apollo 1 tragedy, handwritten material from Grissom is phenomenally scarce; this letter to his mother, with mentions of several fellow Mercury astronauts, the first American orbital flight, and plans for the upcoming Apollo project, is the first Grissom ALS we have ever offered.