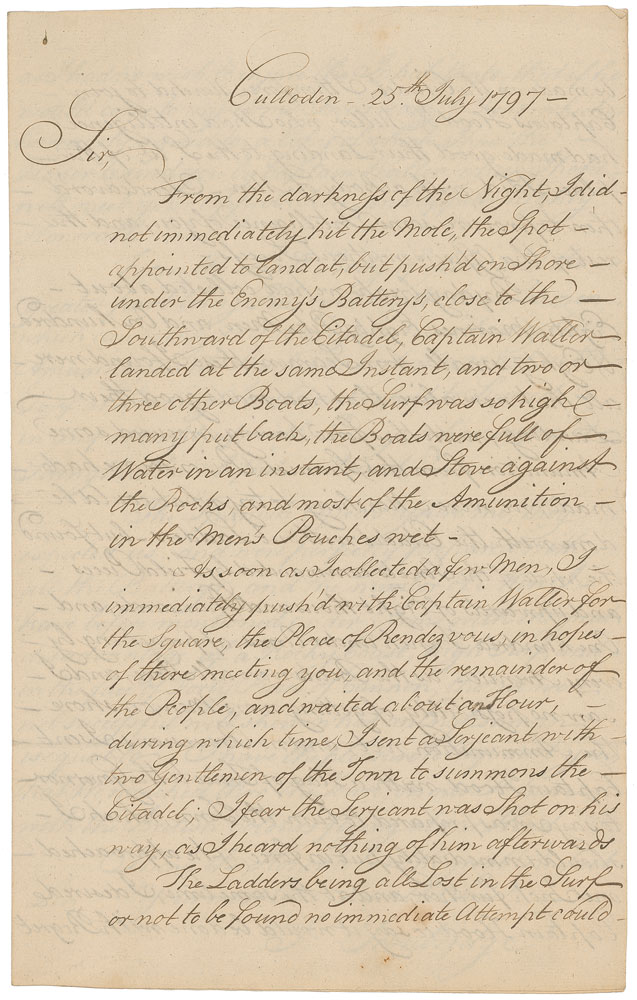 LS endorsed at the conclusion, “Copy Horatio Nelson,” four pages on two adjoining sheets, 8 x 12.5, July 25, 1797. An important manuscript copy of Captain Thomas Troubridge’s account describing his attack on Santa Cruz, dated on board the HMS Culloden on the day of the battle. In part: “From the darkness of the Night, I did not immediately hit the mole, the Spot appointed to land, but push’d on Shore under the Enemy’s Battery’s, close to the Southward of the Citadel…I immediately push’d with Captain Waller for the Square, the Place of Rendezvous, in hopes of there meeting you…The Ladders being all Lost in the Surf or not to be found no immediate attempt could be made on the Citadel…I endeavour’d then to procure some Intelligence of you, and the rest of the officers without Success…By day break we had collected about Eighty marines, Eighty Pike Men, and One hundred & Eighty small Arm Seamen, these I found were all that were alive, that had made good their Landing…having procured some Amunition from the Spanish Prisoners we had made, we were Marching to try what could be done with the Citadel without Ladders…but found…upwards of Eight thousand Spaniards, and One hundred French under Arms, approaching by every Avenue; as the boats were all Stove, and I saw no possibility of getting more men on shore, the Ammunition wet, and no Provisions, I sent Captain Hood with a Flag of Truce to the Governor, to say I was prepared to burn the Town…at the same time, I desired Captain Hood to say, it would be done with Regret, as I had no wish to injure the Inhabitants, that if he would come to my terms, I was ready to Treat, which he readily agreed to…From the small Body of Men, and the greater part being Pike and small Arm Seamen, which can be only called irregulars, with very little Ammunition in the Pouches but what was wet in the Surf at Landing, I could not expect to Succeed in any attempt upon the Enemy, whose superior Strength I have before mentioned. The Spanish officers assure me, they expected us, and were perfectly prepared with all the Battery's, and the number of Men I have before mentioned under Arms with the great disadvantages of a Rocky Coast, high Surf, and in the face of Forty Pieces of Cannon, tho' we were not successful will shew what an Englishman is equal to. I have the pleasure to acquaint you, that We marched thro' the Town, on our Return, with the British Colours flying at our Head." Nelson signed at the conclusion, now forced to use his left hand, to certify it as an official copy to retain for his own records. Troubridge's original report is now in the Royal Navy College at Greenwich, England. In fine condition.

Admiral John Jervis ordered Nelson's squadron to capture the Spanish port city of Santa Cruz de Tenerife in the Canary Islands in an effort to incapacitate the larger Spanish navy. Nelson's assault plan began with Troubridge landing at Valle Seco beach under cover of night, stealthily disembarking to take the Spanish by surprise and capture their coastal batteries. Meanwhile, a British gunboat would attack from the sea, and Nelson would sweep in to capture Spanish merchant vessels and their cargo. The plan came to a halt during the first maneuver, as Troubridge's report describes—though he managed to land, their cover had been blown and strong currents prevented a safe arrival on the shore. Angered by this failure, Nelson decided to personally oversee the next attack which would be against the city itself. Anticipating this move, the Spanish commander Antonio Gutiérrez de Otero concentrated his forces in the port defenses which were centered on San Cristobal castle. Nelson and his attack force set out to move against the castle but again were spotted by a Spanish frigate and the harbor batteries opened fire. Under duress, the British ships struggled to reach the shore and one boat sunk in the crossfire. Just as Nelson reached land, he famously was hit in the right arm and taken back to his flagship, the HMS Theseus, where a surgeon amputated the injured limb. Within 30 minutes of the amputation, Nelson was again issuing orders and commanding his troops. Ultimately, the British forces failed to advance and Troubridge became trapped, thus his request for a truce. This historically important document must have been one of the first signed by Nelson with his left hand, just after losing his right arm in the chaos of battle, and is exceptionally desirable in that it was his own personal copy of the report. This piece is both historically important and holds great significance in the context of Nelson's biography and heroic legacy.