Fantastic archive highlighted by seven war-dated letters, including those written on his birthday and two days before D-Day 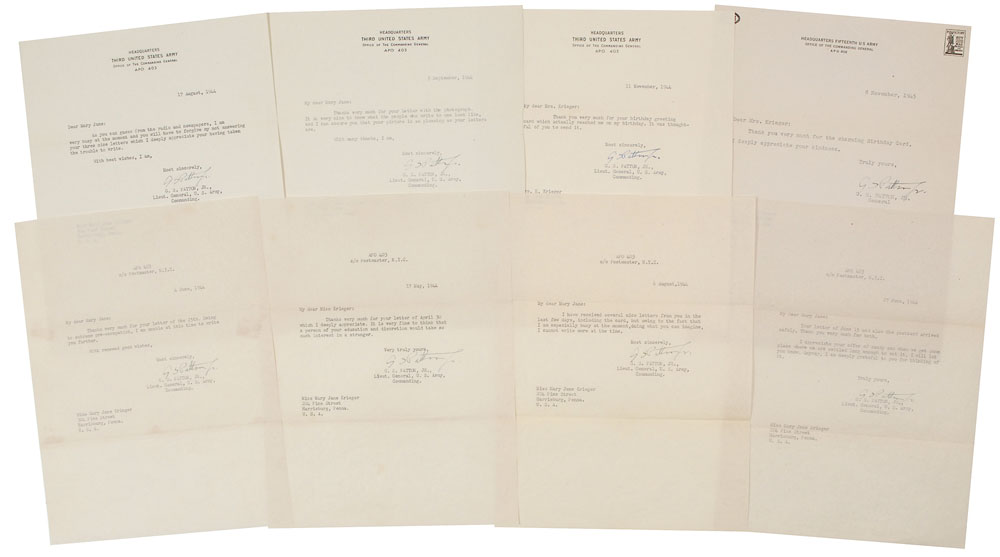 Fantastic archive highlighted by seven war-dated letters, including those written on his birthday and two days before D-Day

Remembered as the hard-driving, unrelenting military hero who led head-first through World War II’s most important operations—the Invasion of Sicily, the rapid drive across France following the Invasion of Normandy, the relief of Bastogne during the Battle of the Bulge—General Patton’s steady correspondence with a young Harrisburg, Pennsylvania, woman by the name of Mary Jane Krieger reveal a much kinder side of the general. These letters, most affectionately addressed to “My dear Mary Jane,” offer kind remarks of appreciation for packages sent and apologies for delayed correspondence, many of them being sent during his busiest times during the war. Patton wrote to her until his final days—one of the last four letters he ever wrote was to thank her for a book of poems she sent as a Christmas gift. Wonderful archive of eight TLSs from Patton to Krieger, each signed “G. S. Patton, Jr.,” one page, 8 x 10.5, dated between May 17, 1944, and November 8. 1945, with all but one being war-dated. Most contain general content, briefly responding to Krieger’s letters and thank her for her support. In his letter of June 4, 1944—just two days before D-Day—he writes, in part: “Owing to extreme pre-occupation, I am unable at this time to write you further.” Although Patton did not directly participate in the D-Day landings at Normandy, he served as a decoy and went to England, drawing Axis defenses to the north of France to create weakness in the southern regions where the attack was actually planned. His letter of June 27, in part: “I appreciate your offer of candy and when we get some place where we are settled long enough to eat it, I will let you know.” At this time, Patton and his Third US Army was moving from England to France, where they would gain much ground in July, hence the uncertainty of his exact whereabouts. His next letter, sent on August 6, came as they rapidly advanced through France. In part: “Owing to the fact that I am especially busy at the moment, doing what you can imagine, I cannot write more at the time.” Advancing first into Brittany and then swinging eastward, Patton’s Third Army traveled over 250 miles across France. It crossed the Seine River southeast of Paris in late August. In a later letter, sent on November 11, 1944, Patton writes, “Thank you very much for your birthday greeting card which actually reached me on my birthday. It was thoughtful of you to send it.” This letter was actually sent on his birthday which, interestingly, shares its November 11 date with Armistice Day. Also present is Krieger’s scrapbook and her handwritten draft of a telegram she sent to Patton after learning of his car accident. Her telegram is dated December 14, 1945, six days after his car accident in Germany, and reads simply, “My very best wishes.” Unfortunately, Patton would pass away from his wounds on December 21. Kriger’s large scrapbook contains many affixed photos and newspaper clippings related to Patton, most importantly including Patton’s 2.25″ diameter red, white, and blue Third US Army cloth patch most assuredly sent to her by the general. Letters in overall fine condition. An outstanding chronicle of a well-known correspondence, spanning some of the most critical days of the war. RR Auction COA.