Exceptionally rare 1543 manuscript: “Believe and you shall be saved” 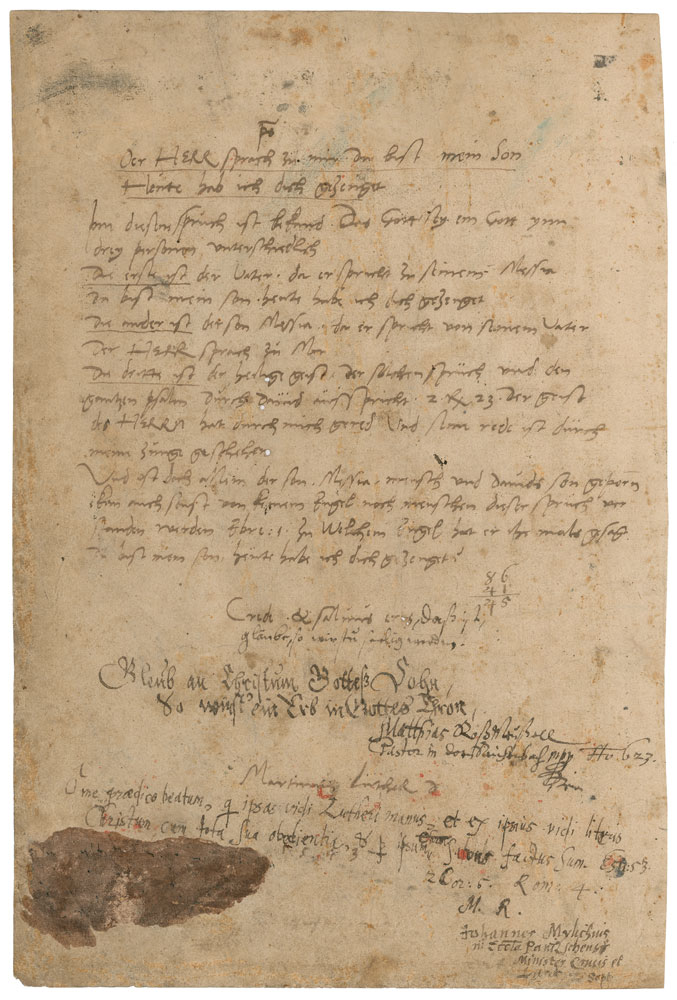 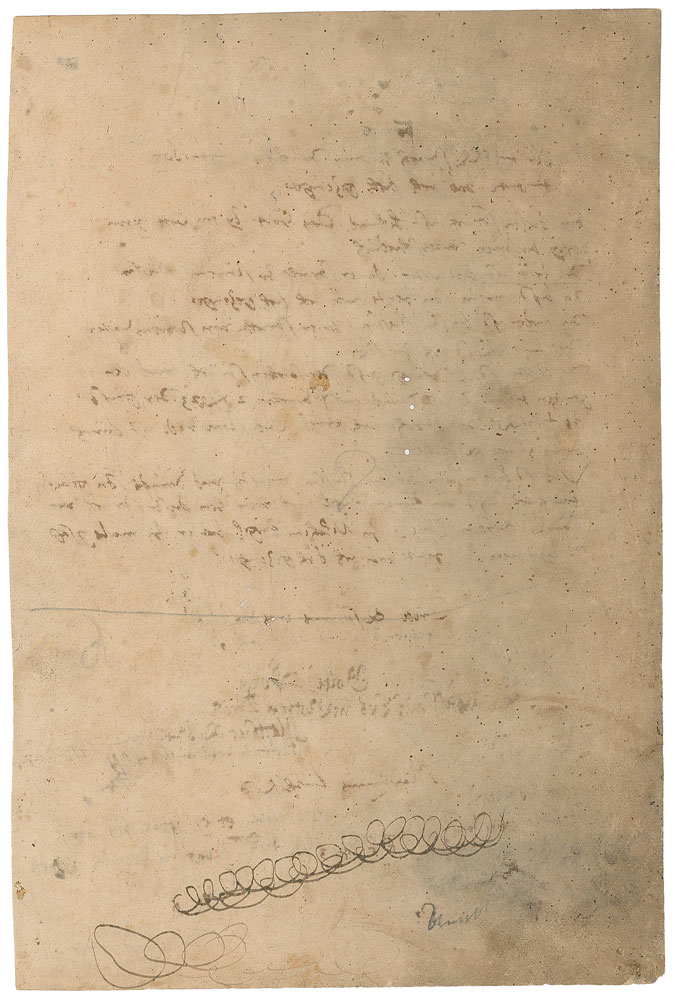 Exceptionally rare 1543 manuscript: “Believe and you shall be saved”

Remarkable autograph manuscript in German, signed in Latin, “Crede et salvus eris, Martinus Luther D,” [translated: “Believe and you shall be saved”], one page, 9 x 13.25, dated 1543. Luther pens 17 lines to a fellow pastor, originally as a dedication on the front flyleaf of a 1541 Wittenberg Bible, beginning with the seventh verse of Psalm II. In part (translated): “The Lord spoke to me. You are my son and today I have begotten thee. In this dialogue it is known that God is one God divided into three separate entities. The first is the Father. He speaks to his Messiah: You are my son, today I have begotten thee. The other is the Son Messiah. So he says of his father: The Lord speaks to me. The third is the Holy Ghost, the other part of the whole entity, who spoke the sentence and the whole psalm through David. 2R23. The spirit of the father has spoken through me and his words were spoken through my tongue.” A two-line inscription from Pastor Matthias Rossmeussell follows, in full (translated): “Believe in Christ the son of God so you will become an heir in the throne of God.” Below Luther’s signature is a second inscription in Latin by “M.R.,” in full [translated]: “O I declare myself fortunate, since I see this to be the hand of Luther, and from this I see the letters of Christ with all his obedience and through him I am saved.” In very good condition, with overall staining and soiling, a few small wormholes, and a stain to the lower left (possibly obliterating an inscription).

In the 16th century, this manuscript belonged to “M.R.,” whose two-line inscription is directly below Luther’s signature (before the date 1543); he was likely the original recipient. It then passed to Johannes Mylichius, Minister of the church in Panizsch. In the 17th century, it belonged to Matthias Rossmeussell, Pastor in Dornreichenbach (in the diocese of Grimma, near Chemnitz); Rossmeussell added his signature with a two-line inscription directly above Luther’s signature. The manuscript then resurfaced in 1926, when Chemnitz bookseller Otto Richter discovered it as a flyleaf of a folio Wittenberg Bible from 1541. Richter published his discovery in the Chemnitzer Allgem. Zeitung on February 18, 1926, before making the Bible available to the editors of Luther Werke, Weimarer Ausgabe, where the manuscript was published in 1927. It is unknown when the flyleaf was extracted from the Bible. It has since been sold by Christie’s (1993) and by Ira & Larry Goldberg Auctioneers (2010).

Penned in 1543, during Martin Luther’s final years, the content of this manuscript holds several features that are quintessential in Luther’s theology. Beginning with Psalm 2:7—a frequently quoted and intensely studied Psalm for Luther—he succinctly explicates the revelation of the Trinity as an accumulation of knowledge, gradually leading to understanding, in the same way that Christians come to learn it in the Bible. It begins with the knowledge of God, the Father; is followed by the introduction of Jesus Christ, the Son—whose revelation is also gradual, first as a man, then as the Son of God, and only then as God himself; and finally is completed with the Holy Spirit, established and confirmed by Jesus in the Scriptures. Direct and clear, this passage holds the universal accessibility of Luther’s best work, intended for the masses and not limited to the theological elite.

What is less typical about this piece is the period in which it was written and the encouraging tone it carries. Having spent over two decades in the spotlight, enduring years of struggle with Rome, antagonism with and among his fellow reformers, and unrelenting attention of virtually all religious parties, Luther’s health and patience had both significantly deteriorated by 1543. Suffering from Meniere’s disease, vertigo, and cataracts (among other issues), he had become harsh and intolerant, traits frequently reflected in his writings and commentary from this period. Thoughtfully inscribed into the Bible of a fellow theologian, perhaps a student of his own work, this manuscript is notable in its friendly doctrinal discussion, offering the ultimate encouragement to his recipient: “Believe and you shall be saved.” Exceptional not only in its extreme rarity, but also in its scriptural content and positive message, this is by far the most historically significant religious manuscript we have ever offered.

RR Auction would like to thank the following for their assistance with this item: Joel Lampe, Curator of The Bible Museum; Rev. Dr. Daniel N. Harmelink of Concordia Historical Institute; and Mirko Gutjahr of the Luther Memorial Foundation in Saxony-Anhalt.