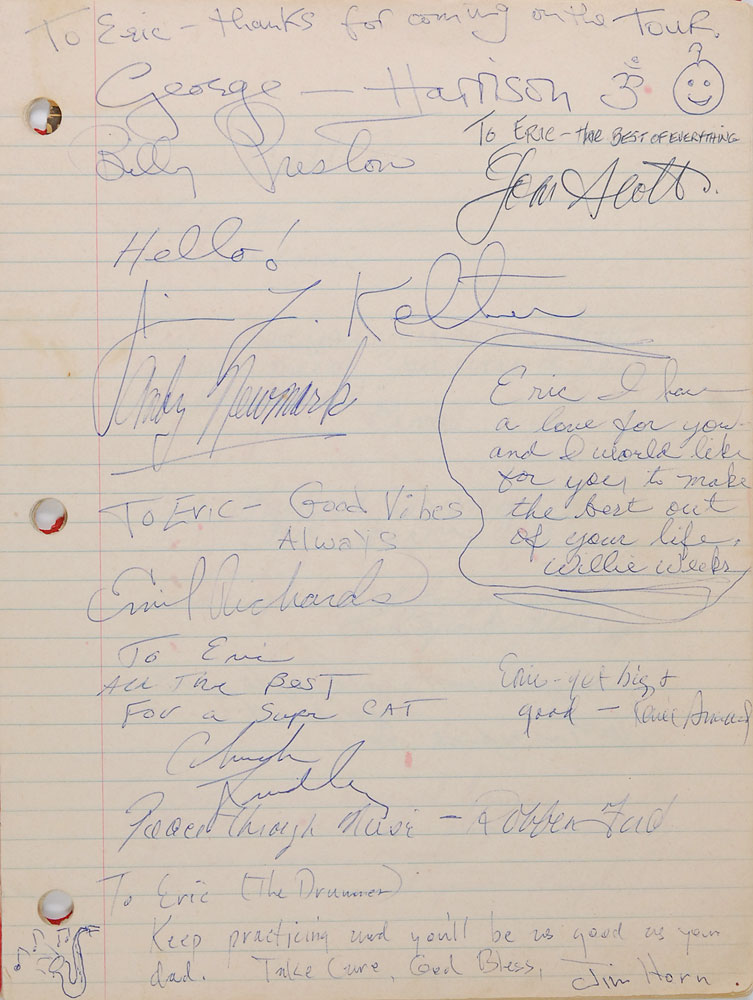 Unique travel diary kept by the young son of drummer Jim Keltner on Harrison's 1974 US tour, apparently done as a school project, 8 x 11, signed inside by many of the musicians, support staff, and visitors during the tour. The top of the first page is signed and inscribed in blue ballpoint, “To Eric—Thanks for coming on the tour, George Harrison,” and also signed by Harrison’s touring band members Billy Preston, Tom Scott, Jim Keltner, Willie Weeks, Andy Newmark, Emil Richards, Chuck Findley, Robben Ford, and Jim Horn, with most adding short inscriptions. Another page is signed by six others, including an excellent inscription and signature, “To Eric, with love from the invisible man, John Lennon.” A third page is signed and inscribed in blue felt tip, “To Eric, Ravi Shankar,” with members of Shankar’s band signing throughout the book, including: Katrick Kumar, L. Subramaniam, Viji [Shankar], Harihar Rao, Kumar Shankar, and Alla Rakha. The remaining pages consist of a well-done handwritten account of the tour by Keltner’s son Eric, with three ticket stubs affixed to the first page, and the introduction on the second page, in part: “We went on this tour because George Harrison wanted my dad to play in the band…So George said ‘Take your family with you!’ So we went.” The eight-year old then provides an almost daily summary of the events and cities they visited, adding in clipped newspaper articles, Canadian money, and postcards to enhance his entries. He notes that on December 13, “We were invited to the White House!…George Harrison, Billy Preston and Tom Scott ate lunch with Jack Ford. And then they talked to the President.” On the last show of the tour on December 20, he writes his most exciting entry: “I saw two old friends, John and Julian Lennon. Julian is my age and from England. We went to the last concerts. Everybody on the tour got up on the stage for the last song. And I played the tambourine. I thought the band did ‘Terrific.’” The boy’s teacher has made several comments on the reverse of one of the opening pages. A few loose pages, some red pencil corrections from the teacher, and some scattered toning to some of the pages, otherwise fine condition. The George Harrison–Ravi Shankar 1974 North American Tour was a 45-show concert tour of the United States and Canada during November and December. This adorable travel diary—which is impressively comprehensive and well-done, considering the writer’s age—is one of the most complete records of the tour that exists, and offers a unique behind-the-scenes perspective of life on the road. An exceptional, truly one-of-a-kind piece! Provenance: Christies, November 2013. Pre-certified Roger Epperson/REAL and RR Auction COA.