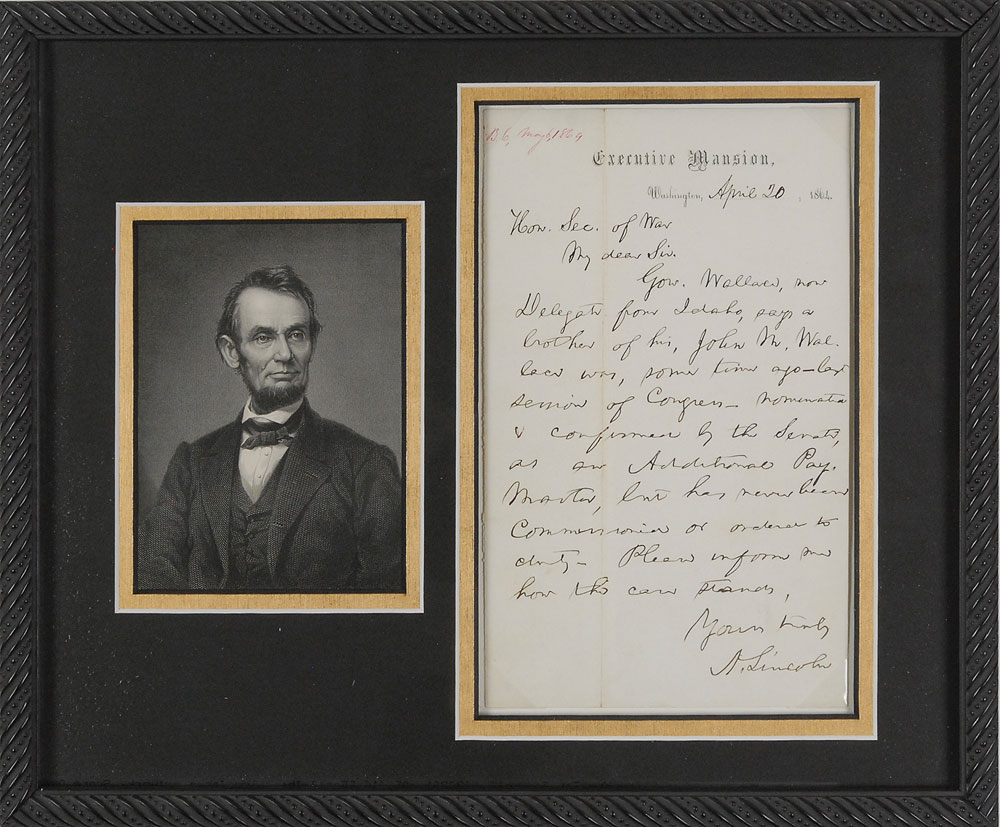 Civil War–dated ALS as president signed “A. Lincoln,” one page, 5 x 8, Executive Mansion letterhead, April 20, 1864. Letter to Secretary of War Edwin M. Stanton. In full: “Gov. Wallace, now Delegate from Idaho, says a brother of his, John M. Wallace was, some time ago—last session of Congress—nominated & confirmed by the Senate, as an Additional Paymaster, but has never been commissioned or ordered to duty. Please inform me how this case stands.” Appealingly double-matted and framed with an engraving of Lincoln to an overall size of 13.5 x 11. Two vertical folds (the leftmost quite heavy and professionally repaired, the rightmost passing through a single letter of signature), otherwise fine condition; a clean and attractive crisply penned letter.

William H. Wallace, a fellow Republican, had befriended Abraham Lincoln during the early 1850s, and they remained good friends until Lincoln's death—in fact, Wallace is reputed to have turned down Lincoln's invitation to Ford's Theatre on the night of the assassination. In 1863, after Wallace successfully lobbied Congress to establish Idaho as a territory, President Lincoln appointed him as the first governor of the Idaho Territory; by the time of this letter, Wallace had been elected as Idaho's delegate to the House of Representatives, which required him to vacate his position as governor. At Wallace's request, President Lincoln sent this inquiry to Stanton concerning his brother John M. Wallace, who had served as a delegate to the 1860 Republican National Convention that saw Lincoln elected as the party's presidential candidate. An exceptionally bold and desirable letter by Lincoln as president with this close association to a personal friend and Republican politics. Pre-certified John Reznikoff/PSA/DNA and RR Auction COA.