Immense collection numbering into the thousands, from Ronald Reagan and Moe Howard to Joe DiMaggio and Grace Kelly 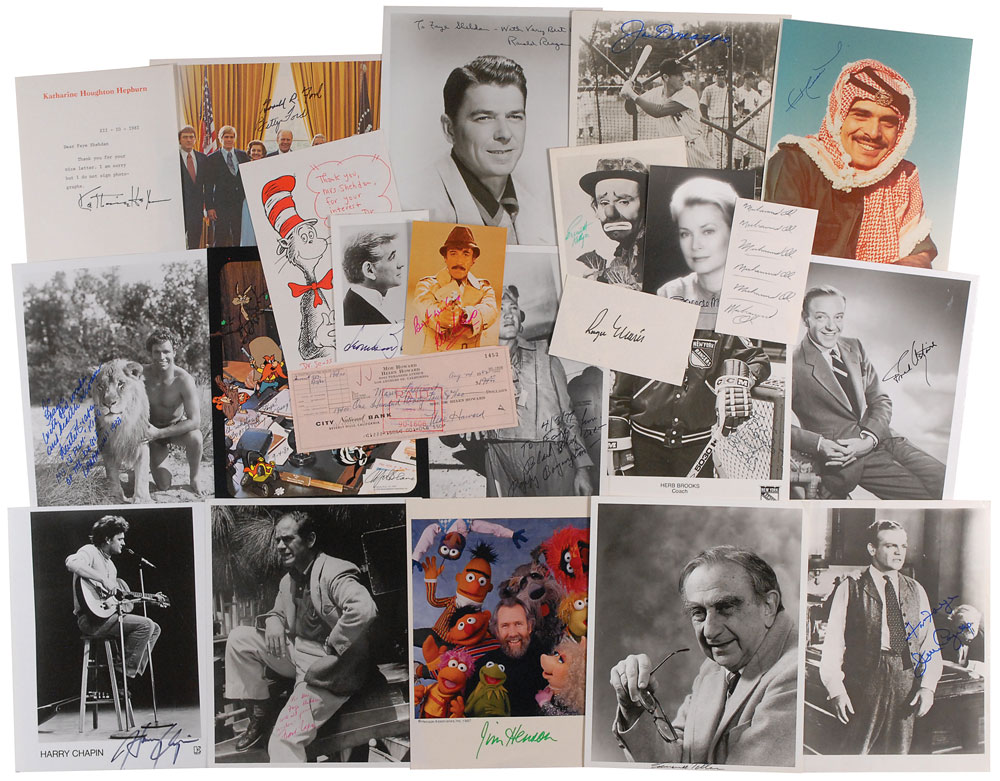 Immense collection numbering into the thousands, from Ronald Reagan and Moe Howard to Joe DiMaggio and Grace Kelly

Mrs. Faye T. Shehdan (1921–2008) began collecting autographs in 1974 and spent the next 30 years pursuing and corresponding with a vast assortment of famous figures, sending out thousands upon thousands of handwritten requests to these celebrities. Her mailbox brought the world to her doorstep and her passion gave her great joy. Here offered is Mrs. Shehdan's gigantic collection of 6,000–8,000 items, consisting predominantly of signed photos, letters, and signed index cards but also including some books, checks, magazines, and posters. Most signatures were obtained through the mail, and upon receipt Mrs. Shehdan painstakingly organized them in bins by category and, within category, alphabetically by name. Categories include: foreign dignitaries, politics, military, country, western, movies, TV, singers, astronauts, sports, and more. A selection of the signers is as follows.

Collection rates in overall very good to fine condition. A few secretarial and/or printed signatures may be included as there are thousands of signed items. Due to the enormity of the collection please be advised that extra shipping charges will apply. The sheer overwhelming volume of items precludes a list, and interested parties are strongly advised to view the collection in person at our offices, as this collection is sold as is, and no returns will be accepted. Large collections such as this are seldom offered as a whole, and there are certainly still many discoveries that lie within. RR Auction COA.