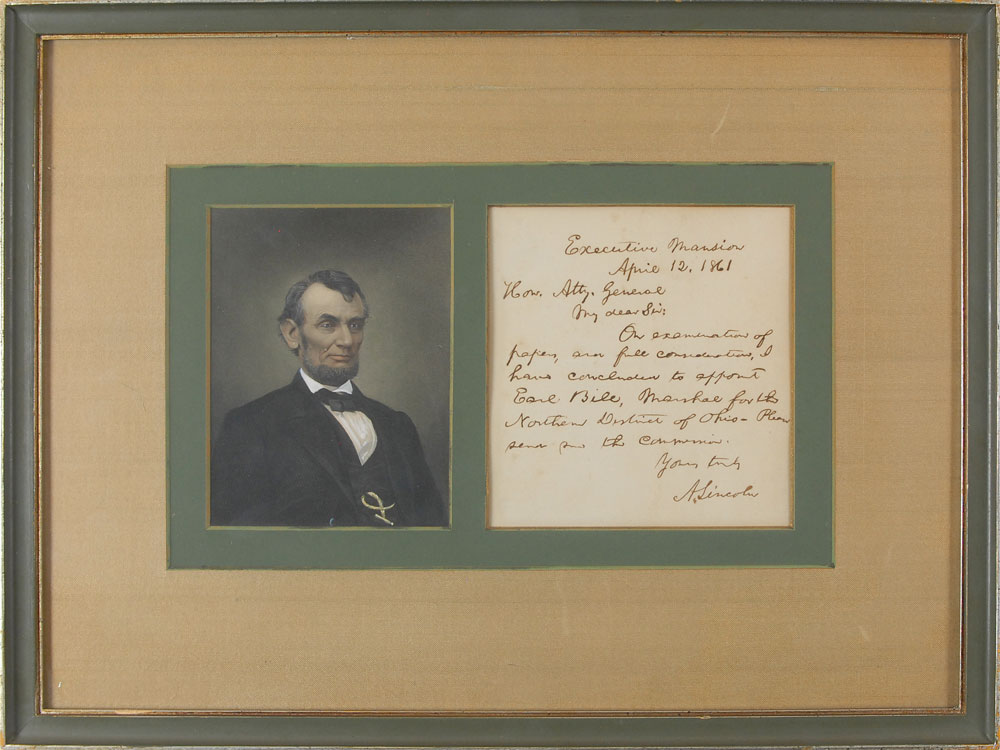 ALS signed “A. Lincoln,” one page, 5 x 5, April 12, 1861. Letter to Attorney General Edward Bates. In full: “On examination of papers, and full consideration, I have concluded to appoint Earl Bill, marshal for the Northern District of Ohio. Please send me the commission.” Double-matted and framed with a portrait of Lincoln to an overall size of 16 x 12. In fine condition, with central vertical and horizontal folds. Originally sold by Charles Hamilton, with his certificate of authenticity and wax seal affixed to reverse of frame.

Here offered is the only known letter completely in the hand of President Abraham Lincoln, written and dated by him April 12, 1861, the day the Civil War began. The president had endured an increasingly stressful week, overseeing the standard duties of his new office while attempting to hold the country together. Foremost on his mind was the besieged Fort Sumter in Charleston, where tensions grew as Robert Anderson and his federal troops—running short on supplies—refused to surrender to the looming Confederate Army. The effort to resupply the fort became the first crisis of Lincoln's administration, and he informed South Carolina's governor of his intention to dispatch non-military supply ships on April 6, knowing that this action could further incite Southern sentiment against the North—or worse. In response, at 4:30 am on April 12, by the order of Confederate General P. G. T. Beauregard, Fort Sumter began to be bombarded by the Southern forces surrounding it in the port of Charleston—the impending crisis came to fruition after Lincoln's day-by-day struggle to stabilize his beloved Union. News traveled slowly, however, and but for rumors the attack was not confirmed in Washington until the 14th—and so, on one of the most significant days in American history, it was 'business as usual' in the White House, with President Lincoln making a routine political appointment. At the time, Earl Bill had served one term in the Ohio Senate and was a delegate to the 1860 Republican National Convention in Chicago that resulted in Lincoln's nomination as the party's presidential candidate. A fantastic, boldly penned letter from this most important date. Pre-certified John Reznikoff/PSA/DNA and RR Auction COA.