Amazing archive of dozens of Rommel’s letters home during WWII: “In Russia the advance is proceeding exceptionally well and probably this empire will collapse within a few weeks. Then, England, watch out!” 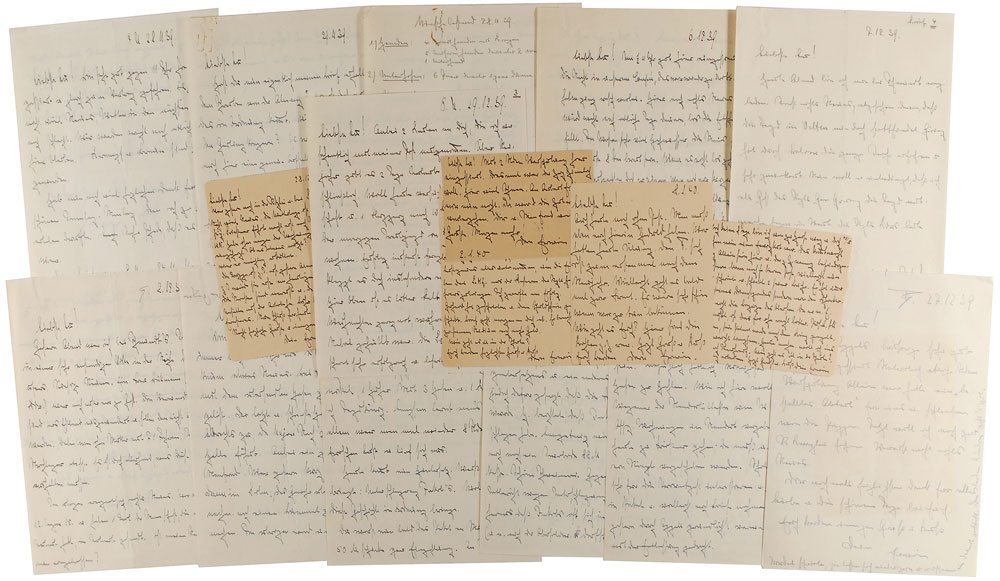 Amazing archive of dozens of Rommel’s letters home during WWII: “In Russia the advance is proceeding exceptionally well and probably this empire will collapse within a few weeks. Then, England, watch out!”

Large and historically important archive of World War II–dated correspondence between Erwin Rommel and his family, including 44 ALSs by the field marshal, most signed "Erwin," and more than 50 letters sent to Rommel, the vast majority by his wife Lucie and a few from his son Manfred. Nearly all of Erwin Rommel's letters are dated 1939–1940, with a handful coming between 1941–1944, while the correspondence from Lucie begins in 1942 and continues through 1944. Rommel's letters are absolutely remarkable, and present unique and intimate insight into the man known as the 'Desert Fox'—these are rife with fantastic content, with Rommel discussing everything from military life to Manfred's math homework. In his earlier letters, Rommel frequently describes his hunting trips, looks forward to his upcoming promotion to commander of the 7th Panzer Division, and expresses fatherly concern about his son's difficulties in algebra. As time goes on, he complains of snowy weather and a bad back, inquires about Manfred's involvement with the Hitler Youth, and references meetings with some of his most notable countrymen, including Hermann Goering and the "Fuhrer." He mentions various troop movements and alludes to a few different invasions, but rarely discusses any sort of military tactics or strategy, beyond expressing optimism for German success. Most of the letters are written on both sides of a single sheet, a few are multi-page letters, and five are one-page 'feldpostbriefe' letters, which are particularly interesting in that they are also signed "Erwin," but also addressed in his hand on the reverse, with "Rommel" appearing in both the recipient and return address areas. A selection of Field Marshal Rommel's letters, all written in German, follows (translated):

December 9, 1939—“Went to town yesterday for a short time and afterwards to see the movie 'Das Gewehr uber'…Right now people are buying like crazy. The stores have hardly anything in stock anymore. Everybody is panic-buying like mad for the most useless stuff. People are really stupid. What do you think about the article regarding relations between human beings? It is a product of Ribbentrop’s pen. It is important to tell those brothers [the British and Americans] the truth. Furthermore, if the situation continues, they will lose their entire fleet in the trade with England. Yesterday another 48,000 tons were sunk. And I am sure the best for us is yet to come." Though brief, this letter is remarkable in its implications—the movie he mentions seeing was a Nazi propaganda film produced to show the 'evils of democracy'; the Allies' had just begun their blockade of Germany to inflict economic strain, inducing panic in the stores for scarce supplies; and the day before, on December 8, the Germans had literally inflicted tons of damage to the UK's shipping force, sinking four British cargo ships via mine and torpedo.

December 12, 1939—“The hunt yesterday was very nice…I was the champion marksman with three hares and one rabbit. With time one learns how."

December 29, 1939—“Up here it is bitterly cold and it rained until Christmas, while the West was immersed in fog. The Fuhrer's trip to the front was obviously successful. My lieutenants returned satisfied as well."

January 2, 1940—“I bought ammunition in the city, since I left my new 40 cartridges…The Fuhrer might come tomorrow. The aides-de-camp are taking it easy."

January 5, 1940—“Last night I went to the 'warriors' evening' at Helleck's. It was nice but smoky, so today I have a slimy feeling in my nose. Apparently everything is being done to get the air force unit (F. M. 9.) out of General Goering's reserve. I doubt that it will succeed."

January 8, 1940—“I saw the Fuhrer today for the first time since New Year's. Maybe we'll go to the front soon. It would be very nice if we had something to do."

January 10, 1940—“Rhadau won't get the battalion because of his performance record. We are looking for a new person who would fit into those two positions. It should be someone who was successful in the Polish campaign." At this time they were seeking a replacement for Rommel, as he was to be promoted to command the 7th Panzer Division within a month's time.

January 15, 1940—“Yesterday we left Berlin…Despite the fog, wet and icy streets, everything so far has gone fine for us. We move only at night. During the day we disappear from view." This is a fascinating remark by Rommel, as it anticipates his leadership of the 7th Panzer Division, which became known as the 'Ghost Division' due to its elusiveness—Rommel led the division through France at such a fast pace that even German High Command had difficulty keeping track of their location, and Rommel would sometimes deliberately drop all communications with High Command if he felt the situation warranted it.

January 28, 1940—“I hope Manfred is feeling better…Does he always wear his ski boots with two pairs of socks in this cold weather? That is absolutely necessary when he is involved in sports and his Hitler Youth activities."

July 14, 1941—“I hope to see you in the not too distant future…In Russia the advance is proceeding exceptionally well and probably this empire will collapse within a few weeks. Then, England, watch out!" In overall very good to fine condition. RR Auction COA.