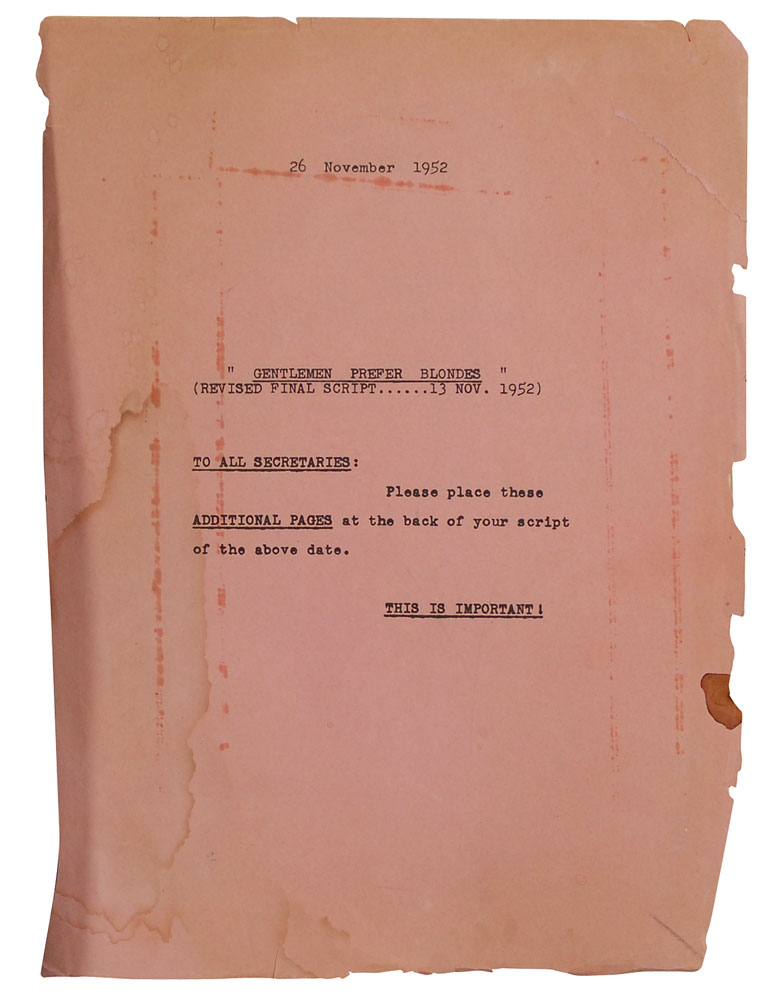 Monroe's personally-used and -notated script for the 1953 film Gentlemen Prefer Blondes. The incomplete script, 68 pages total, is titled on the cover “26 November 1952, ‘Gentlemen Prefer Blondes’ (Revised Final Script…13 Nov. 1952),” with a typed message at the bottom instructing secretaries to insert these pages in the back of their scripts. The majority of the parts for Monroe’s character Lorelei Lee have been circled in pencil or blue ballpoint, with approximately 22 pages annotated in various inks and pencil in Monroe's hand with amendments and additions to the script and notes on how she proposes to deliver lines and portray Lorelei's character. Notes include:

p. 56—the scene during which Beekman finds Lorelei stuck in Malone's porthole, next to Lorelei's line ‘Oh yes, tea with Lady Beekman. Why, she must of forgot. She didn't show up,’ with Monroe adding an alternative line, “Well, I just wanted to see the view. It's better from here”

p. 58—Monroe changes the line ‘Piggie, will you run down to my cabin and get my purse,’ to “Maybe I should have that Sherry - will you get me some”

p. 79—Monroe has written a note to herself in the margin “Feeling that feeds the words, know the lines, go over it intelligently”

p. 94—”grit my teeth and forget it must have my,” “all of feeling in my works,” and “build pull back, don’t stop spiritual conflict between partners.” The following page (95) although bearing no notations, features the scene for Monroe’s classic musical number ‘Diamonds Are a Girl’s Best Friend.’

In very good to fine condition, with expected handling wear, soiling, and creasing, and some small edge tears and dampstaining to cover page.

Marilyn’s amazing personal notations in this script reveal her private thought processes and well-documented fleeting self confidence. On set, she was shadowed by her distracting acting coach Natasha Lytess, constantly striving for her approval and insisting on retakes even when director Howard Hawks had already approved. Co-star Jane Russell looked after Marilyn on set and was often one of the only people able to coax her out of her trailer during her bouts of self doubt. Despite her anxieties, it was the role of Lorelei Lee that perfected her ‘dumb blonde’ persona—a genius mixture of comedy and sexiness only Marilyn could pull off. Though seemingly lighthearted on screen, she took her acting very seriously, as evidenced with heartfelt notes in the margins such as those on page 79, “Feeling that feeds the words, know the lines, go over it intelligently.” Monroe biographer Donald Spoto once said: ‘She put a twist on sexiness. It was not something wicked and shameful...it was something which was terribly funny. And Marilyn enjoyed it.’ An exceptionally profound piece of Hollywood history. Provenance: Christies: June, 2006. RR Auction COA.