The Roosevelts’ sacred Holy Bible, kept “in the family living quarters of the White House” 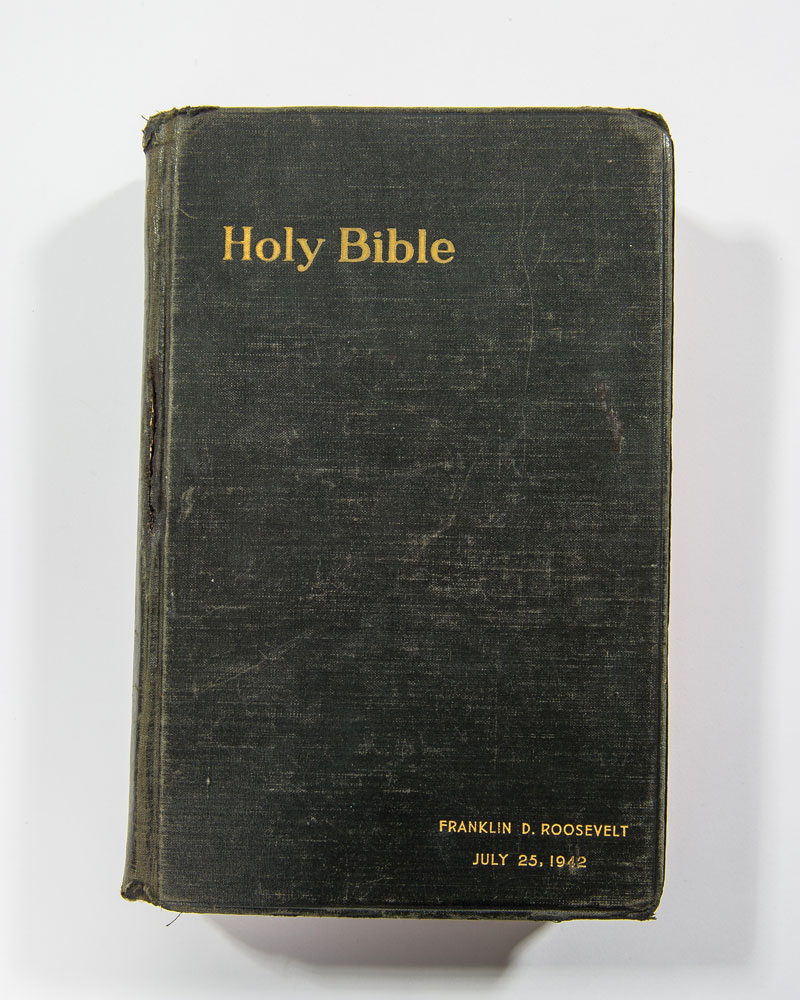 The Roosevelts’ sacred Holy Bible, kept “in the family living quarters of the White House”

President Roosevelt’s personally-owned hardcover edition of the Holy Bible. Cleveland: The World Publishing Company. Hardcover, 6.75 x 9.75, gilt-stamped on the lower right of the front cover, “Franklin D. Roosevelt, July 25, 1942.” The book bears FDR’s personal bookplate affixed to the first free end page, featuring his family coat of arms with their surname below, “Roosevelt.” Includes a detailed letter of provenance on White House letterhead from Lillian Rogers Parks, who was a best selling author as well as housekeeper and seamstress at the White House for over 30 years, from President Hoover through President Eisenhower. In part: “The Bible was one of those owned by President Franklin D. Roosevelt. It is engraved in gold color on the front with his [full] name and the [World War II] date, July 25, 1942…This Bible was in the family living quarters of the White House and not in the White House Library. I have seen it on more than one occasion. When the President passed away it was so sad…Shortly thereafter the First Lady, Eleanor Roosevelt, called a few White House staff members into her bedroom…Among other things I was given this Bible. It has meant a lot to me.” Also accompanied by photos of Lillian Rogers Parks with the Bible.

President Roosevelt was an Episcopalian and quietly spiritual leader, and while religion was a formative force in his life and politics—he occasionally invoked biblical passages in his speeches, and Christian social ethics certainly informed elements of the the New Deal—he was a strong advocate of freedom of worship, declining to use his international prominence as an evangelical platform. Of her husband's faith, Eleanor Roosevelt would reflect that 'it was a very simple religion' and she 'always felt Franklin’s religion had something to do with his confidence in himself.' In his renowned Four Freedoms speech, given on January 6, 1941, Franklin D. Roosevelt explicated the idea of free religion as one of America's chief ideological tenets, saying, 'The second is freedom of every person to worship God in his own way—everywhere in the world.' On the presentation date of this Holy Bible, July 25, 1942, President Roosevelt issued Executive Order 9205 to establish the President's War Relief Control Board, to oversee all charities 'controlling in the public interest charities for foreign and domestic relief, rehabilitation, reconstruction, and welfare arising from war-created needs.' This helped individual charities to become more efficient and cooperate in order to have the most effective impact on the nation. This presents a nice connection to President Roosevelt's first Inaugural Address, given nearly a decade before on March 4, 1933, in which he invoked the language of scripture to invigorate the depressed American spirit, saying, 'The money changers have fled from their high seats in the temple of our civilization. We may now restore that temple to the ancient truths. The measure of the restoration lies in the extent to which we apply social values more noble than mere monetary profit…These dark days will be worth all they cost us if they teach us that our true destiny is not to be ministered unto but to minister to ourselves and to our fellow men.' A truly epochal offering worthy of the finest collection or institution.