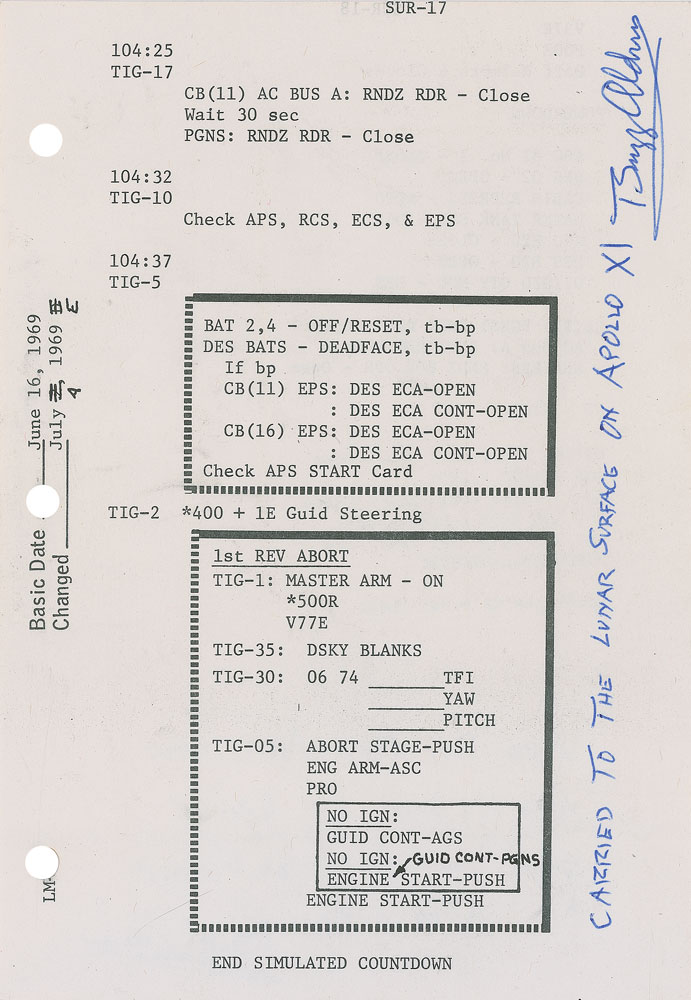 Accompanied by a letter of provenance and explanation signed by Aldrin, which reads: “Accompanying this letter is a sheet numbered SUR-17 and SUR-18 from the Apollo 11 LM Lunar Surface Checklist, Part No. SKB32100074-363, S/N 1001. The checklist was taken to the Moon on the flight of Apollo 11 during July 16 to 24, 1969. Then the entire checklist, including this sheet, was carried to the surface of the Moon in Lunar Module Eagle during the first lunar landing on July 20, 1969. This sheet has the important steps Neil Armstrong and I performed in Eagle just minutes after history's first manned lunar landing.

Neil made a beautiful landing. The Lunar Module was automatically targeting us into a large boulder-filled crater. He expertly maneuvered Eagle away from that crater and landed us with less than 30 seconds of descent engine fuel remaining. After landing we started the series of procedures as listed in the initial pages of the Lunar Surface Checklist. The pages before SUR-17 included a series of star sightings to align our navigational equipment to our exact position we now called ‘Tranquility Base.’

Side SUR-17 has the steps of a simulated countdown Neil and I performed in case an emergency liftoff from the lunar surface was required. We could leave the Moon at several predetermined time intervals if needed after we were given a ‘GO’ for an extended lunar stay. These time intervals coincided with the lunar orbital period of CSM Columbia which was piloted by Mike Collins. We could leave the Moon if needed 2 hours after landing once Columbia was in the proper position for rendezvous. At 104:25 mission time, we started the countdown which was TIG of Time to Ignition minus 17 minutes. Two heavy lined—dashed lined boxes list critical steps to enable an actual liftoff. The first box includes battery and circuit breaker settings. The second box has the steps for the last minute of countdown including ‘ABORT STAGE-PUSH, ENG ARM-ASC, PRO, ENGINE START PUSH.’ The small box has steps to perform if we did not get ignition. The last line reads, ‘END SIMULATED COUNTDOWN.’

Side SUR-18 has the ‘POWERDOWN’ steps Neil and I performed once the countdown was over. We did this series of steps just after removing our space suit helmets and gloves. Several steps required setting circuit breakers to either open or closed on panels 11 and 16. In just a few hours after the completion of these steps, Neil Armstrong and I became the first humans to walk on another celestial body, the Moon. This sheet has been in my private collection since 1969.” Luckily, this contingency liftoff was not necessary, and after the LM was placed in a ‘safe’ condition, the crew could then begin to focus on their next major task—walking on the moon. Pre-certified Steve Zarelli and RR Auction COA.