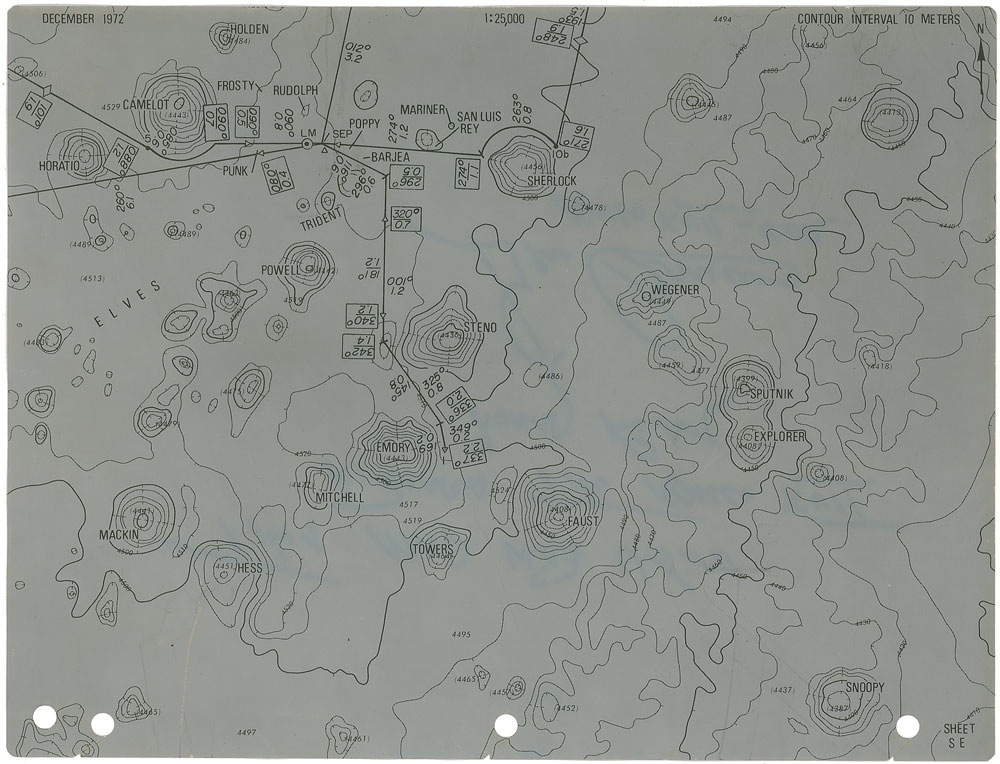 Amazing and mission-critical flown lunar rover topographical map, used on the lunar surface to help navigate the rover during the Apollo 17 mission. Chart measures 10 x 8, and is labeled in type, “Sheet S E,” “Contour Interval 10 Meters,” and “December 1972.” Chart identifies the landing area for the lunar module, shows planned routes for the rover, and also shows the contour of the lunar surface as well as identifying all of the craters in the area. Craters include: Snoopy, Sputnik, Sherlock, Camelot, Emory, and Steno. Also labeled on the map are “Station 5,” an important stop during the second EVA, as well as “Gabbro,” which was an important discovery in the formation of the Taurus-Littrow region. Map is signed on the reverse in black felt tip, “This map was used aboard the Apollo XVII lunar rover. Gene Cernan, Apollo XVII CDR.” In fine condition, with three punch holes to bottom edge and a few scattered light surface creases.

Accompanied by a 2010 certificate of authenticity from Cernan, which reads, in part: “This is to certify that the accompanying Lunar Rover Topographical Map…was used by me to help navigate while driving the Apollo 17 lunar rover on the moon…We had a series of maps specifically intended for use in conjunction with our lunar rover to navigate across the valley’s surface. The maps were contained in the book, ‘LM Lunar Surface Maps,’ which was carried in the rover on the lunar surface…This lunar map has spent 22 hours and 3 minutes on the lunar surface…This lunar rover map is one of the few objects actually used directly on the Moon’s surface.” Arguably one of the most important lunar surface relics, as this map was crucial to the mission’s extensive scientific exploration of the Moon. Pre-certified Steve Zarelli and RR Auction COA.