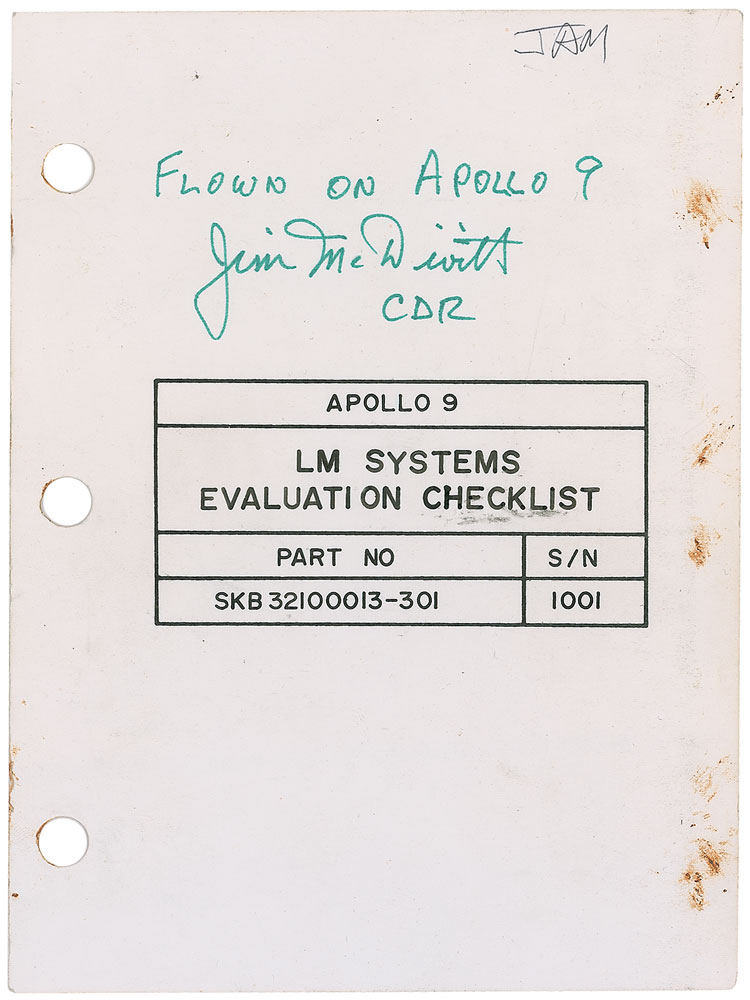 Extremely rare, complete Apollo 9 LM Systems Evaluation Checklist, flown on board the Lunar Module ‘Spider,’ measuring 6 x 8, consisting of 79 heavy cardstock pages, and bound by its original three rings in the left edge. Printed on the front cover is “APOLLO LM Systems Evaluation Checklist, PART NO SKB32l000l3-301-301 S/N 1001.” Pages are divided by over 30 tabs along the right edge, and includes the flight plan, star charts, film logs, emergency procedures, and other various burns and tests. Checklist also include handwritten notes and filled-in tables on procedures including LM Gimbal Angle alignments, TV Camera preparation, and star charts, as well as some crossed out instructions and checkmarks throughout. Signed on the front cover in green felt tip, “Flown on Apollo 9, Jim McDivitt CDR.” In fine condition, with some light soiling along cover edges.

Accompanied by a 2010 letter of authenticity from McDivitt which reads, in part: “This is to certify that the accompanying Apollo 9 LM Systems Evaluation Checklist…was flown into Earth orbit in March 1969…This Apollo Flight Data File (FDF) has remained a treasured part of my personal space collection for forty-one years, ever since NASA presented it back to me in 1969.” The Apollo 9 crew spent ten days in Earth orbit, performing the first manned flight of a lunar module, the first lunar module extraction, and two spacewalks. McDivitt, along with Rusty Schweickart, test-flew the lunar module, in which this manual would have been used. All systems and tests were successful, setting the stage for the upcoming lunar landing. Pre-certified Steve Zarelli and RR Auction COA.