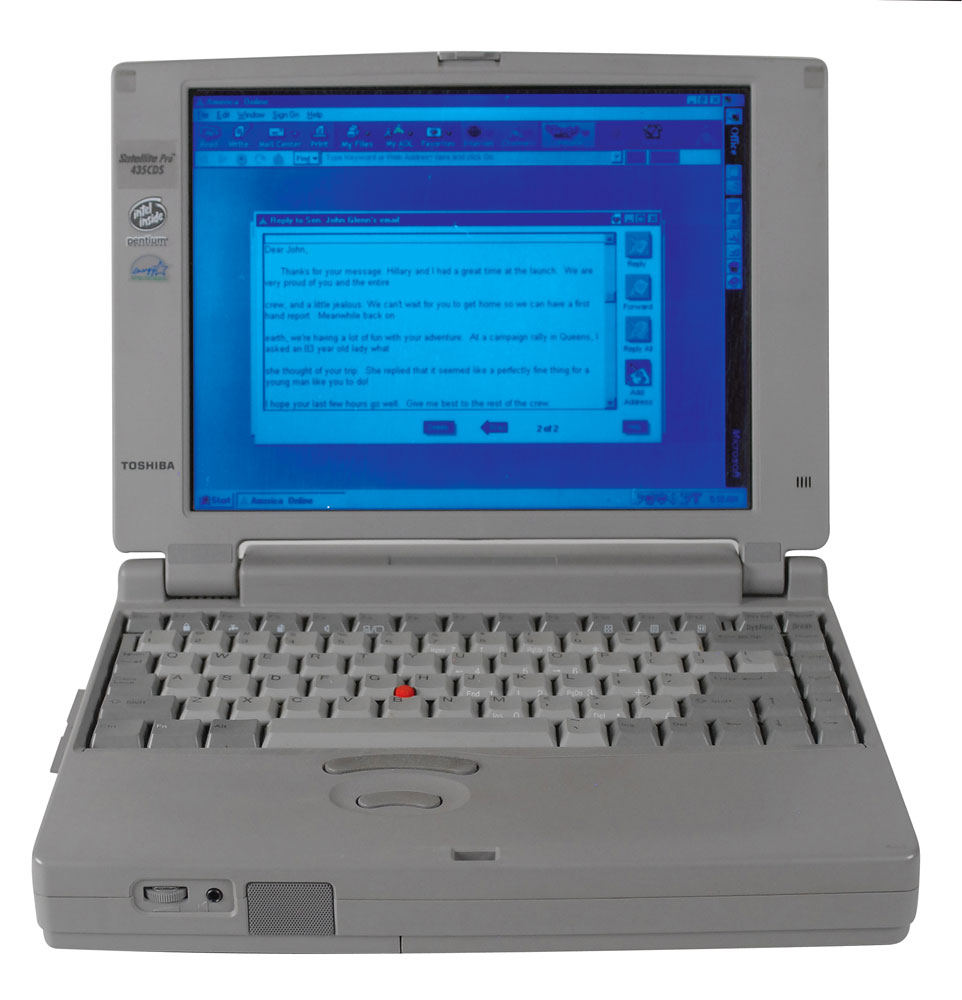 Extremely well-documented Toshiba Satellite Pro laptop computer used by Bill Clinton to transmit the first-ever presidential email, sent to John Glenn while he was in outer space during NASA’s STS-95 mission. The laptop is complete with its external floppy drive, a floppy disk, and power cords. While orbiting Earth aboard Space Shuttle Discovery on November 6, 1998, Glenn sent President Clinton an email that read, in part: “This is certainly a first for me, writing to a President from space, and it may be a first for you in receiving an E mail direct from and [sic] orbiting spacecraft. In any event, I want to personally thank you and Mrs. Clinton for coming to the Cape to d/see [sic] the launch. I hope you enjoyed it just half as much as we did on board. It is truly an awesome experience from a personal standpoint, and of even greater importance for all of the great research projects we have on Discovery. The whole crew was impressed that you would be the first President to personally see a shuttle launch and asked me to include their best regards to you Hillary. She has discussed her interest in the space program with Annie on several occasions, and I know she would like to be on a flight just like this one. We have gone almost a third of the way around the world in the time it has taken me to write this letter, and the rest of the crew is waiting.”

On the morning of November 7th, Clinton responded, in full: “Thanks for your message. Hillary and I had a great time at the launch. We are very proud of you and the entire crew, and a little jealous. We can't wait for you to get home so we can have a first hand report. Meanwhile back on earth, we're having a lot of fun with your adventure. At a camp rally in Queens, I asked an 83 year old lady what she thought of your trip. She replied that it seemed like a perfectly fine thing for a young man like you to do! I hope your last few hours go well. Give my best to the rest of the crew.”

Both of these emails are preserved on the laptop’s hard drive and backed up on the included floppy disk, and remain accessible via the AOL application on the computer. This laptop belonged to White House physician Commander Robert G. Darling of the United States Navy Medical Corps, and includes a color satin-finish 10 x 8 official White House photo of Clinton and Darling together with the computer, signed and inscribed in the lower border as president, “To Rob Darling—with thanks not only for keeping me healthy but for getting my message into outer space!—Bill Clinton.” With this is Darling's letter to Clinton on White House letterhead, September 4, 1999, requesting that he sign the photo.

The extensive accompanying documentation consists of a two-page typed memo on White House letterhead by Darling explaining the circumstances that led to the email exchange on his computer, a copy of a letter from the Department of the Navy advising Darling that it is legal for him to sell the computer, a typed letter by Darling explaining various specifics about the computer itself, and instructions on how to access the email files.

In early 2000 President Clinton commented that he did not use email because of security concerns, and was quoted in an interview with a New York reporter: ‘I e-mailed John Glenn in space. And I e-mailed some Marines and sailors on a ship at Christmas. That was it.’ This is a remarkable museum-worthy collection that represents the dawn of a new age, combining America’s greatest technological achievements—space travel and the internet—in spectacular fashion. RR Auction COA.