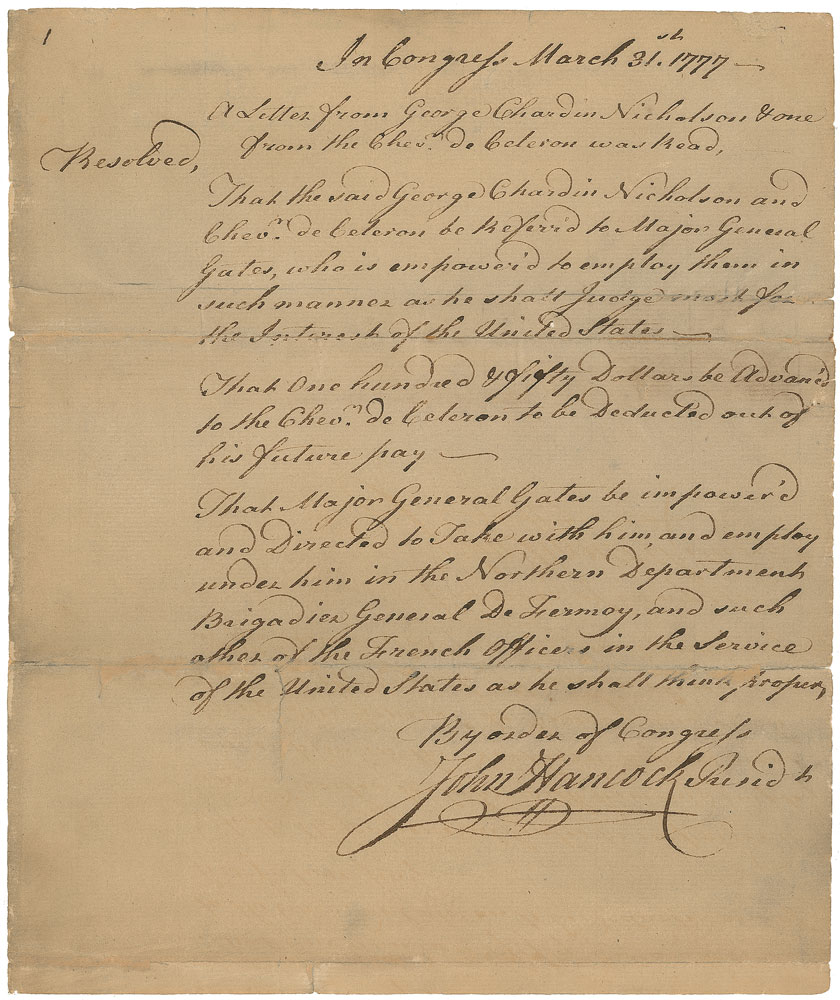 Beautiful Revolutionary War–dated ADS, signed “John Hancock, Presdt,” one page, 8 x 9.5, “In Congress” March 31, 1777. Resolution reads, in full: “A letter from George Chardin Nicholson & one from the Chevr. de Celeron was read. Resolved, That the said George Chardin Nicholson and Chvr. de Celeron be referr’d to Major General Gates, who is empower’d to employ them in such manner as he shall judge most for the Interest of the United States.

That One hundred & fifty Dollars be Advanc’d to the Chevr de Celeron to be deducted out of his future pay.

That Major General Gates be impower’d and Directed to take with him, and employ under him in the Northern Department Brigadier general De Fermoy and such other of the French Officers in the Service of the United States as he shall think proper. By order of Congress.” Document is affixed by the reverse of its left edge to a slightly larger off-white sheet. In very good to fine condition, with well-done repairs to separations along horizontal folds, a few other small repairs, and a few pinhole size areas of ink erosion. Previously sold as a part of the collection of renowned Abraham Lincoln collector Oliver R. Barrett.

When armed rebellion broke out in the colonies in 1775, many in France sympathized with the revolutionary cause. Their aid to the American patriots began quite early in the war, sending supplies like gunpowder, arms, and uniforms. Shortly thereafter, French soldiers began to enlist in the Continental Army—of those mentioned in this document, Matthias Alexis Roche de Fermoy was the fist to join, becoming one of several foreign officers appointed to command positions in 1776, along with the likes of the Marquis de Lafayette. The other two—George Chardin Nicholson and Louis de Celeron—were assigned to separate but important brigades, with Nicholson leading a detachment of French cadets in Livingston's Battalion and Louis de Celeron eventually joining Pulaski's Legion, one of few cavalry regiments. Also of note is that Hancock penned this document as president of the Continental Congress, a body instrumental in securing French aid during the war. Most importantly, they negotiated the Treaty of Alliance in 1778, by which France officially recognized the sovereignty of the United States and promised military support. With these numerous associations, this is a remarkable document representing this crucial partnership between nations during the American Revolution. Pre-certified John Reznikoff/PSA/DNA and RR Auction COA.