Used by President Roosevelt to toast the end of Prohibition 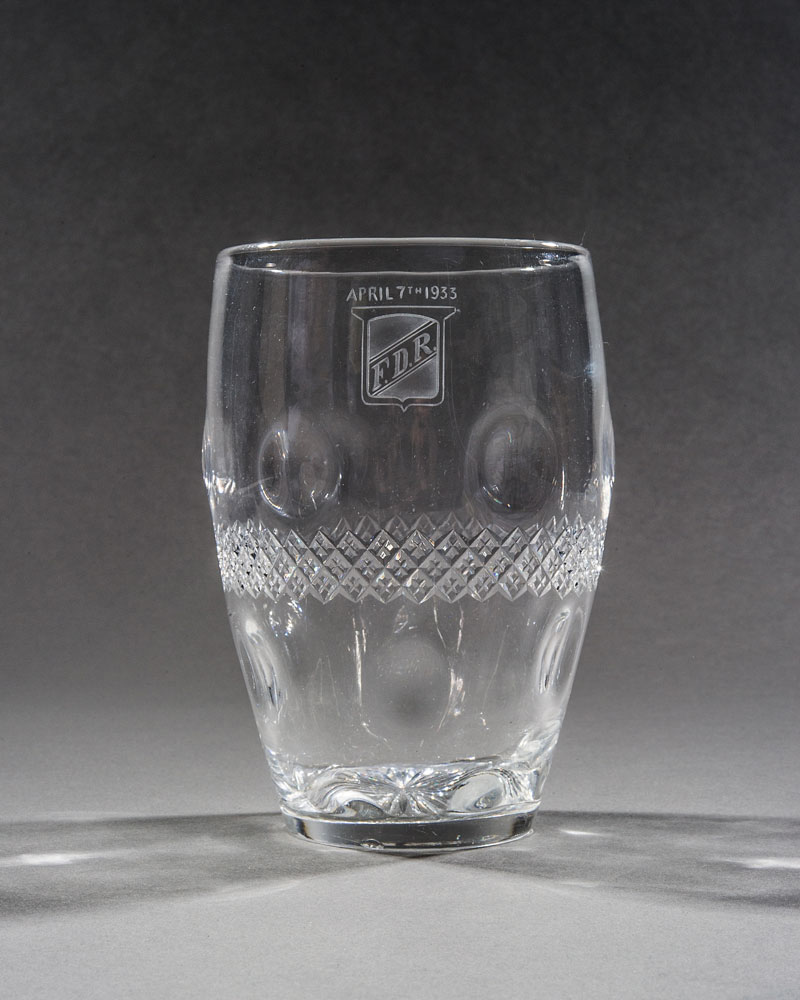 Used by President Roosevelt to toast the end of Prohibition

President Roosevelt's magnificently detailed drinking glass, used at the White House on April 7, 1933, to celebrate the date the Cullen-Harrison Act went into effect allowing the sale of beer with alcohol content of 3.2% or lower, which was the first step toward the complete repeal of prohibition. After using the glass in a toast to the significant event, the president gave it to a favored maitre-de, Charles Ficklin. The glass is of an appealing design with a bulge pattern on the exterior and thin diamond band engraved in a ring around the center, etched near the top with the historic date, “April 7th 1933,” and the president’s initials in a crest below, “F. D. R.” The glass measures 5.25″ tall with a 3.25″ diameter at the rim, and the base is engraved with an elegant starburst pattern. In fine condition. Charles Ficklin served as a maitre-de at the White House from 1947 through 1967; all together, nine members of the Ficklin family were employed at the White House through the years, including his brothers John and Samuel, with each having been acquainted at some point with Raleigh DeGeer Amyx. Includes a detailed two-page letter of provenance on White House letterhead from James Ficklin, the son of Charles. In part: "On April 7, 1933, FDR signed the repeal of the 'Volstead Act' legalizing 3.2% beer. This paved the way for the ratification of the 21st amendment which…ended prohibition altogether…This handsome 5″ glass (one of my father's prized possessions) was used in the White House, on April 7, 1933 for a special glass of beer for President Franklin D. Roosevelt. The quality glass (cut crystal) was designed with a deeply ridged etching encircling the glass (for better grip), as well as handsome 'bubbled' motif with etched date, 'April 7, 1933,' and etched 'FDR' in a handsome crest. This glass was given to my father, Charles Ficklin (1913–1977), who was Maitre de of the White House from FDR through LBJ."

This extraordinary glass represents what was arguably the most socially impactful laws passed during Roosevelt's administration—while running for president in 1932 Franklin D. Roosevelt made the repeal of prohibition part of his platform, and he signed the Culen-Harrison Act into law within weeks of taking office. It became effective on April 7, upon which a caravan of Milwaukee brewers—Blatz, Schiltz, Pabst, and Miller included—drove crates of their beer to Milwaukee Airport to be delivered to the president in Washington, carried aboard a plane appropriately christened 'The Spirit of 3.2.' This exceptional beer glass represents an important moment in American history, used by FDR to celebrate his first major progressive victory as president.